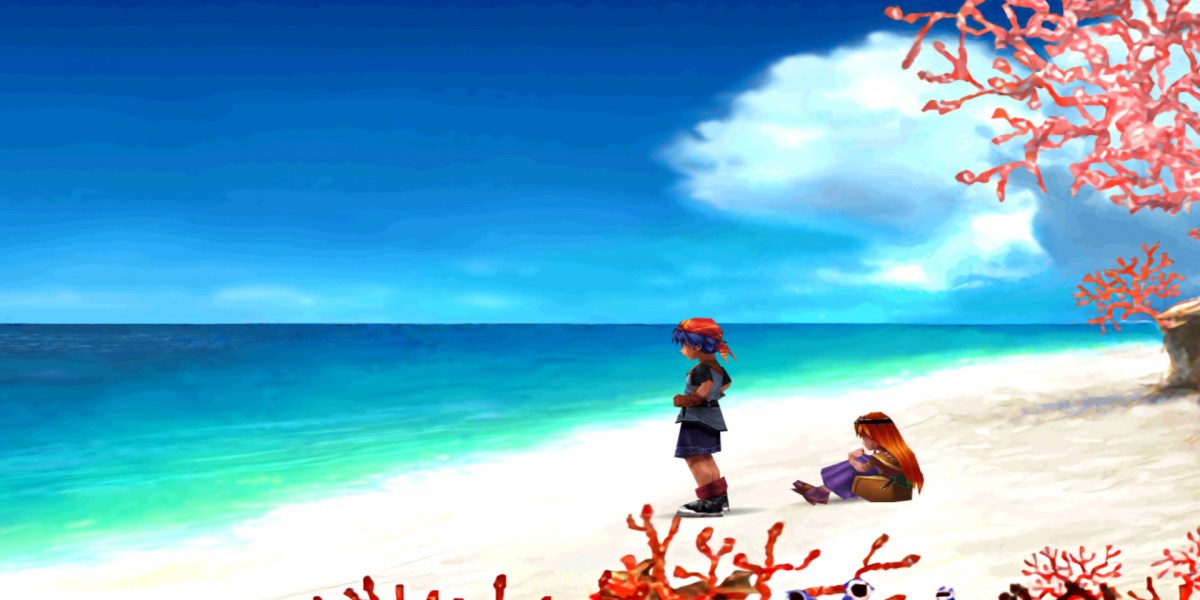 I’ve been eagerly waiting for years for Chrono Cross to move beyond the PlayStation 1. I first played the game in 2000 and have been a big fan ever since. Seeing its remaster announced was, naturally, a huge deal to me, and I’d been greatly looking forward to it. Chrono Cross: The Radical Dreamers Edition is finally available, so I jumped in as soon as I could. This is, undeniably, the same great game as ever, but this honestly isn’t quite the remaster I’d hoped for, even if the results are still more than playable. For most, at least. But the question stands, is Chrono Cross: The Radical Dreamers Edition worth it?

Chrono Cross: The Radical Dreamers Edition is a compilation of the titular game alongside Radical Dreamers, a 1996 visual novel that was later expanded into Chrono Cross itself, with the game’s events being part of the latter game’s alternate worlds. It was translated by fans years ago, but this is the first time it has ever been officially available. It’s not long, clocking in at around four hours or so, but it’s easy to see why someone would want to expand it into a full game. Any series fan that didn’t get around to the fan translation will likely enjoy themselves.

Chrono Cross itself is obviously the main attraction here and, truthfully, it has maintained much of its charm and quality, even over 20 years later. You start the game as Serge, a teen who lives in Arni Village with his mother. One day, his girlfriend, Leena, asks him to collect komodo dragon scales so that she can make a necklace, and they meet on a nearby beach afterward. While soaking up the ambiance, Serge hears a strange voice and is hit by a wave before waking up in a slightly different world. One major difference is that, in this world, he died 10 years prior. His mother is gone as well, and Leena only remembers him as the dead boy that lived next door. 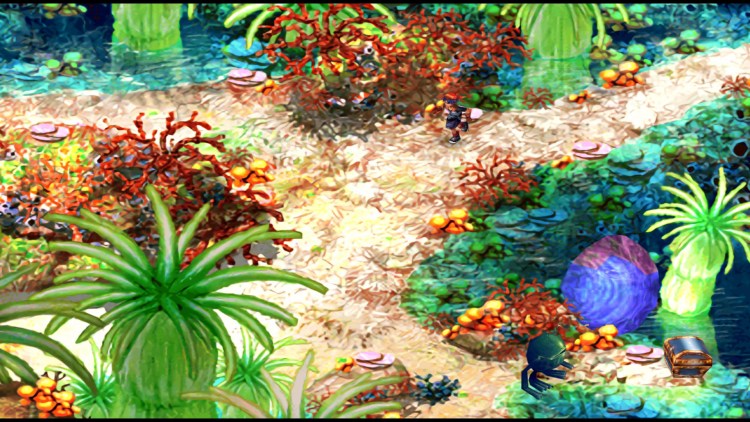 What wizard did this to you?!

It’s a fairly heartbreaking opening, and the story only ratchets up from there, seeing Serge and his ever-growing, massive number of companions go up against the machinations of a cat-faced man called Lynx. There are some enormous twists along the way that turn the story on its head, which ensured that Chrono Cross‘s story has stayed very meaningful to me. It also ties in with Chrono Trigger in some truly interesting ways.

Gameplay-wise, Chrono Cross is a mostly standard turn-based JRPG that’s a lot like other games of its time. Backgrounds during exploration are all pre-rendered, you find and equip different kinds of magic, and you go on a sprawling adventure. The game’s combat was always very fun for me. Each character starts battles with full stamina and can attack using light, medium, and heavy strikes. But the chance of landing lighter strikes is better, although your accuracy during that turn increases each time you land a blow. It’s a fairly unique system that I think has aged fairly well, all things considered.

Landing hits builds up levels that you use to cast elemental spells. One of the most bizarre things about Chrono Cross’ combat is that you can only use a spell one time per battle, which is kind of annoying. Granted, you’ll have enough equipped that this isn’t a huge deal, but it’s a nifty way of not having to deal with mana points. In classic Square fashion, spells are large and flashy and you can elect to choose their ability levels based on how you allocate them. There are a ton of elements to use, plus there’s a system in place where repeatedly using elements until you change the field’s element color to the one in question, which will increase that element’s damage. 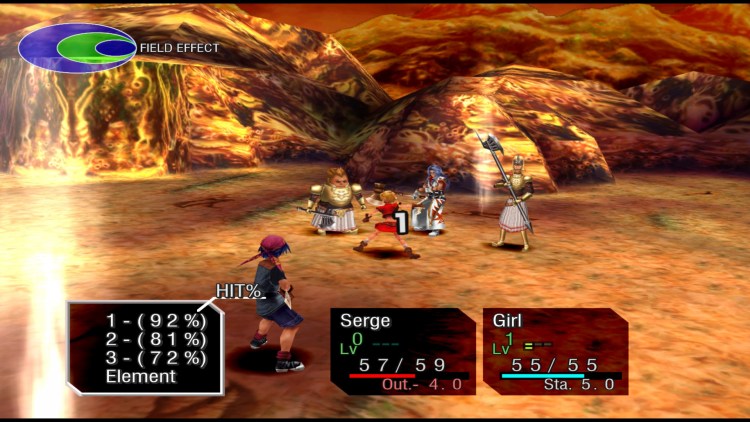 So, yes, Chrono Cross is still a wonderful game. This remaster, on the other hand, could have been better. For one, people figured out how to get the game to run at 60 fps in emulators a while ago. But the framerate here is low and erratic. Character movement is choppy, camera movement judders. It just looks and feels kind of bad, often even worse than it’d be in an emulator. The initial announcement trailer also showed off some nicely remastered FMVs, which are nowhere to be seen here. They’re all horribly grainy and artifacted to hell and back. The trailer was purely misleading.

Plenty of people are also experiencing large amounts of crashes or instances of rooms not loading. Character models, while notably improved in battle, still have that jittery paper-mache look that the PlayStation 1 was plagued by, leading some to wonder if this is an emulation and not actually a port. You can choose between classic and “new” graphics in the launcher. The main differences are the aforementioned character models, a new font, new character portraits, and a filter for the background. The background filter is one of the more irksome issues in Chrono Cross: The Radical Dreamers Edition.

It doesn’t look bad, but, a few years ago, fans AI-upscaled the backgrounds and put them in the game. Alongside the 60 fps patch, Chrono Cross: The Radical Dreamers Edition isn’t even close to the best-looking or even best-feeling way to play Chrono Cross, especially for people who are playing on PC. I’m not confident any of this will get improved, either. Thankfully, the game is pretty beloved, so I’m sure some modders will be more than happy to make this version more on par with how people with emulators have been experiencing the game for some time. It’s just a shame that such an amazing game got such a lackluster remaster. 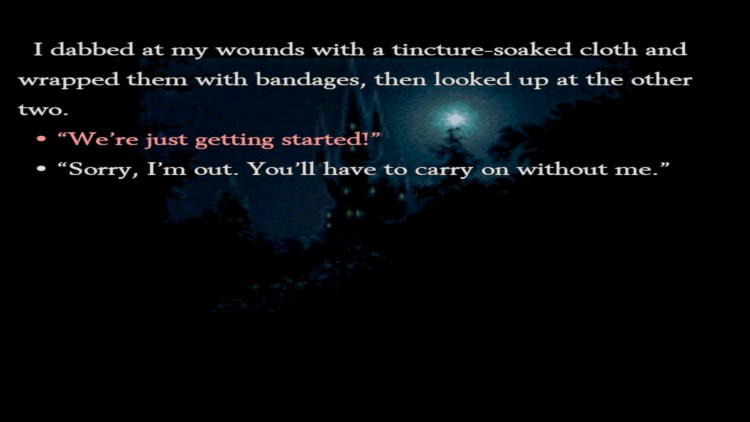 Chrono Cross: The Radical Dreamers Edition is likely worth it at $20 considering how many hours of greatness it contains. However, a lot of people will honestly still be better off playing the better emulated version, at least until this one gets sufficiently modded. On the other hand, this version has some quality of life features, but the best of these (fast forward) is also available on emulators. The others (invincibility, auto-battle, turning off random encounters) won’t be all that interesting to people who already loved the game. This is all fairly disappointing, but Square Enix almost always flubs these remasters, so I can’t say I’m all that surprised. I look forward to seeing what the modders can do with things, though.

How to get your Call of Duty: Vanguard multiplayer career report

By Alexa BeMent2 days ago
Guides