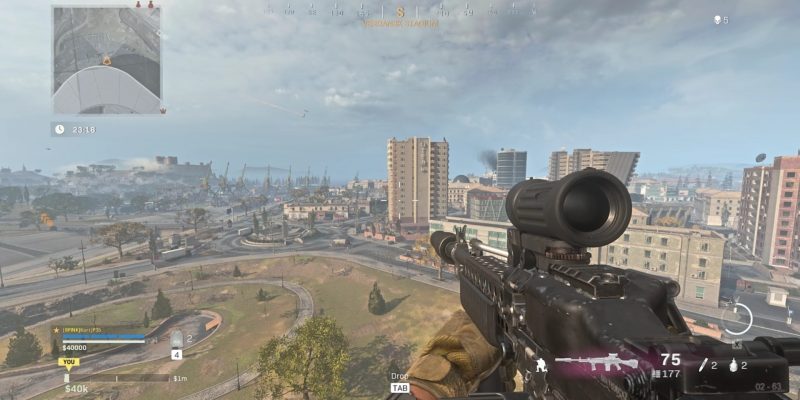 It’s no secret that light machine guns are strong in Call of Duty: Warzone. Ever since the Bruen meta, most players are aware of the potential lying in Call of Duty‘s heavy hitters. But, even then, there is one gun that Warzone players have been sleeping on for months: the Stoner 63. And although it’s not top tier as things stand, it’s one buff away from entering the meta.

Despite hardly appearing in the meta, the Stoner 63 has some of the best on paper stats in the game. Its damage profile of 37-30 results in a theoretical time to kill of between 568 and 651 ms. This alone is impressive, but when combined with its incredible suppression power, thanks to its stock 75 round magazine, the Stoner 63 becomes one of the best team-wiping weapons in Warzone. However, you do have to build it in a very specific way, as currently several attachments are bugged and do not work as intended.

As with most light machine guns, the Stoner 63 excels at medium to long range. Its slow aim down sight time cannot be fixed regardless of what attachments you put on it. So, instead of wasting slots trying to make it something it isn’t, you’re better off tuning it to specialize at winning long-range engagements. Naturally, this means that most players will want to run either overkill with a close-range switch, or pick up a second loadout. The typical meta close-range weapons such as the Mac 10, MP5, and Bullfrog all work well.

Perhaps the most puzzling choice of attachments at a glance is the 17.8″ Cavalry Barrel. According to the in-game stats, all this barrel does is increase your vehicle destroying capabilities by 50%. However, the reality is that this barrel is far stronger than that. Due to a current bug in Warzone, the Cavalry Lancer increases bullet velocity by a staggering 80%. That increase will make the Stoner 63 feel like a hitscan weapon up to around 250 meters, resulting in the Stoner 63 becoming a fantastic choice for gunning any parachuting enemies out of the sky. 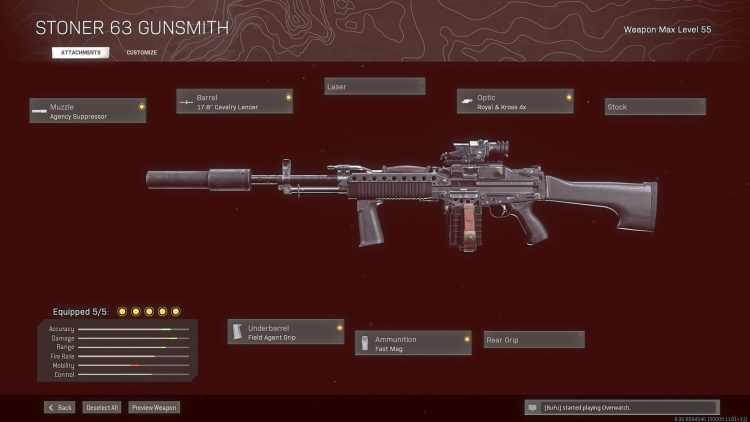 Your choice of sight is a personal preference, but I’d stray away from lower magnification optics. The many reflex sights and Quickdot LED don’t suit the Stoner 63’s slower handling, long-range capabilities. They are perfectly usable, but you’re just going to make it harder to land those trickier long-distance shots. The same can be said for its iron sights. I personally like the Royal & Kross 4x with the custom Killshot reticle. Other similar optics such as the SUSAT Multizoom and PVS-4 Thermal are good alternatives. If you feel uncomfortable using 4x optics, the Visiontech 2x provides a good balance of range and handling.

Now, onto magazines. Honestly, the Fast Mag isn’t the most impactful attachment on the Stoner 63. It will shorten your reload time by around 25%, dropping it from 4.5 seconds to 3.4 seconds. However, this improvement is still substantial and since the rear grips are currently bugged and don’t do anything, this is probably still one of the best attachments available. Alternatively, the 120 round magazine can also be good if you care more about suppression potential than reload speed. 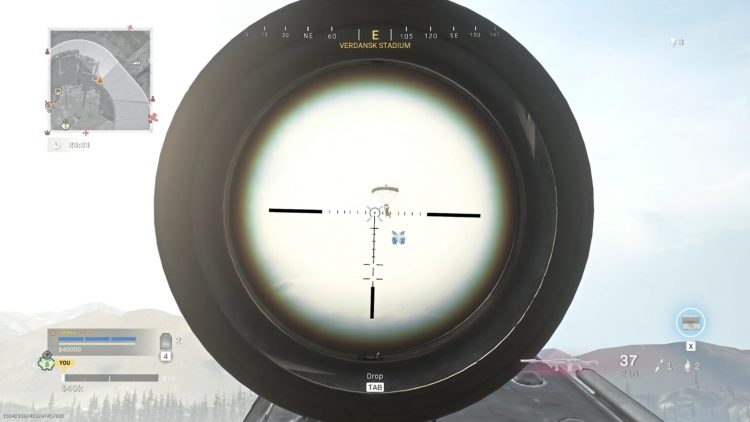 The Stoner 63’s effective range is seriously impressive. You can expect a good time to kill all the way out to around 250 meters assuming you land your shots.

As with most of the Black Ops Cold War weapons in Warzone, the Agency Suppressor is a must-use on the Stoner 63. Most of the recoil-reducing attachments are unnecessary as the Stoner’s recoil kicks directly up. The lack of left to right bounce makes it easy enough to predict and manage without too much difficulty. Most players will benefit more from the Agency Suppressor, which increases bullet velocity by 25% and keeps you off the radar whilst shooting.

Even though the Stoner 63’s recoil isn’t hard to predict, you may as well still run the Field Agent Grip. Frankly, until rear grips get fixed there just aren’t five great attachments worth using on this thing. You could argue that the SAS Combat Stock is decent, as it greatly increases your strafing speed while aiming. But all things considered, I value the slight improvement to recoil control over general mobility, as the Stoner 63 becomes a fast weapon even if you do use a stock.

As things are right now, the Stoner 63 is not quite top tier. Its slow weapon handling coupled with its numerous broken attachments hold it back from being something great. When stacked up against the more rounded Bruen and PKM, the Stoner 63 just isn’t Warzone‘s best LMG. And arguably it performs even worse when compared to the many laser beam assault rifles in Warzone. But not that much would have to change in order to see it become meta.

For starters, having the rear grips fixed would be a huge plus, as they provide the best aim down sights improvement of any attachment in Black Ops Cold War. Presuming that its stats carry over from the main game, it would become a must-use attachment on all Cold War‘s light machine guns. Equally, its Modern Warfare competitors have the VLK Rogue optic that reduces vertical recoil by 11%. The lack of an equivalent for Cold War weapons hurts the Stoner 63, as it does kick harder than a poorly built Bruen or PKM. Its recoil still isn’t that hard to handle, but there are some other guns that hardly recoil at all. Why bother using a more difficult weapon when there are others that are genuine laser beams? But keep an eye on the Stoner, as it’s only one buff away from becoming something special.