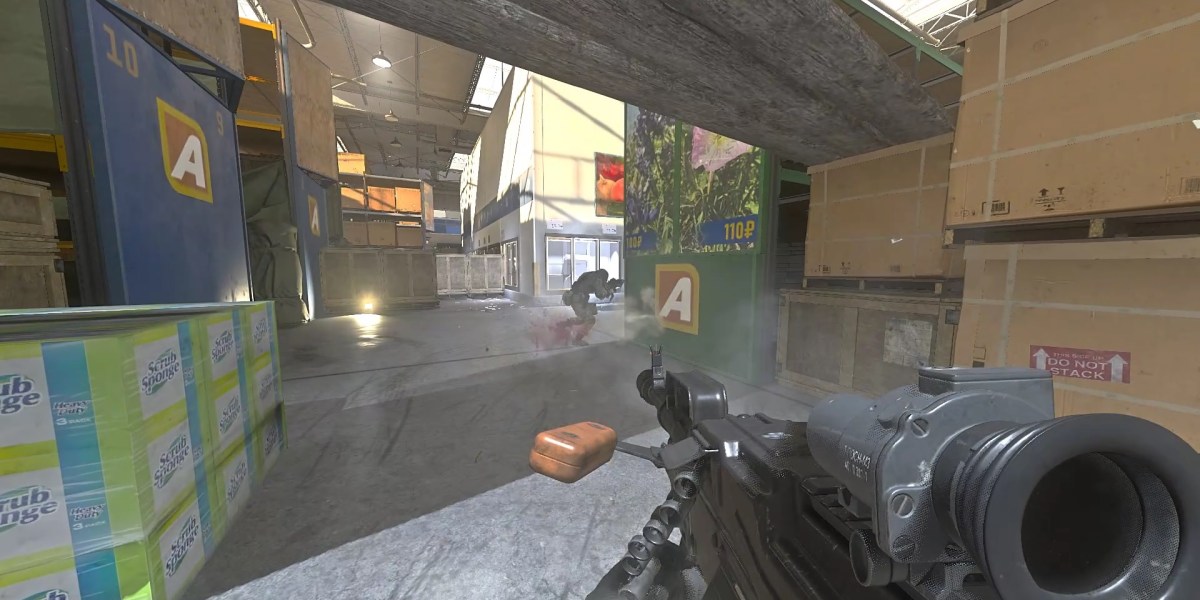 At last, the Bruen meta is over. For the last couple of months, the Bruen has been dominating Warzone. Thanks to its laser beam accuracy, impressive damage values, and surprising versatility, few could compete with it. With the recent nerfs, though, it isn’t looking so hot anymore.

The biggest change is that Infinity Ward opted to remove the Bruen’s upper torso multiplier. Previously, when shooting an enemy’s upper torso, you’d deal 34 damage per shot rather than the gun’s base 31. Also, its horizontal recoil was increased drastically, effectively ending its reign as the laser-beam LMG. If all that wasn’t enough, the developer also gave the meta 60 Round Magazine attachments a nasty recoil penalty, making it difficult to use at long range.

Now that your signature Bruen loadout has been ruined, you’re probably curious as to what is the new best-in-slot-primary. I’ve spent the last few days testing out different ideas, as well as noting down what the streamers and pros are using most. Here are the best guns to use in Warzone after the Bruen nerf.

If you’re looking for a direct replacement, there’s no better alternative than the PKM. Call of Duty: Warzone veterans are probably already familiar with this LMG — it has always been a popular choice. It has the exact same damage values as the pre-patch Bruen, but also comes equipped with more favorable damage falloff values. 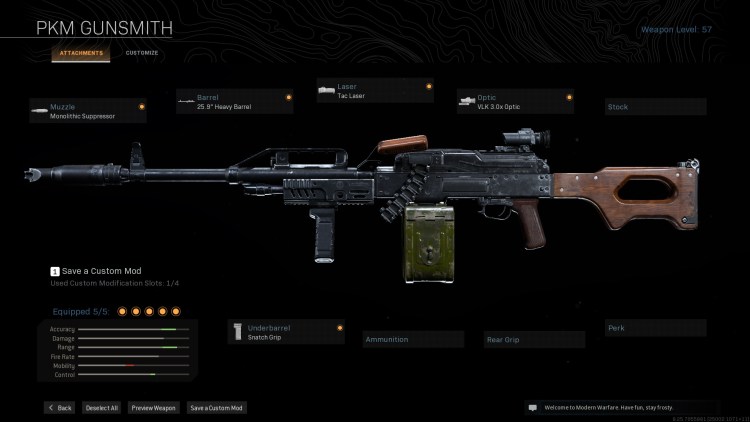 A very standard PKM build that shares an awful lot in common with its Bruen counterpart. You can drop the Monolithic for a Tactical Suppressor since the bullet velocity is fast regardless.

Contrary to what many may think, the PKM actually has better handling characteristics than the Bruen. When equipped with their respective meta attachments, the PKM has an aim-down-sight (ADS) time of 409 ms, while the Bruen comes in at 469 ms. A disadvantage the PKM has is that its bullet velocity is roughly 10% slower, making those long-range shots a little harder to hit consistently. Also, its awful reload time of almost nine seconds is going to get you killed sooner or later.

It feels as though regardless of meta, the M4A1 is always a viable option. Starting out life as Modern Warfare‘s best gun, the M4A1 has remained a strong choice in both multiplayer and Warzone since launch. This jack-of-all-trades assault rifle doesn’t necessarily specialize at anything, but its ability to compete in every category makes it incredibly versatile. 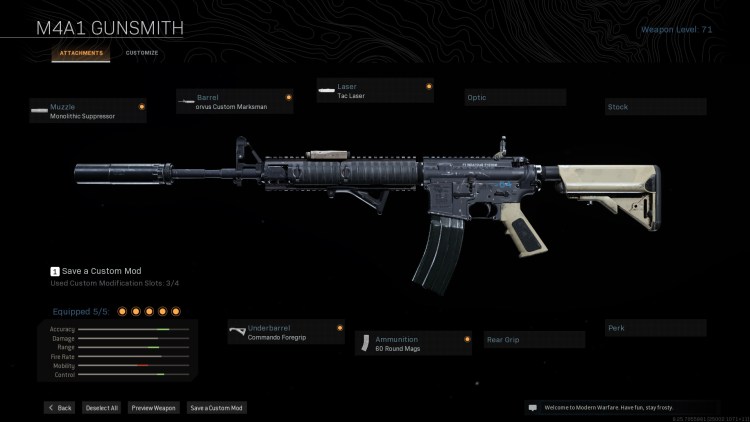 The M16 barrel gives better recoil control but worse gun handling. I value the handling more but feel free to switch them out if you want an easier to use build.

The meta M4A1 has an ADS time of 281 ms, above-average movement speed, favorable hip-fire spread, a large 60-round magazine, and one of the best fire rates in Warzone. It even has some of the game’s cleanest iron sights, saving you an attachment slot. This all adds up to create a primary that can easily adapt to all play styles, positions, and situations. If you want a gun that you can throw on without having to worry about Overkill or grabbing a second loadout, this is still your best option.

Warzone‘s newest gun has entered the stage and already managed to draw a crowd. With the frankly broken XRK LongShot Adverse barrel equipped, the FiNN out-damages the pre-nerf Bruen and the PKM. It’s an absolute beast at close to mid-range, outputting a staggering 1017 rounds-per-minute. That’s in sub-machine gun territory with only the Fennec having a faster fire rate in the entire game. 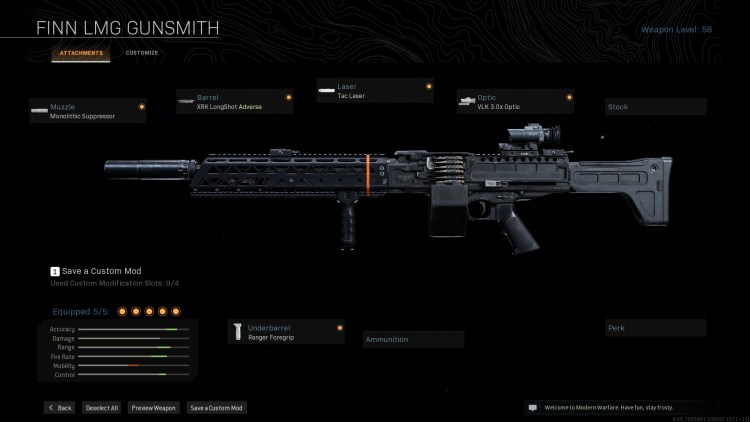 This is simply the build that will give you the best long-range capabilities. For a more versatile weapon consider dropping the Monolithic for a Tactical Suppressor and the VLK for a Holographic sight.

That insane fire rate does make hitting long-range shots a little more difficult, but the trade-off looks to be worthwhile. Equipped with any adverse barrel, the FiNN’s time to kill beats out every other fully automatic primary in the game up to 60 meters. At that point, the Bruen briefly takes the lead until 80 meters where the FiNN reclaims its title. At its max damage falloff range of 120 meters, the FiNN kills almost 200 ms faster than the Bruen. Assuming you can hit your shots, this thing is already looking to be one of the best guns in Warzone.

Previously, if you wanted a zero-recoil, laser-beam assault rifles, you’d opt for either the Grau or M13. The Grau received various nerfs dropping it out of the meta, while the M13’s lower damage profile makes it difficult to use at close range. This leads us to the Kilo 141, arguably the current best assault rifle in Warzone. 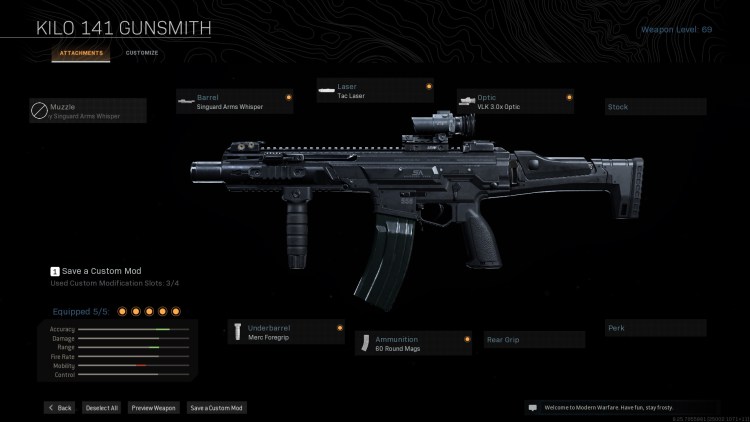 A fairly standard Kilo build however some may prefer to drop the optic for the Stippled Grip Tape instead. I’m just not a huge fan of the Kilo’s iron sights.

Much like the M13, the Kilo 141 produces next to no recoil when properly equipped. Given the Kilo’s decent damage profile, the fact that it still manages to be a laser beam is downright scary. In the current meta, there is no reason to use any other assault rifle assuming you are willing to use either Overkill or multiple loadouts. This is because despite its decent damage profile, at close range the Kilo is still outgunned by the meta SMGs. It’s inability to perform at all ranges makes it difficult to use without a suitable switch.

Speaking of switches, the best choice for your close-range rotation is still the MP5. This submachine gun has been both multiplayer and Warzone‘s best-in-slot since launch. Although Infinity Ward has given it a few nerfs, its general lack of notable weaknesses makes it the go-to for most high-skill players. 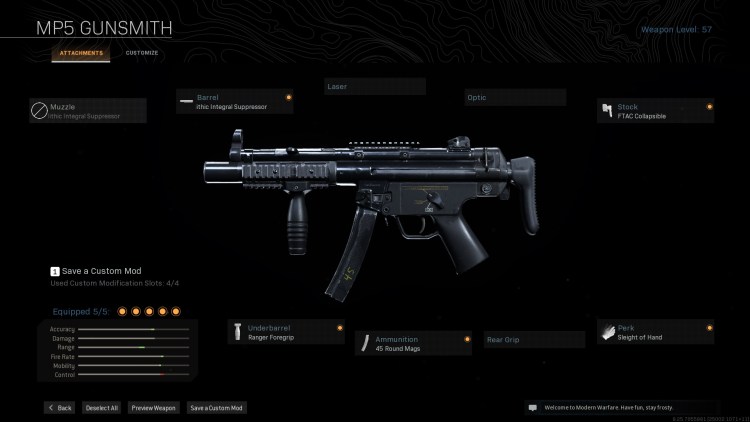 There’s little to no room for change here. The only worthwhile shout is that since the reload speed is already good you could drop Sleight of Hand for either an optic, 5mW laser, or Stippled Grip Tape.

Much like the M4A1, the MP5 is a jack-of-all-trades weapon with good handling, damage, and range. Unlike the M4A1, it has a best-in-slot time to kill, outperforming every other SMG. Meanwhile, it’s handling is only edged out by the P90, which has plenty of other problems preventing it from being meta.

If that’s not enough, the MP5 even comes equipped with an integral monolithic barrel saving and great iron sights, saving you two attachment slots. This is effectively a free Sleight of Hand and Stippled Grip Tape, further improving the SMG’s already great handling and reload speed.

For more Warzone tips and guides, be sure to hit up our guides and features hub.

By Alexa BeMent8 mins ago
Guides