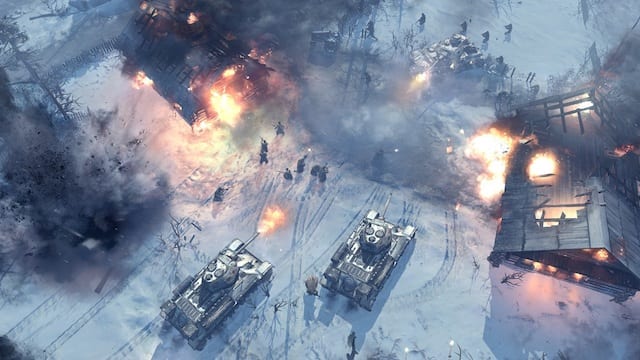 If you’ve been waiting to check out Company of Heroes 2 on the Steam front, consider this your golden opportunity. Today, Sega, alongside the developers at Relic Entertainment, announced that the game is free for a limited time. From Nov. 15 through Nov. 17, players will be able to download the game at no charge, and it’s theirs to keep on Steam as well.

Is there any catch?

There doesn’t appear to be any sort of catch. Once downloaded, the game is theirs for players to “keep forever,” according to the press release.

To coincide with this giveaway, Sega has also marked down several other releases in the franchise for a limited time. These include Company of Heroes and all its accompanying DLC and bundle packs. And those that don’t download the sequel this weekend for free can still get it next week for 75 percent off.

On top of that, Sega is also giving away a free Company of Heroes 2 “Victory at Stalingrad” bonus pack for anyone that signs up for the game’s official newsletter. It’s a quick and easy process, with the code sent shortly after confirming sign-up.

For those that missed out on the game when it first came out, here’s the lowdown: Company of Heroes 2 features a vast single player campaign that will take you through epic battles across Russia. As a Soviet commander for the Red Army, your job is to clean house on any invading enemies. Just make sure you watch out for brutal weather conditions and other dangerous elements.

Along with that, Company of Heroes 2 also features a multiplayer mode featuring two armies, the Red Army and the Wehrmacht Ostheer. Choose your side and prepare for battle.

Check out the trailer below and get into the epic action of Company of Heroes 2 on the house. Invite your friends, too!

Earlier this year, the developer successfully funded a Company of Heroes board game.

Path of Exile 2 revealed at ExileCon — watch out, Diablo