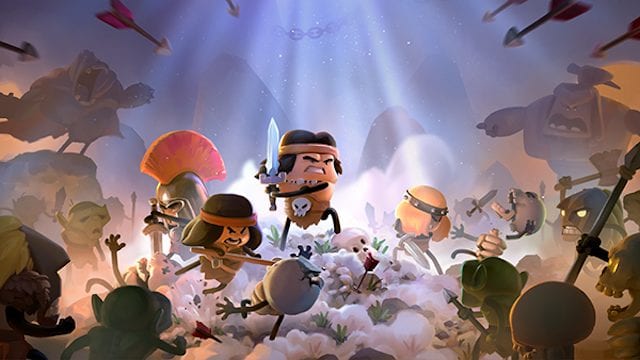 What started as an April Fools joke is about to become the co-op stuff of legend. Today, Mighty Kingdom and Funcom announced a release date for its upcoming game, Conan Chop Chop. The game is set to arrive on PC on February 25, 2020.

What the heck is Conan Chop Chop?

Originally announced on April 1 of this year (and perceived as a joke), Conan Chop Chop has picked up steam. The game is all about chopping down your foes chibi-style, with support for up to four players. It will even have online multiplayer. That means no one is safe from the chop!

Mighty Kingdom CEO Philip Mayes expressed praise for the steam the game has built up since its announcement. He talked about how fun it is developing the game, though “I actually have mixed feelings about the end being nigh.”

Mayes also has an excellent description for the game. He considers it “an action-adventure rogue-lite party-game. Featuring Conan.” And its tone is far, far different from the much more serious Conan Exiles, though fans should still love it.

Mayes continued, talking about the appreciation he gave the team for its effort. “It’s been hard work, but really enjoyable,” he explained. He “really looks forward” to how people will receive the game next year, silliness and all.

To commemorate the release date announcement, a new trailer also became available. It’s posted below and really provides a good idea of what Conan Chop Chop is all about. As expected, it’s chock full of choppiness. In fact, feel free to use that for your advertising, team. (Just make sure you get my last name right, okay?)

Though pre-orders on the Steam page haven’t opened up yet, the game is available for wish-listing if you’d like to take that route. Better get on it. Chop chop!