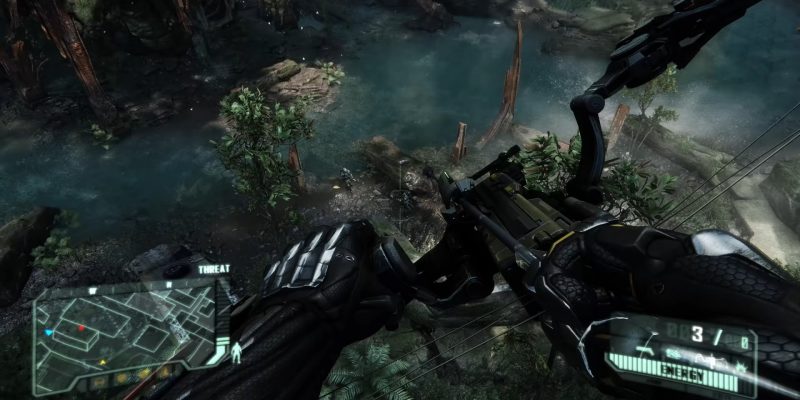 It appears Crysis Remastered was a success. Following teases of its sequels getting the remaster treatment, Crytek announced today that a Crysis Remastered Trilogy is on the way. Both Crysis 2 and Crysis 3 are getting remastered and will be bundled together with the first game in a nice, little package. Those who own the first remaster will be able to buy the other two games separately.

Crysis 2 and 3 Remastered should see the same upgrades as their predecessor. Crysis Remastered got massive visual updates around the board, including new lighting assets and 8K textures. It also had ray tracing support, giving the 2007 shooter real-time reflections on all its shiny surfaces. Several months down the line, it even got DLSS support, allowing some PCs to actually run the game. Well, mostly. Crysis Remastered does live up to its legacy, and it’s a damn demanding game no matter how beefy your rig is.

“We’re excited to announce that these iconic Crysis games are returning in one bundle, remastered for a new generation of hardware,” said Steffen Halbig, project lead, in the announcement. “Each game is  enhanced to look and play beautifully on today’s platforms, delivering the finest Crysis experience for both newcomers to our classic franchise or players wishing to relive the adventure.”

Can it run Crysis another two times?

The three games will be bundled later this fall in the Crysis Remastered Trilogy. It will include every game, but you can also buy them piecemeal if you wish. Crysis 2 swaps out the jungles of the original with a ruined New York City, tasking you with taking on hordes of invading aliens. The fight continued in Crysis 3, and this time it’s back to the jungle — in a way. New York is chocked with trees and vines, much like a rainforest. You return as Prophet, now armed with a bow for stealth. Because rifles are just too convenient.

The first game launched on the Epic Games Store exclusively. Crysis Remastered Trilogy will likely do the same.