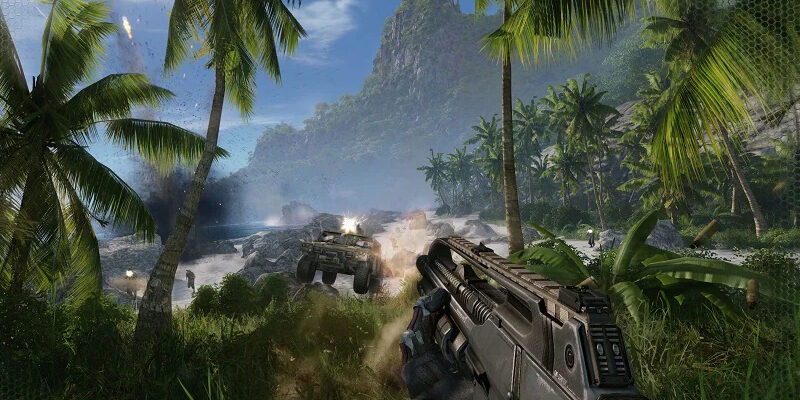 Developer Crytek has announced on Twitter that the upcoming Crysis Remastered Trilogy will be an Epic Games Store exclusive. It will launch on the Epic Games Store on October 15. Although it may come further down the line, there is currently no news regarding a Steam release. However, Steam users will be able to buy the first Crysis Remastered game, just not the complete trilogy.

The most likely reason for this is that the remaster of the first Crysis game was released in September 2020. Epic Games may have only paid for one year of exclusivity which will expire before the Crysis Remastered Trilogy releases. If this is true, the earliest PC gamers can expect the Crysis Remastered Trilogy to be sold on Steam is October 2022. Of course, none of this is comfirmed.

The Crysis Remastered Trilogy has become the latest in exclusive games to arrive on the Epic Games Store. The approach of buying exclusive rights to PC games isn’t the most popular amongst consumers, but it is done for a reason.

Steam has a dominant market share in the PC gaming digital distribution service industry. Catching up to Valve at this point is a near-impossible task, and so competitors are forced to come up with ways to at least close that gap. Using exclusives to tempt gamers to your platform is a practice that has been taken advantage of in the console space for some time. And now, PC gaming is joining in.

The suit changes all the rules.

Crysis Remastered 2 & 3 will also be available for purchase separately. pic.twitter.com/TbPqf8fxLS

A common criticism of the practice is that it is inherently anti-consumer. A free market should dictate that the best service will usually win out. If Steam is more attractive to users, then let it be. The other side of that, though, is that allowing a potential monopoly to form can be problematic.

Competition drives innovation. By acquiring desirable games like the Crysis Remastered Trilogy, Epic Games pushes Valve to improve in order to avoid losing users. It’s difficult to judge if this is good, or not, for the games industry. Regardless there’s one fact that’s certain. If you want to play the Crysis Remastered Trilogy this October, you’ll need to buy it on the Epic Games Store.

Super Animal Royale review — In and out, a 20-minute adventure

Pathfinder: Wrath of the Righteous — How to use custom portraits