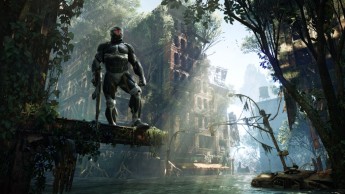 Crytek has shown off Crysis 3 at EA’s E3 conference.

Crytek’s Cevat Yerli was on hand to describe the team’s goals with the game, most notable being the use of “sandbox action”, which hopefully indicates a return to the more freeform combat of the first Crysis. There will apparently be seven types of areas, ranging from “high-rise canyons” to “deadly swamps” and “raging rivers”, to make up an “urban rainforest,” and the team want you to be able to “play them the way you want to.”

This was illustrated somewhat in the demo itself, which – while looking a bit linear, with moments in which the game certainly took control away from the player – certainly seemed to have a bit of freedom available, with the protagonist skipping stairs by leaping onto the tops of buildings and later leaping off them into the water below.

And yes, you’ve still got suit powers available, from cloaking through to armour (which may have been buffed a bit, judging by the amount of fire the protagonist took in the demo) but it’s the bow and arrow with its variety of ammo types that appeals mostly to me.

Become Need For Speed’s Most Wanted in October

Gears of War: Judgment: A prequel to the first game