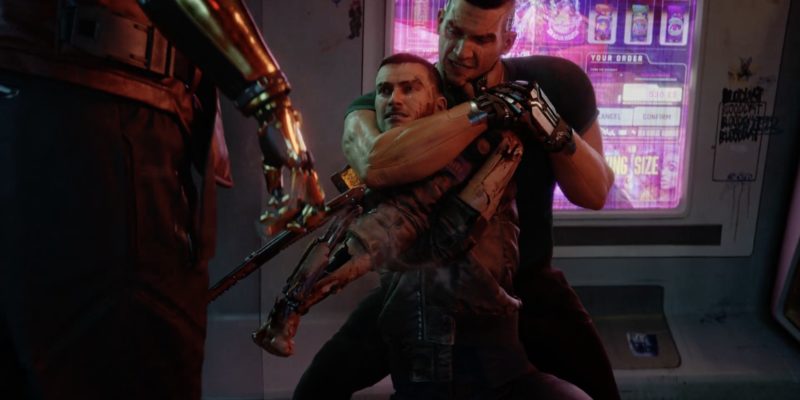 Cyberpunk 2077 has been in the news a bit in the last week. Surprisingly, for such an anticipated title, not all of it was good (such as the way they u-turned on crunch). However, one well-received piece of news from last week was the latest promo for the game that featured Keanu Reeves. Well, if you liked that one you’ll be interested to know that CD Projekt Red has released another. To be honest, I had to check it twice to be sure that it wasn’t the same trailer as before. Keanu Reeves is featured front and center again along with Billie Eilish providing the soundtrack. There’s even a lot of the same Cyberpunk 2077 game footage from last week’s trailer. It’s not all the same, though.

We get to see the cityscape of Night City, though I’m pretty sure this has been in other trailers. There’s some more fight scenes than last week’s trailer had. We also get to see that sweet yellow sportscar driving along the road before it gets trashed in the previous trailer. There’s also more footage showing V riding a train as well partaking in more social endeavors. Aside from that, it’s pretty much same as it was before. Even some of Keanu’s voiceover is recycled from last week’s trailer. Anyway, you can check out the latest Cyberpunk 2077 trailer for yourself below.

To be fair, CD Projekt Red probably wouldn’t be able to get away with this level of repetition in the trailer if we weren’t all so excited about Cyberpunk 2077. I know that I can’t wait to lose myself in Night City and enhance my character with an array of cybernetics. Fortunately, we don’t have that much longer to wait until the game releases.

Cyberpunk 2077 is scheduled to launch for PC on 19th November. There is also a Stadia version launching before the end of the year, if that’s your kind of thing.