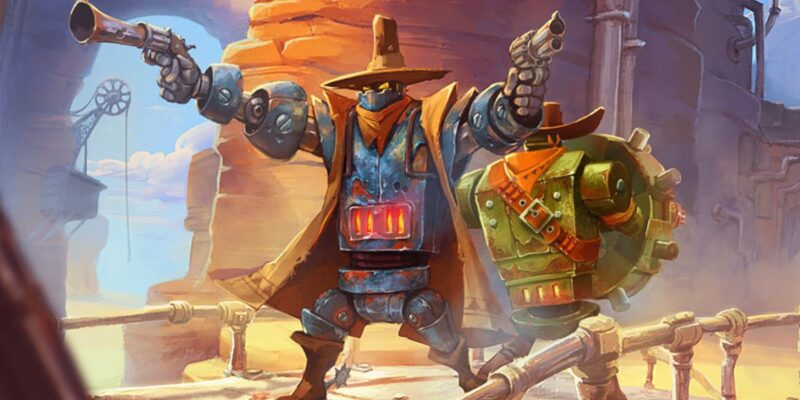 Up to this point, the SteamWorld games established themselves as strictly 2D titles. But SteamWorld Headhunter, the most recent entry that publisher Thunderful Games just revealed in its Thunderful World showcase, will enter the third dimension for the very first time. Thunderful only showed a brief teaser trailer for SteamWorld Headhunter, so players will have to wait a little longer before seeing any gameplay footage. Having said that, the trailer does manage to impress with its stylized, cartoony visuals, and it provides a brief idea regarding what the central gameplay element of SteamWorld Headhunter will look like.

The trailer kicks off with a typical Wild West showdown between a robot with a wild rag and a cowboy hat and another robot with a bowtie and an Uncle Sam-esque hat. The cowboy robot manages to land the first shot, but when he goes to inspect the body of his opponent, he finds that the head has gone mysteriously missing. Soon enough, the cowboy robot turns around and the camera cuts to the head of the Uncle Sam robot, now donning legs, lunging at him. This suggests that sending heads toward enemies serves as the game’s main gameplay feature.

A fresh take on the series

According to Thunderful, SteamWorld Headhunter functions as “a stylised and colourful, third-person co-op action adventure with a head-popping twist.” Although the game “maintain[s] the style and charm that’s helped make SteamWorld such a beloved franchise, this move into 3D represents a brand new approach to the series.” In regards to the story, Thunderful only shared that SteamWorld Headhunter “directly follows the (literally) earth-shattering events of SteamWorld Dig 2.”

It will likely take quite some time for Thunderful to announce a release window for SteamWorld Headhunter, but the trailer nonetheless has plenty for fans to appreciate despite its brevity. Fans can look out for more updates on Thunderful’s website and Twitter account.

Jurassic World Evolution 2: How to get the Mosasaurus

Jurassic World Evolution 2: How to enclose the Allosaurus in the Campaign