As the resident Destiny expert of the team, I thought it would be a good idea to check out some of the game’s exclusive items or end-game rewards. The most recent one comes from the Festival of the Lost event, which is essentially Halloween for Destiny 2: Forsaken. Its top prize? The Horror Story auto rifle, which you can obtain by spending 120 Fragmented Souls.

In our Festival of the Lost event guide, we mentioned how you can obtain and farm these materials. If you’re one of those players still on the fence whether the Horror Story is worth all of that effort or not, I’ll go ahead and answer that question for you.

Short answer: It is. 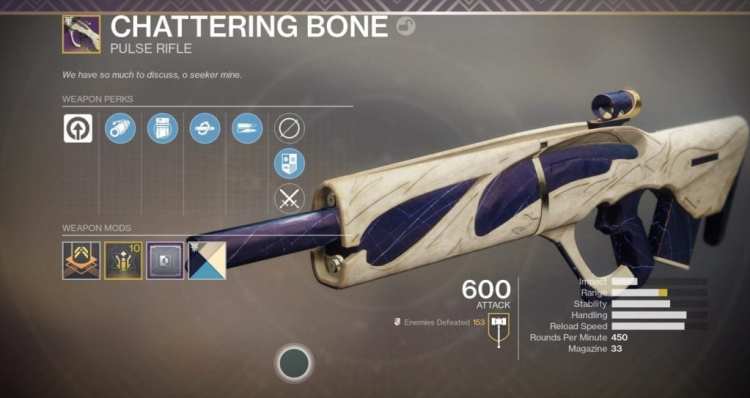 The Curated/God-Roll Chattering Bone: My previous primary weapon which was recently replaced by the Horror Story.

There are numerous reasons why you should pick it up. First and foremost, you might still need it for the extra power level (PL) boost. As many long-time Destiny players know, even though the game has an avid “core gamer” community, the majority of its player base is fairly casual. Only a handful of Guardians tend to complete raids, let alone attain the pinnacle of progression. This means that many players are still way behind in terms of PL.

The Horror Story is a 600 PL auto rifle that goes into the primary weapon slot. If you need something for that slot, you’ve got it covered with this weapon. Additionally, the Horror Story is a requirement for a triumph in Destiny 2: Forsaken. Given that the Festival of the Lost is a limited-time event, you’ll definitely want to grab it just to complete the triumph before the event ends on November 6.

Another reason why you’d want it is if you’re an auto rifle aficionado like myself. I’ve been an auto rifle user since Destiny 1. Although I occasionally dabbled in pulse rifles when I obtained a god-rolled Hawksaw or Grasp of Malok, I tend to feel more comfortable with ARs in general. So yes, if you need an AR for your primary, this one is a good replacement for your old BrayTech Winter Wolf or Origin Story.

Note: My previous primary weapon was a curated/god-roll Chattering Bone pulse rifle from the Last Wish raid. I’ve now replaced that with the Horror Story since, at this moment in Destiny 2, you’re not going to be able to make me equip a pulse rifle unless it’s full auto and fires like a laser or it’s the Graviton Lance. Sadly, god-rolled Bygones and Go Figures have always eluded me.

There is, however, a major issue with the Horror Story. It’s that, in general, auto rifles haven’t been part of the competitive meta since the days of Uriel’s Gift and Positive Outlook. Those days are long gone, replaced by the Ikelos Shotgun, Graviton Lances (yes, it’s still a thing), the aforementioned Bygones/Go Figure godly rolls, and Sleeper Simulant (for Gambit, at least).

The Horror Story isn’t in the running for the “must-have Destiny 2: Forsaken weapon to dominate in the Crucible” award. That means it is going to gather dust in your vault if you’re primarily a PvP player. I did take it out for a spin in the Iron Banner the previous week and racked up a few kills, though I should note that I was with a stacked fireteam. Still, you can get decent use out of it, such as in that video above from YouTube user Nexas.

For PvE, as mentioned, I preferred using a BrayTech Winter Wolf during Warmind prior to switching to the Chattering Bone in Forsaken. The Horror Story just felt like a natural fit given how much I’ve fancied auto rifles since Vanilla Destiny 1. Since it was fully masterworked, multi-kills granted extra orbs for teammates, which helped in activities. Do note that it’s not as ideal, damage-wise, compared to a Midnight Coup or Better Devils (hand-cannons which a lot of players seem to love).

It’s not going to be a godsend in Crucible, but you’ll want to farm for the Horror Story in any case for the power level boost and the completion of your triumphs. Likewise, it just feels good to be thrifty by getting a fully-masterworked item without needing to spend your cores. With the Horror Story as part of your collection, all you’ll need to do is wait until the 30th when we chase down the killer of Master Ives and find out just what that “classified” reward is.

If you’re looking for another detailed breakdown of the Horror Story, check out the video above from YouTube user and Destiny 2: Forsaken player CbGray.

Twitch And Harmonix Team Up For “Twitch Sings” Karaoke Game