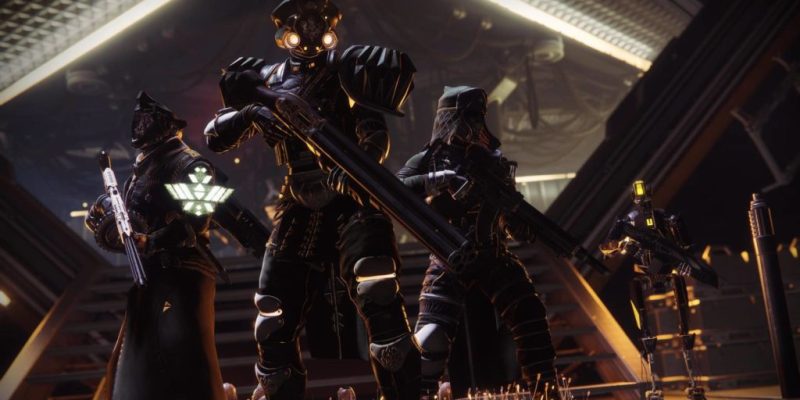 Another quarter, another season of Destiny 2 content drops. This time around, we’ll start the Season of the Worthy. Guardians will need to help out Zavala and Ana Bray, all while powering up the Warmind Rasputin via Seraph Towers and Seraph Bunkers. A new Nightfall difficulty — Grandmaster — is also being introduced for those who want to obtain pinnacle rewards. Oh, and Trials of Osiris will return, but we won’t see it go live until this Friday. So, is Destiny 2: Season of the Worthy actually worth your while? Let’s delve into our official review.

Destiny 2: Season of the Worthy – The story so far

We’re starting things from where we left off in Destiny 2: Season of Dawn. Osiris needed our help to activate Obelisks and stop the Cabal. We did just that, but there’s another looming threat. In Season of the Worthy, this comes in the form of Cabal survivors. You’ll find out from Zavala and Ana Bray that these Red Legion remnants have done the unthinkable. They’ve set the Almighty (Dominus Ghaul’s flagship from Destiny 2‘s vanilla campaign) on a collision course straight for the Tower.

Obviously, this cataclysm needs to be stopped. That’s where Rasputin comes in. The AI defense network played a pivotal role during the Warmind DLC, and it’s back in Season of the Worthy. Of course, if you’ve played any Destiny 1 or Destiny 2 add-on before, you’ll know that Bungie tends to dangle some bits and pieces of lore only to leave some plot holes unresolved. It turns into a never-ending cycle of a threadbare narrative followed by content drip-feeding for three months. 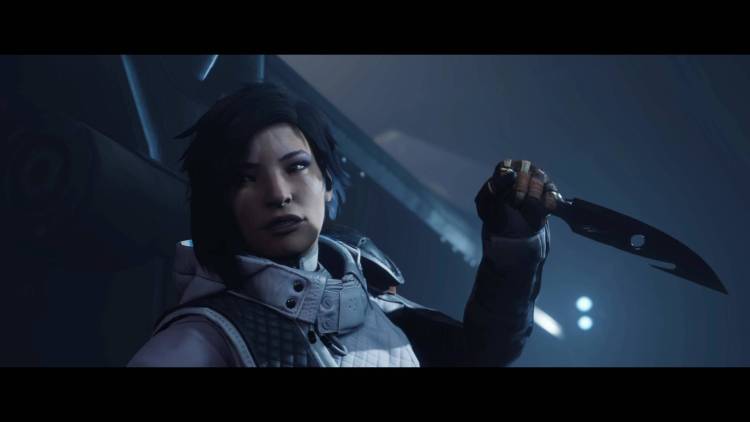 In any case, you’re given a couple of tasks — i.e., the very original “collect/generate orbs of light” — before you could access Rasputin’s lair. From there, you’ll head to the EDZ to unlock the Seraph Bunker. After a very short mission, you’ll be able to interact with Rasputin’s network which takes you to a wonderful new world space that’s only rivaled by the Dreaming City.

I’m kidding. It’s just a vendor that has bounties and upgrades. 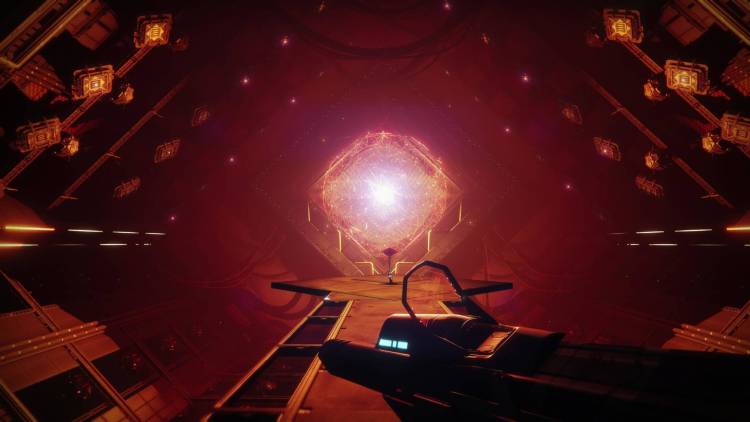 So, how exactly do you unlock more upgrades and level up your Rasputin “faction/vendor” rank? Well, you’ll need to do the Seraph Tower public events. You’ll find this in specific zones in the EDZ, the Moon, and Io. Think of this event as similar to Escalation Protocol in that anyone can start them. Unlike Escalation Protocol, however, the event is quite bland and boring.

Your objective here is to kill mobs until support towers shoot out silver orbs. Then, you throw these at a (different) flaming red orb, pushing the flaming orb towards the main tower. You’ll keep redoing these steps until you reach 100%. Ah, and once you do that, you’ll find yourself in a radiolarian lake…

I’m also kidding. What you’ll instead see are a couple of champion mobs; you kill them and open the chest for “two tokens and a blue.” 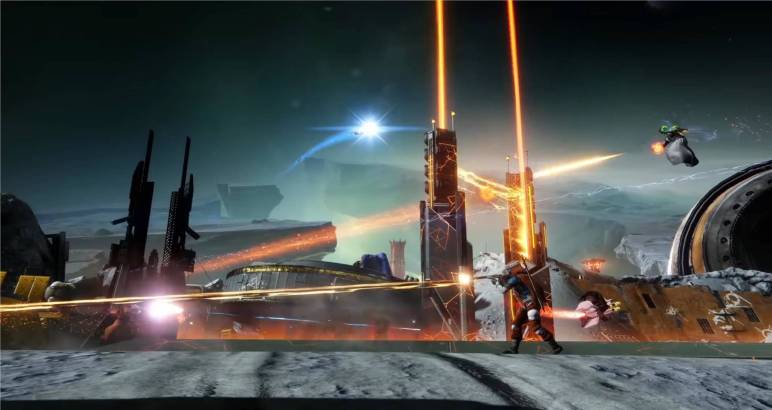 Yes, inside the chest are some “Warmind Bits.” This new currency is used to purchase Seraph Bunker upgrades. You purchase an upgrade, and you get a chipset. It’s like a token that you turn in to gain “bunker rep.” Lather, rinse, and repeat until you’ve leveled up the Seraph Bunkers.

Yes, Guardians, it’s going to be another grind. Unlike the Season of Dawn’s Sundial and Obelisks or activities in previous Destiny 2 DLCs, this will mostly take place in a couple of zones with tiresome event mechanics. You’ll farm currencies over and over, making your way through slogs like legendary lost sectors, all while doing Rasputin’s bounties such as “kill Taken majors or defeat Guardians with fusion rifles.” An entire season with a gameplay loop based on bounties and token turn-ins. Does that sound exciting? 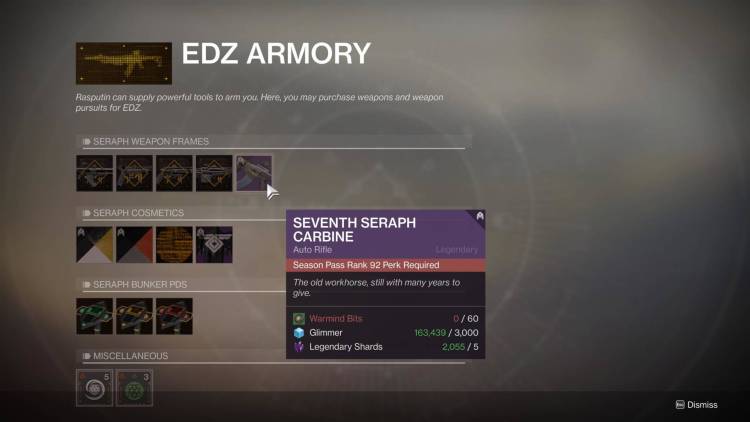 Another problem that presents itself is that the activities become too accessible to a fault. Seraph Towers, since they occur in a patrol area, are available to all Destiny 2 players. Consider the fact that you can end up in a zone with various randoms — or a blueberry who’s shocked when a million deaths aren’t enough for Master Rahool — there’s no telling if someone’s there to help or hinder you. I actually had to type instructions several times via local chat. That was futile since players aren’t automatically opted-in to join the chatroom. The opposite can also happen, such as when I tried to check out the Moon and, much like what happened during Shadowkeep‘s Vex Invasion events, there was no one there.

It would’ve been better if this activity had matchmaking as you’re in orbit (kind of like the Menagerie or the Sundial). That would improve planning out farming groups with friends rather than the old Escalation Protocol method of “hoping someone’s there” or that “someone knows what they’re doing” so you and others can progress. 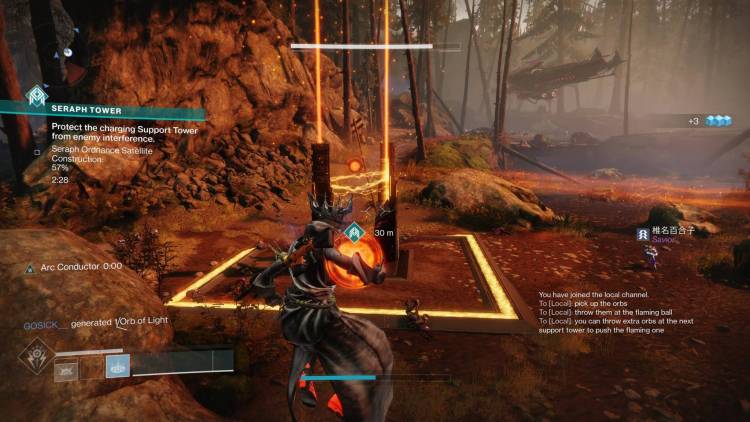 As for armor mods, some of your existing armor sets can now have Season of the Undying and Season of Dawn mods, which is a nice change. Sadly, your Season of the Worthy armor can only have Worthy and Dawn mod types. There are also certain armor sets that have been added to the loot pool, but they can’t have any seasonal mod whatsoever. It’s like Bungie tried to slap on a QOL improvement without going all the way. 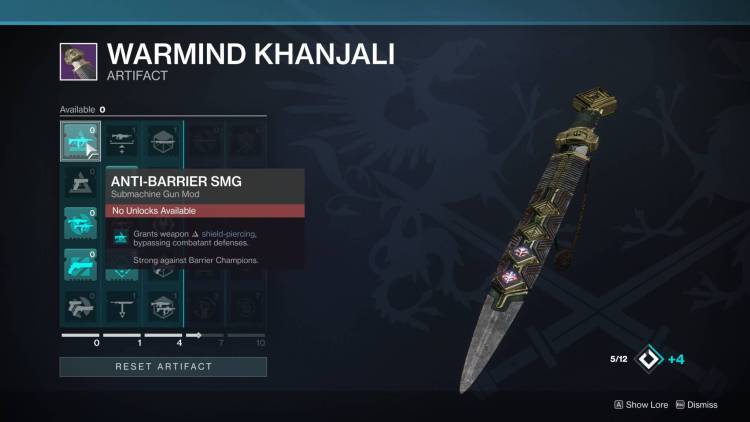 If you want to know how the rest of the PvE aspect would play out, just scroll up because that’s all there is to it. Destiny 2: Season of the Worthy, as far as we know, has no new strikes or a raid. Pinnacle rewards progression has hardly changed, so you’ll still be running Pit of Heresy and Garden of Salvation like you’ve done since October 2019. The Grandmaster Nightfall difficulty, which leads to a seal/title, won’t be out until late April.

Regarding exotics and nifty weapons, datamined information shows that everything in Season of the Worthy has been announced already, so it’s hard to expect some surprises. Likewise, a community manager has also revealed that there’s only one ritual/pinnacle weapon, and it’s only available from Iron Banner (which isn’t live this week). If you’re also keen on tracking your old progress, the emblems have been reworked so you can choose specific stats to showcase. Unfortunately, a lot of player stats have been wiped.

Season of the Worthy contains a single ritual weapon, reserved for the Iron Banner.

You'll learn more about this reward before the first Iron Banner of the season.

The PvE aspect is already a downer. Still, maybe the highly-touted and hotly-anticipated PvP activity can keep players interested? That’s because Trials of Osiris, the competitive 3-on-3 PvP mode makes its return in Destiny 2: Season of the Worthy. Previously, we were told that artifact power level bonuses would be disabled to create a more balanced atmosphere. Unfortunately, Bungie have also admitted that the fix won’t be applied until next week’s cycle.

In any case, Trials of Osiris is considered “serious and sweaty.” If you’re the type of player who’s not too keen on focusing on PvP (which is, probably, half the Destiny 2 population), then your best bet is to try to enjoy the new PvE content. If that PvE content doesn’t sound appealing, then Destiny 2: Season of the Worthy won’t pique your interest in the long run.

Concerning the activity itself, there are some changes worth noting. For instance, players no longer use Trials boons. Instead, you purchase a Trials passage from Saint-14 beforehand. The Passage of Mercy forgives one loss while the Passage of Ferocity nets you an extra win after you’ve obtained a 3-0 score. Additional passages can be unlocked depending on your progress and skill, and these have different effects as well. Saint-14 also offers Trials bounties that give you tokens, and the bounties themselves can be silly since they require kills using specific weapon types or elements. 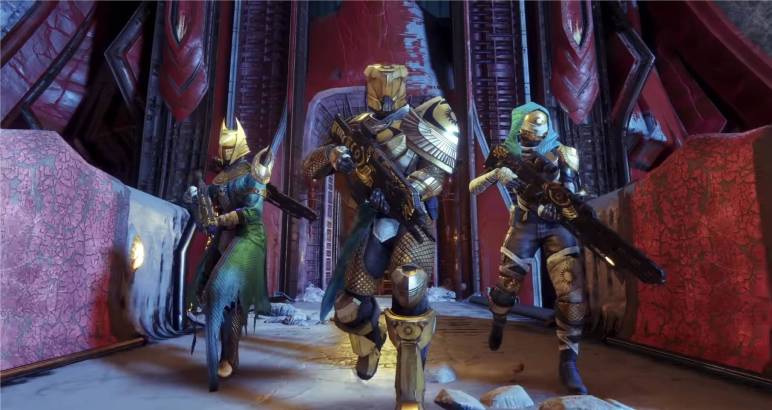 Flabbergasting flaws to get Flawless

In Trials of Osiris, the main goal is to reach “Flawless,” a 7-0 score so you can head to a special area in the Lighthouse and claim your rewards. Of course, you can also experience the following:

It seems connection-based matchmaking (CBMM) is enabled, but power level differences are ignored which can lead to lopsided matchups. Ideally, you’ll want to wait until next week for the artifact power gains to be disabled so everyone can be on a level playing field. Then again, this simply means that those who already have an advantage this week will still retain that advantage next week (due to powerful and pinnacle drops from the activity itself).

To top it all off, one of the tickets (Passage of Confidence) requires that you complete one Flawless run beforehand, and the ticket itself promises additional rewards from the Lighthouse chest. Unfortunately, these were also non-powerful drops with no duplicate protection. Considering how Trials of Osiris is the “sweaty” and somewhat stressful PvP mode, all the above just lead to more frustrations or tediousness in addition to Destiny 2: Season of the Worthy‘s mediocre PvE content. 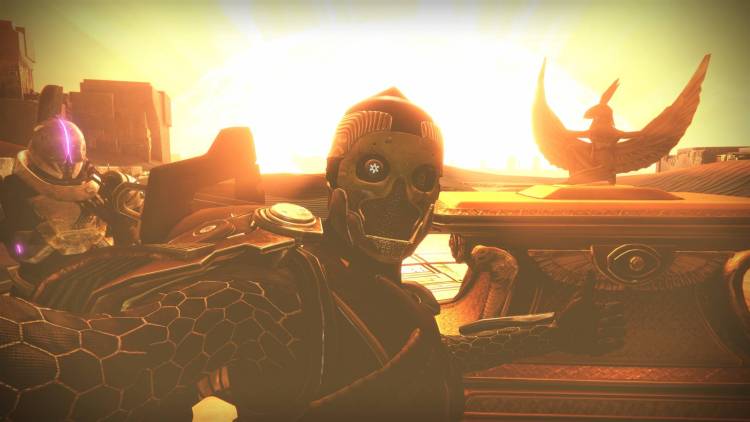 Destiny 2: Season of the Worthy review – The final verdict

Had we been discussing only the pricing point, then most Destiny 2 add-ons provide more bang for your buck. Each season costs $10 and lasts three months; that’s $3.33 per month. Unfortunately, that’s not the only factor players should consider. One needs to also look at the overall quality, presentation, engagement, original content, and fun factor. These are sorely lacking in Season of the Worthy, making it one of the most disappointing Destiny 2 DLCs thus far.

Questionable decisions abound, from only having one ritual weapon and an emblem system that’s mind-boggling, to the inclusion of older armor sets that can’t even use seasonal mods. We also need to take note of ridiculous power level spikes that primarily benefit those who love farming exp and bounties, especially considering how Destiny 2 has become too reliant on those systems. In the same vein, Trials will only attract the most hardcore and elite of PvP players. Hinging a DLC’s hype and success on this potentially alienates a vast majority of the player base.

Even though it’s only the first week, the season calendar itself makes little mention of anything else you could look forward to. Without a doubt, Destiny 2: Season of the Worthy is the opposite of its own namesake. 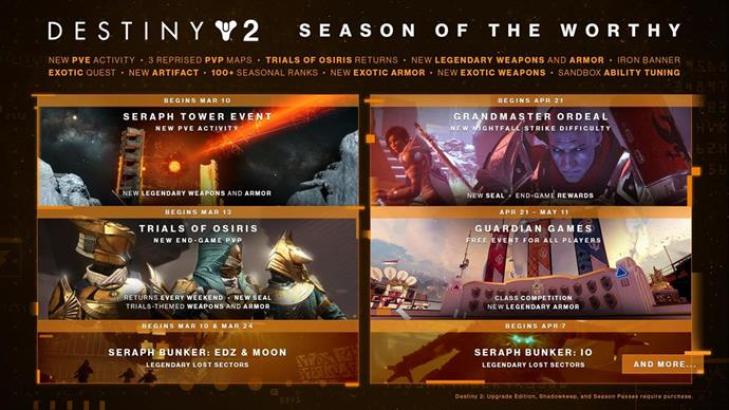 Destiny 2: Season of the Worthy

The next Destiny 2 season where Guardians ask for Rasputin's help. New activities include Seraph Towers and Seraph Bunkers, and Trials of Osiris makes its return.
4

Destiny 2: Season of the Worthy hardly adds anything of note, Trials of Osiris notwithstanding. With a grind and gameplay loop that has become far too reliant on turning in bounties and tokens and content that doesn't keep you engaged, Season of the Worthy isn't worth your next three months

Starborne, the MMORTS, warps into open beta on April 2