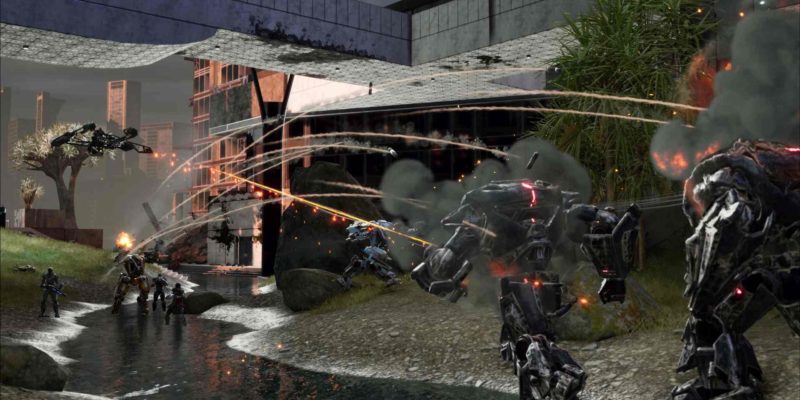 It took V1 Interactive’s president and creative director Marcus Lehto almost six years to write the story for Disintegration. As one might expect from the co-creator of the Halo series, the campaign will be a sci-fi epic with a deep backstory. Building on what he revealed about Disintegration’s story campaign last October, Lehto lays out a futuristic world of flying grav cycles, all-too-human robots, and organic humans struggling to survive.

Disintegration takes place about 150 years in the future, and humanity stands at the brink of annihilation. Climate change, food shortages, and other catastrophic events led a large portion of the world’s population to shed their skin and have their brains integrated into robotic bodies. Known as the Integrated, these people look like robots, but many retain human traits such as wearing clothes and certain mannerisms.

“We have a set of characters who are all very human in their own right,” Lehto said as he explained the backstory.

A subset of the Integrated became a bit overzealous while embracing their post-human reality and went to war with those who hoped to one day regain their organic bodies. That global war, which still rages, pretty much tore the what remained of the world apart. That’s where the player enters the picture as Romer, the head of a loose-knit group of Integrated outlaws who are protecting natural humans from a militaristic division called the Rayonne. 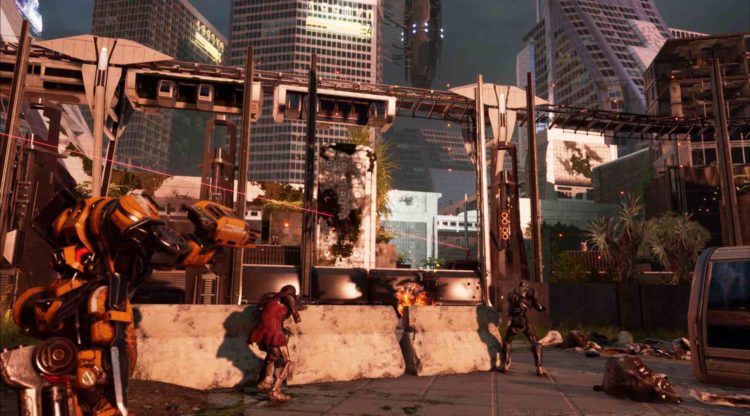 Although the Integrated Civil War is mostly over in North America, it’s still being waged in other parts of the world.

Romer vs. the Rayonne

There are a lot of advantages to being Integrated. Being in a robotic body makes you stronger, faster, and tougher. You also live an extended lifespan of hundreds of years, and some have gotten rid of human bodies altogether in favor of bigger and more menacing forms.

“That’s what (the Integrated) love about being robots — even Romer himself,” Lehto explained. “Their bodies can be blown up and they can be reintegrated with a new robotic armature as long as the heavily armored brain container is secure.”

But the one thing that mechanical bodies can’t do is reproduce. After a long ongoing war, the Rayonne is eager to replenish its ranks by capturing as many natural humans as it can and forcibly integrate them, stripping them of their humanity in the process. 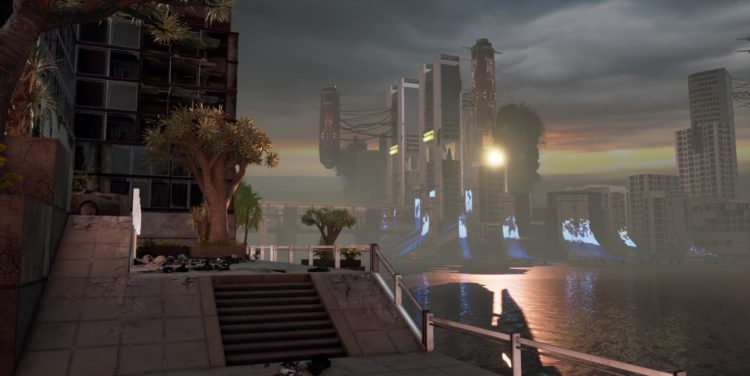 Heading the Rayonne forces is the character Black Shuck, who is named after a legendary ghost dog from English folklore that is sometimes regarded as an omen of death. Black Shuck has fallen out of grace among the rest of Rayonne leadership and has been tasked with mopping up the remainder of outlaws in North America, where the war has all but ended. Stationed aboard a massive capital ship called the Iron Cloud, Shuck hunts down both natural humans and the pockets of integrated resistors who have managed to hold on to their free will in an effort to get back into the Rayonne’s good graces.

Meanwhile, Romer was once a famous grav cycle pilot and host on a Top Gear-like television show. He became Integrated to help boost the show’s ratings, but everything fell apart once the war started. Romer ended up stealing grav cycles for Black Shuck and the Rayonne to get by, but later he decided to throw his support behind the natural humans. After escaping Black Shuck’s forces, Romer meets and befriends both natural humans and like-minded Integrated who join his crew of rebels. 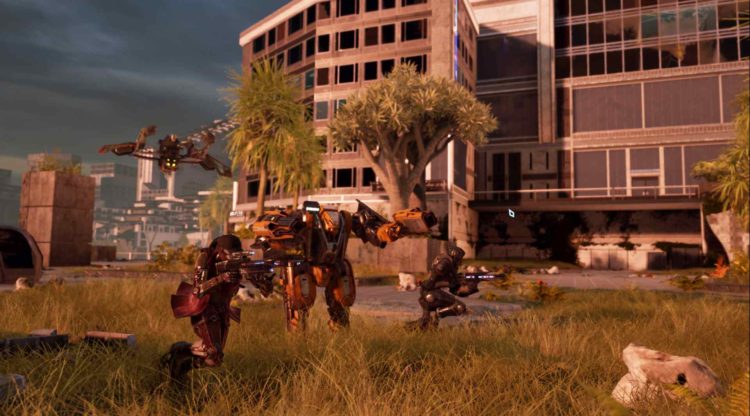 You’ll come to rely heavily on your crew of Integrated troops.

This is where the story cleverly mixes in the game’s unique gameplay, where players command a group of ground troops while flying around in a weaponized grav cycle. Although those ground units might have come off as robotic drones in the Disintegration multiplayer preview, they’re actually Integrated characters that players will interact with during the campaign.

According to Lehto, you’re “always in a symbiotic relationship with ground units because they’re your team.”

As demonstrated in a mid-game mission, some Rayonne-controlled areas have jamming towers that disable grav cycle weapons. You’ll need to maneuver your ground forces to destroy the jammers before you can progress. Your troops, armed with different weapons and mechanized suits, become your crew and a kind of extension of yourself.

Surviving the world of Disintegration

While you may come to rely heavily on your ground troops, you’ll never become one. Although players can walk around, interact with NPCs, and purchase upgrades in the world hub, Romer always drives a grav cycle while on a mission.

“It’s important to recognize the fact that Disintegration is all about this idea of commanding ground units from a grav cycle in the sky,” said Lehto. “That is the core of our game, and that’s what we wanted to latch onto, make true, and make as polished as possible without straying too far off course.”

During the campaign, players are assigned grav cycles with preset loadouts and ground troops. You might have a small contingent of troops and a light grav cycle or some different combination. Upgrade chips can be found in the world, and they improve Romer’s abilities with skills such as faster health regeneration, shorter reload times, and more armor.

Lehto explained that preset loadouts came along with some of the design decisions V1 Interactive had to make when crafting the player experience across the entire overarching story.

“We wanted to make sure we crafted an experience in a way that allows the player to get a deep sense of all the different gameplay mechanics using all the different kinds of grav cycles and weapons,” he said. “As well as getting to know and appreciate the different characters.” 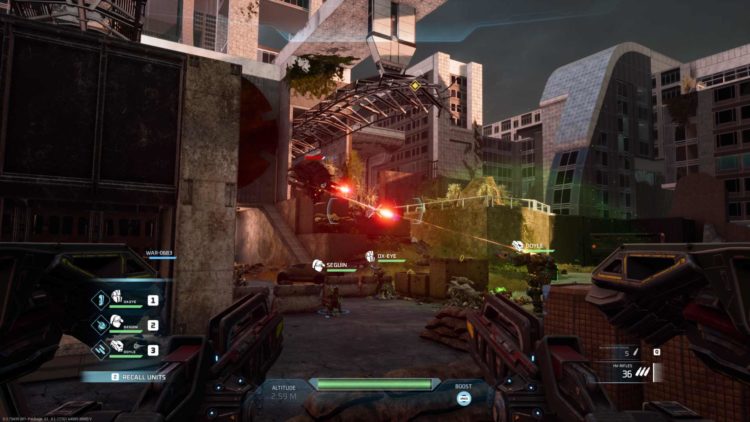 Take command and rain down destruction from your grav cycle.

Many of the abilities and weapons players will find in the eight-to-10-hour campaign parallel what’s found in multiplayer. But there are also a variety of characters and enemy weapons that are specific to the story. One is the Watcher, which actively scans for rebel activity and will call in reinforcements if you don’t destroy it fast enough.

Lehto describes Disintegration’s multiplayer as being a frenetic and fluid action experience. In comparison, players can take the campaign at their own pace and approach different combat zones with a kind of thoughtful strategy that multiplayer doesn’t give time for. The campaign mode also slows down time when you execute ground troop abilities, which allows players to pull off complex maneuvers. Players also have the option to turn on a scan mode and see through walls in the environment in search of salvage and upgrade chips.

The future of humanity

For many players, the big question is whether an end goal really exists for Romer and his fellow outlaws, or if they’re just chasing the dream of returning to biological bodies.

“That’s the core of the story,” said Lehto. “It’s that carrot hanging out there and the reason that the outlaws are fighting alongside other humans. They want to save what’s left of humanity and ultimately become reintegrated with a clone of their human bodies. They’ve been told that the technology exists, but finding out for sure is part of the story.”

Disintegration is expected to launch later this year.

Valorant defies the limits on closed beta day one

By Andrew Farrell49 mins ago
Previews

By Martynas Klimas17 hours ago
Previews

By A.K Rahming22 hours ago
Previews

By Jason Rodriguez6 days ago
Interviews