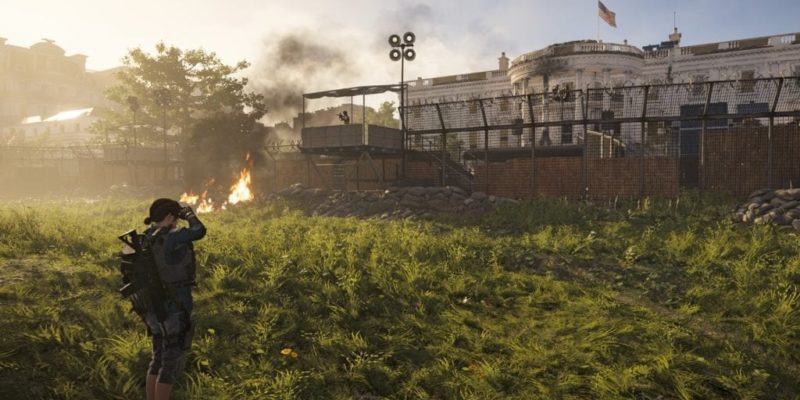 Like a number of shooting game aficionados out there, I gave Tom Clancy’s The Division a try when it originally launched in 2016. However, I also ended up disappointed within the first couple of months. The game had limited customization options and a uninteresting endgame loop. Likewise, PvP in the Dark Zone was a mess, and I ended up repeating the same PvE missions and Incursions, glitches and all. Credit goes to Massive Entertainment who, according to those who’ve stuck with the game, managed to turn things around. So, that brings us to today with The Division 2’s private beta made available for those who’ve pre-ordered or were provided access.

I came in with an open mind hoping to see what’s in store for Ubisoft’s shared-world shooter. I came out wondering if “District of Columbia” should instead be changed to “Disconnect.” That’s due to a number of issues amplified by rampant disconnections during the game. To be fair, this is a beta, which is meant to identify problems ahead of time. The servers were likely experiencing heavy volume. Maintenance is also scheduled for today which, hopefully, fixes these issues.

Update: The recent server maintenance has fixed Delta-03 issues. Today would be a great time to check out the private beta once more to continue your progress. 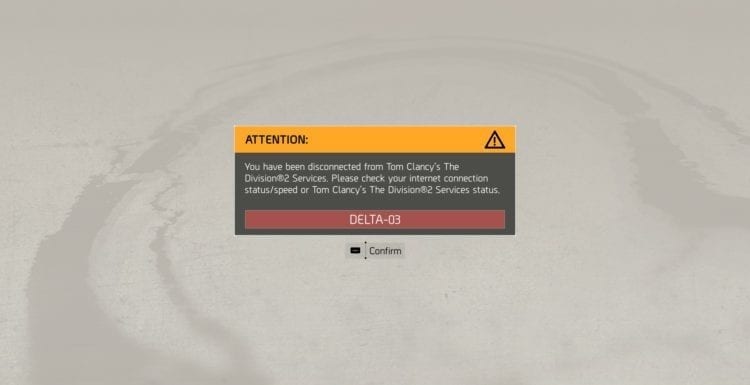 Character customization is randomized only for the purposes of The Division 2’s beta. I then checked out the happenings in Washington, D.C. since the Dollar Virus led to the collapse of the United States. I genuinely found the scenery breathtaking. Keep in mind, I played the first game on my PlayStation 4 and so this is the first time I was playing on PCs. I was immediately wowed by the visual detail from ruined buildings to abandoned cars, and even the animals that were scampering around.

Given that I was playing on a 1080p TV, I was able to set the graphics settings to ultra. I encountered no graphical issues — no screen tearing, stuttering, or slowdowns. With V-Sync turned off, the game was running at a healthy 80-100 FPS. I’ve no qualms with the visuals at all. But take note that due to disconnections, I was only able to play on and off. Some users have reported heavy frame-rate drops when playing long periods. 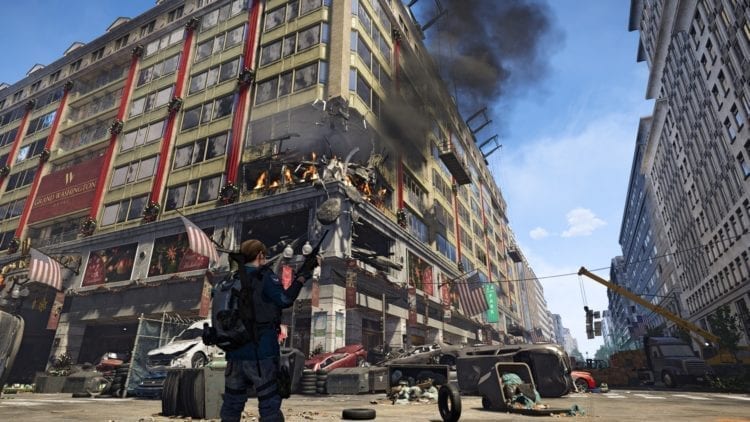 Even during the beta, The Division 2’s visuals were superb. I experienced no performance drops on Ultra settings (1080p, i7-7700k, 16GB RAM, GTX 1070 Ti) — though that might be because I haven’t had a lengthier, uninterrupted play session.

That’s when I decided to use Photo Mode, which I was surprised to find in The Division 2 beta. If you’ve checked out some of our previous Assassin’s Creed Odyssey coverage, then you know I’m a big fan of Photo Mode.

The moment I paused the game to take a picture, I immediately realized that we’re going to have a problem. That’s because Assassin’s Creed Odyssey is a pausable single-player game. Meanwhile, The Division 2 is always-online, and the action doesn’t stop when you’re on your menu. That meant saying goodbye to dynamic screenshots filled with intense action. All that’s left is just taking an image of the landscape with a plain emote. 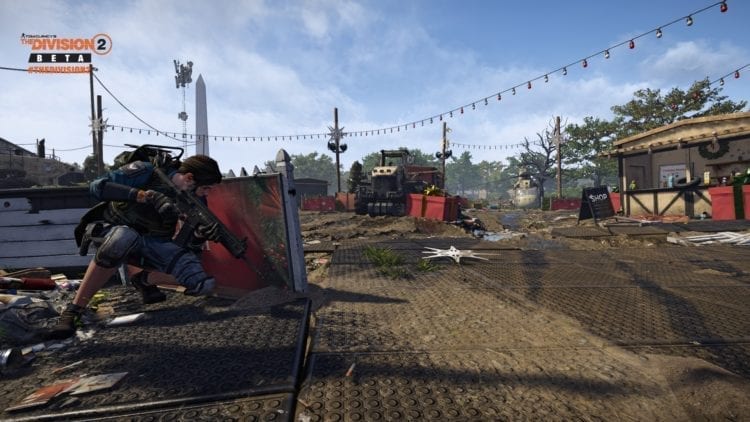 Sadly, since the game can’t be paused, Photo Mode captures meant your character was idle, in cover, or doing bland poses. I just used F12 to take screenshots.

As I made my way to the White House, the game’s first base of operations, I discovered new and unique ways of customizing my character. You still have individual item pieces for various body parts along with mods to improve them. But you also have over a dozen character perks. Some provide a third weapon slot, another nets you more XP from headshot or multi-kills, and there’s even one that unlocks a harder bounty once per day. Obtainable skills include turrets, seeker mines, drones, shields, and more. It should be said that a number of skills and modifications weren’t available during the beta such as the good old pulse. 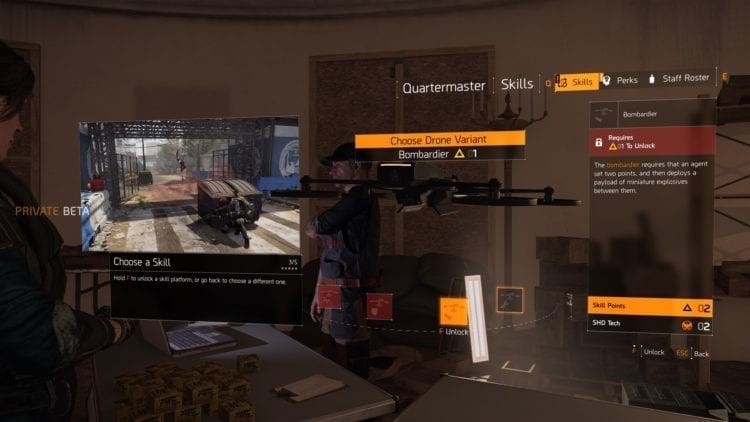 Only a handful of skills were available for the beta.

From there, I went straight ahead to finish a couple of side quests and capture conflict zones nearby. I realized that The Division 2 has you going ga-ga with the loot. Almost every zone, no matter how big or small, has a number of caches and boxes just waiting to be opened. Some would have crafting materials, others would have weapons.

Then, I ran into another odd issue. Loot caches allow you to directly equip items. Meanwhile, loot dropped by enemies does not. They go straight into your inventory, which means opening the screen and equipping items manually.

I don’t know if that was an oversight but it seemed mind-boggling. When you’re leveling up, you’re likely to find upgrades as you go along. You’re more than likely equipping new stuff, and so the difference between loot pick-up methods was strange indeed. 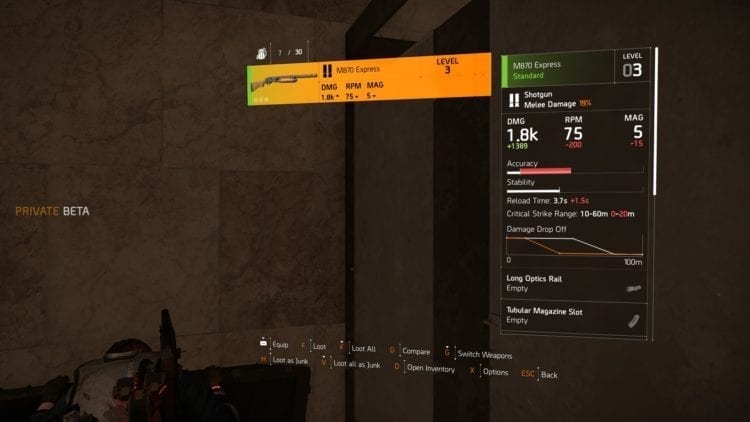 The controls are also a little odd. For instance, Parkour Mode, a feature of the first game’s PC version, makes its return. It allows you to jump over obstacles when you’re running rather than stopping when you collide with them. I never got used to it since I preferred tactical play, moving from cover to cover. When I had it enabled, I ended up hopping over cars and boxes only to get shot.

But this time, even disabling it still didn’t help. That’s because of the spacebar, which is a single button control that handles several functions, including: getting into cover, getting out of cover, combat rolls, and climbing on obstacles. 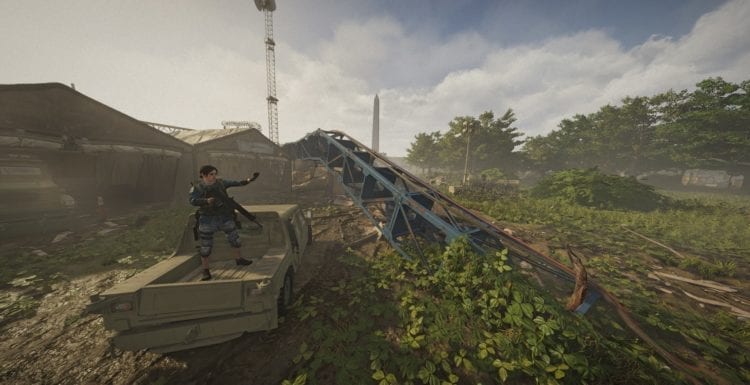 Even though some objects are of the same height or look like you can get on top of them, you actually can’t like that fallen beam next to my character.

That led to some clumsy moments when tried to switch positions during a firefight, only to end up rolling, then getting out from cover, and then climbing atop boxes. I had to switch to a gamepad, which wasn’t much of a fix because of the way weapon switching works. For a mouse and keyboard setup, you can switch weapons using number keys. For the gamepad, it’s just the Y button. You tap to switch between the first and second weapons, while rapidly tapping lets you switch to your third. Sadly, it sometimes switches back to your first or second weapons as well. I’m wondering why they didn’t just use Destiny’s “hold Y button” scheme to switch to your third weapon slot.

It wasn’t just the combat controls but the environment that you can interact with. For instance, as you can see in the image, low walls or car hoods let you mantle on top of them. But that fallen beam that looks like you could easily climb? Nope, you can’t do that. Certain areas may have boxes or barricades that you can jump on, but there are also plenty of obstacles that you can’t interact with. There were also times wherein I’d try to move from one edge of the barricade to another only to suddenly realize I wasn’t in cover anymore for some unknown reason.

The controls were clunky and imprecise. Even the menu navigation didn’t do the game any favors and I’m glad I wasn’t the only one who noticed it. Here’s a Reddit thread that summarizes how flabbergasting these UI navigation controls are. 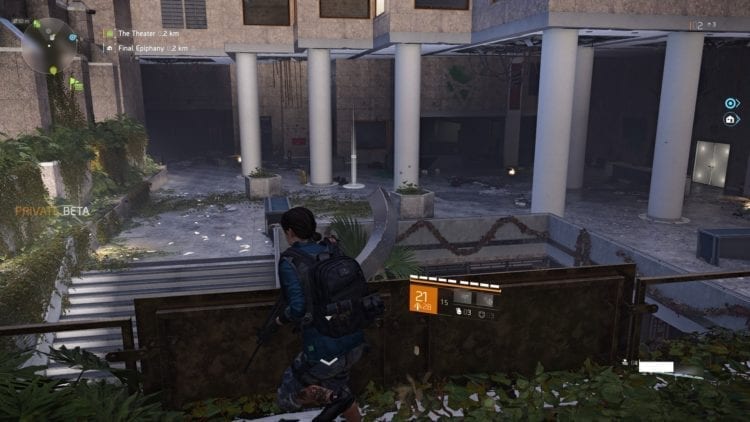 Some objects let you take cover or hop over them, yet similar objects (in different parts of an area) won’t let you do these at all. Couple these with clunky controls and you’re bound to wonder what’s going on.

I’ve played roughly five hours of the private beta and I haven’t progressed far in the game. It’s not because it’s difficult, it’s because of the disconnections that happen very often. I even checked out a troubleshooting guide in The Division 2’s official forum making sure that my connection was stable, and my firewall wasn’t causing issues. Still, no dice.

It genuinely didn’t matter if I was playing solo or with a random player. There’d be a disconnection every 10 minutes or so. It probably wasn’t as bad as Anthem where you couldn’t even log on during the VIP demo. 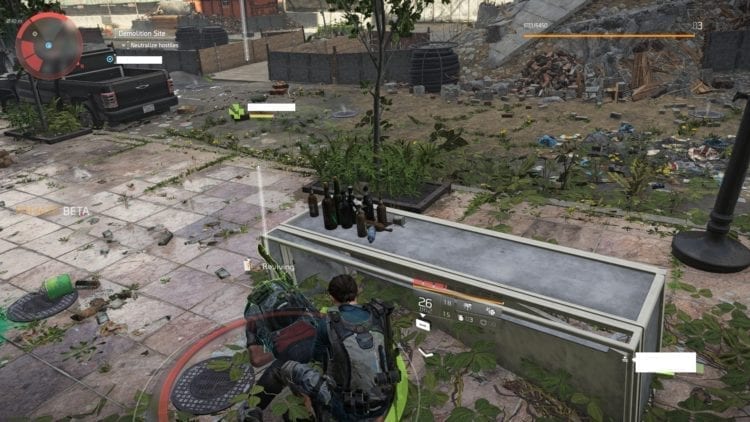 I made a few friends during the beta. Here I am reviving one teammate. He also ended up inviting another buddy.

The problem is that if you disconnect during a mission, you have to restart from the beginning or a checkpoint. If you disconnect while free-roaming, you’ll go all the way back to the nearest safe zone. That meant a lot of replaying and backtracking. It also seems that a number of PC players are experiencing the same issues and regions/locations had nothing to do with it.

Even worse was that getting disconnected meant that my settings were not saving. One setting in particular kept telling me that agents were looking for backup. I actually had to check Reddit to see how to disable it since it wasn’t in the settings. It was in the mini-map’s matchmaking section! 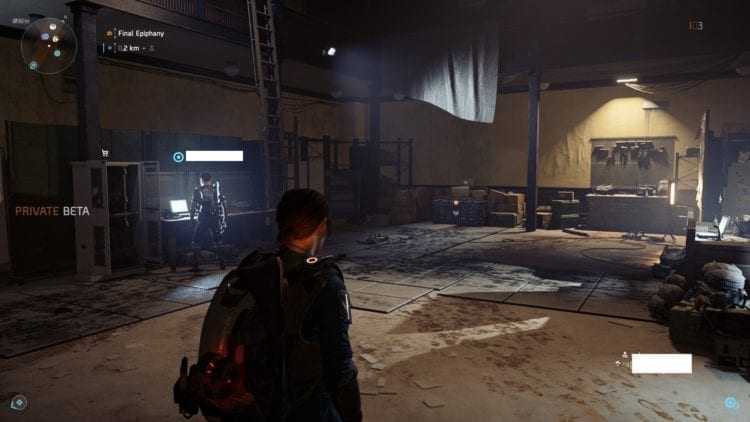 Here we are back at the safe zone two minutes later… because we all got disconnected.

You might be wondering why I’m being overly critical of a beta. The point is… it is the beta. That’s a good reason to point out some glaring issues now so that they can hopefully be fixed before the game is released. Betas are a good time to revise some existing systems to come up with better ones if time and manpower allow.

I’m sincerely rooting for Massive to deliver a great experience since they’ve managed to turn the first game around. They’ve learned from those lessons and they know what the fanbase wants. I’m also genuinely excited to see what the endgame loop has to offer. That’s very important for me as part of an ever-evolving online game.

But to get there, a lot of existing problems need to be fixed. You already have the graphics and the audio, and a ton of loot to be amazed by. Now all you’ll need to look into are the controls, UI, and connectivity. Oh, and maybe a pausable Photo Mode as well.