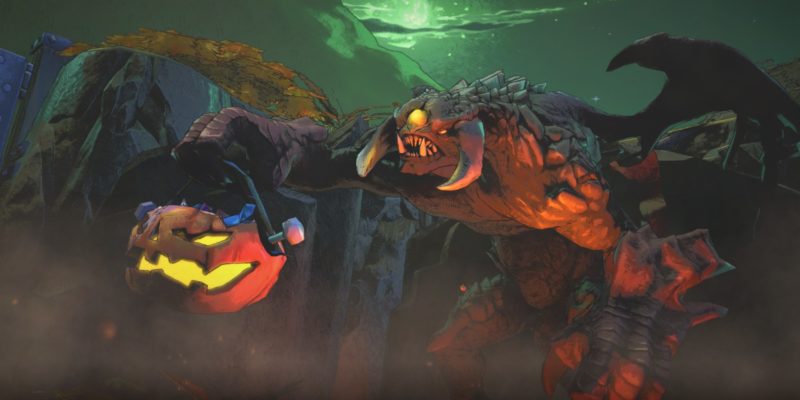 The spooky season has returned to Dota 2 with the 2020 Diretide Halloween event. It’s been seven years since Diretide graced Dota players with its ghoulish machinations, and Valve certainly knows it. The trailer that dropped alongside the announcement seems to make fun of the lengthy interim. I mean, the last time it was held was in 2013, after all. For the event, Valve has prepared more than 75 treats and goodies to claim, ranging from emotes to Halloween-themed set gear and a lot more. But you’re gonna have to earn it.

And the fight won’t be easy, from what I can gather. Roshan is prowling the woods, looking to steal candy, lives, or both. Most likely both. The goal in Dota 2‘s Diretide event is to take down creeps and steal their precious cargo: taffy. With the candy in tow, you toss it into a jack-o’-lantern bucket. Of course, that doesn’t mean your booty is secured. Your foes can steal your candy, so you need to be a defensive-minded trick-or-treater. All the while, you are stalked by Roshan, whose bloodlust can only be halted by <checks notes> hurling candy at its eldritch face.

It’s not too different to the last Diretide, but it has some changes. From what we’ve seen, teams battle it across a series of rounds, with the first to claim three wins being ultimately victorious. This time it seems to be pretty solely focused on taking down spooky Halloween Diretide creeps, stealing their sweeties, and lobbing them into your bucket. Whoever has the most in their bucket at the end of the timer wins that round, and then it’s onto the next — but with a different selection of creeps, some of whom have special abilities, and with all the items and levels you gained. You’ll also need to take down scarecrows to get an advantage over your foes, and of course, feed Roshan candy when he starts chasing you.

Trick or treat, or actually just give me the treat

Naturally, what you probably will care about the most in Diretide is the rewards, or treats. Valve is offering more than 75 rewards for playing during the event. They include item skins and sets for heroes. There are also emotes to claim, as well as visual effects such as a swarm of flying bats. You can also claim audio effects, such as evil laughter or “Violin Stabs,” which will unleash your inner Hitchcock.

The big prizes seem to be in the Hallowed Chest of the Diretide. You can earn said chests while matchmaking during the event, but they’re only unlockable with the right key. And you can purchase the key for $2.50 USD, so it’ll be up to you and your wallet if the cost is worth the mysterious treasure inside. There are shiny Emblems on offer for the super lucky, but also four Immortal sets and eight Immortal items. And Ambient sets. And a lot more.