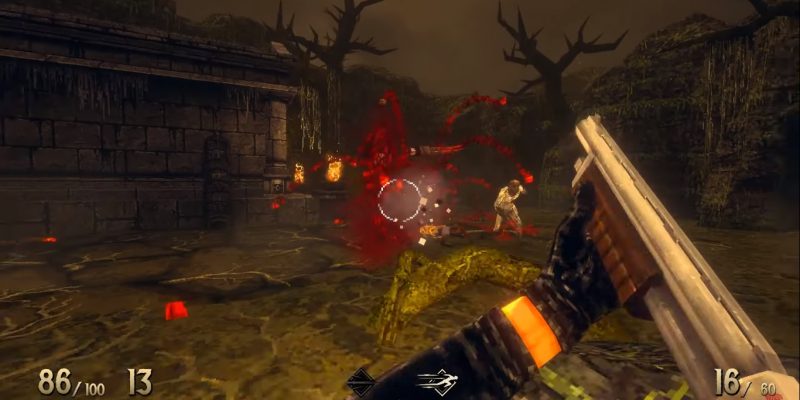 Dread Templar is an upcoming first-person shooter inspired by the likes of classic Doom, Quake, and other alike games from the ’90s. It’s being developed by T19 Games, an indie studio out of Prague in the Czech Republic. The game is currently planned for other digital platforms as well, but no specific names were given at this time. A Dread Templar announcement trailer was released today alongside some information about the game, which heads to Steam Early Access this fall.

The game should be very familiar to anyone who has played those classic FPS games I mentioned above. In the trailer, we can see multiple different types of weapons used. Everything from dual wielding pistols, a double barreled shotgun, and a magnum are at your disposal. We even see katanas that can be used to slash enemies. You can even hurl the blades themselves from a distance. According to the game’s official press release, there are also “infernal weapons” that you can wield. Presumably, these infernal weapons are designed to add a more supernatural flair to the carnage.

Players can also use abilities called Dread Powers for extra mobility and ways to dispatch enemies. In the trailer, you can see a dash you can use to zip around the level. Just like the original Doom, movement seems paramount, and you will want to keep running around to stay alive. There’s also bullet time, as well as other modern conveniences in the game. You can check out more in the Dread Templar announcement trailer below.

Not much is known about the story other than that you play the titular Dread Templar — presumably referring to the Knights Templar of old. You travel to this hellscape seeking revenge, but for what we are not yet sure. Whatever it is though, these demons are going to pay for it, as the Templar cuts a bloody swath through the underworld.

You can add Dread Templar to your wishlist on Steam right now before it hits Early Access later this year. The developer plans for a full release in 2022.

Forza Horizon 4 Steam edition — Is this open-world racer still worth it?