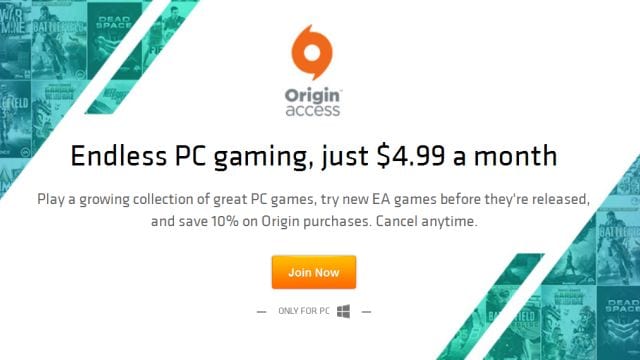 EA’s ‘Access’ subscription service is jumping over to the PC, and looks like it will use much the same sort of structure as the ‘EA Access’ system on the Xbox One.

On PC, it’s called Origin Access instead, and will cost $5.00 USD / £4.00 GBP per month. For that price, EA is offering up a selection of games from its vaults, along with the promise of limited early access to upcoming releases (Battlefront gave you an early 10 hours, for example), and 10% off across all Origin purchases.

Here’s what’s currently part of the vault (in the US at least, EA says it may vary slightly country-to-country). More games will appear there over time, so this just the starting set:

Origin Access will be available in the US, UK, Canada and Germany at first, with other countries to come. Importantly, it states that you can cancel Origin Access at “any time”.

By most measurable accounts EA Access has done very well on Xbox One (which is probably why we’re now seeing it on PC). If it continues to hoover up revenue and player interest, you can be sure that the other major publishers will launch their own subscription services.

Homefront: The Revolution activates sleeper cells on 17 May

By Ben Simmons43 mins ago
News

By Cristian Aguilar5 hours ago
News