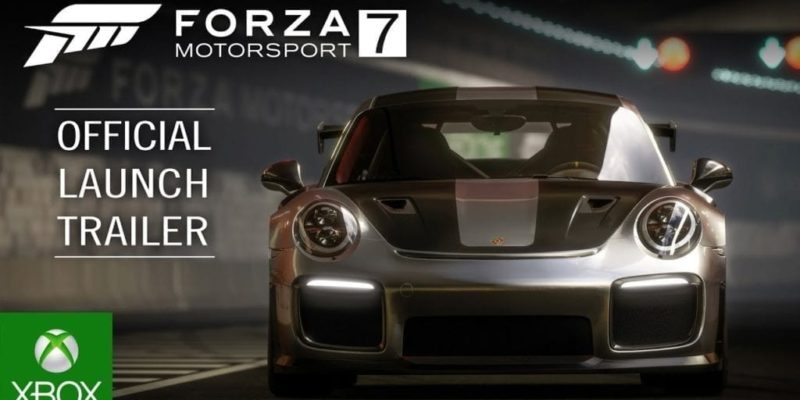 I was at EGX 2017 last week and as a racing game fan, it was the perfect opportunity to try out all the new racing games. Sony had the latest Gran Turismo, GT Sport. Microsoft was showing their new Forza game, Forza Motorsport 7. Bandai Namco had Project CARS 2 on display. So, with all these great racing games on show, it led me to question who had the best racing game?

The first racer I got my hands on was Microsoft’s Forza Motorsport 7. This is one of the games that is being used to push the new Xbox One X and playing it at full 4K, 60 frames per second, it’s easy to see why this is one of their flagship titles for the system. The game looks stunning, with great particle effects, long draw distances, and lots going on on-screen. I got to play the Dubai circuit, which is a new entry to the franchise. The track is a road circuit that takes you from a populated area, into the desert, and then back again. It’s the desert area that really stands out visually as there is sand blowing across the track and makes the edge of the track harder to see. The game flows along beautifully in buttery smooth 60 frames per second and is a real feast for the eyes. The handling model seemed to react to the different contours of the track more than ever before, with drivers really forced to keep an eye on where they are placing all four wheels of their car. Forza Motorsport 7 doesn’t really do much different than the rest of the series but when you have such a solid foundation a full revamp is not what is needed. This is looking like it will be another fabulous racer and a fantastic advert for what the Xbox One X can do.

Next up was Sony’s Gran Turismo Sport. Like Forza this is another 4k 60 frames per second racer (on PlayStation 4 Pro). The demo I got to play was a Group 3 race on the full Brands Hatch circuit. The setup was very similar to the Forza demo with the game being demoed on quality force feedback wheels and pedals, nice 4K monitors, and suitably rumbling sound systems. Visually, it’s hard to separate this latest Gran Turismo entry from Microsoft’s racer. I found that Forza has more particle effects going on with the weather, sand, tyre smoke, and alike being more prevalent. GT Sport had busier track-sides though with more buildings, crowds, and ancillary things. The AI cars seemed considerably more aggressive than Forza with a lot of pushing and shoving going on. Handling seemed almost back on par with Forza which had overtaken the series in providing realistic simulation-style handling. The wheel and pedal setup I used had a lot of fine movement control on offer (something that is particularly difficult when using the DualShock 4 controller).

The other big racer I tried out was Project CARS 2. This is a game that has just been released and I got the chance to try it on an impressive PC rig as well as the PlayStation 4 Pro version of the game. The PC version was presented on a 21:9 curved monitor running in 4K and wow was it impressive! Lighting, reflections, and all visuals were considerably better than Forza or GT Sport. Obviously, this was running on a powerhouse of a PC but it is the best-looking racing game I have ever seen. While not 100% photorealistic, it is definitely getting close. The console version had a lot to live up to and despite running on a PlayStation 4 Pro it couldn’t live up to the PC version (though a PS4 Pro is probably 20-25% of the cost). Gone were a lot of the reflections, complex lighting systems, and some of the particle effects. This isn’t to say that it is a bad looking game, but I would say out of these three console racers it is the least visually appealing. Just like the last game, the handling model is very good with the game doing a great job of mimicking the experience of driving a powerful car on a racetrack. This really is the most hardcore of hardcore racing simulators.

Racing game fans really are spoilt for choice this year. We have already had the brilliant DiRT 4, the sublime F1 2017, and even the upcoming Need For Speed looks like it could be a return to form. For fans of a more simulation-style racing, Forza Motorsport 7, Gran Turismo Sport, and Project CARS 2 provide exactly what you want. Whether you own a PC, PlayStation 4, or Xbox One there is a game that caters to you. Ranking these games would be extremely tough as they are all very close. What I would say is that if you are playing on a PC you should get Project CARS 2. If you are playing on PlayStation 4 you should get Gran Turismo Sport. And if you are playing on an Xbox One then Forza Motorsport 7 is the game you should pick up. This might sound like a bit of a pathetic answer, but it really is the best way to go.

By Sam Robins49 mins ago
News