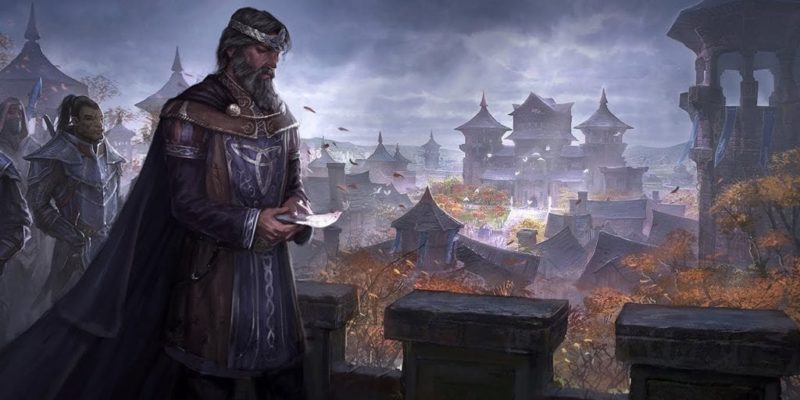 Nolan North will probably be voicing the third building from the left.

Not content with hiring Patrick Stewart and Terence Stamp for Oblivion and then giving them about 10 lines each, Bethesda have found an address book full of the phone numbers of movie (and game voice-acting) legends, and have sent them all cheques and instructions to turn up at a recording studio for The Elder Scrolls Online. In case you’re about to close this window in disgust – either at this being a news item of “voice actors confirmed for game”, or at my general disregard for The Elder Scrolls Online – I would advise you to watch the video below. It’s great.

John Cleese gets top billing by virtue of being John Cleese. He’ll be playing Sir Cadwell, a “cheerful and endearingly mad lost soul” who fears nothing, and may or may not be a pretty cool guy. Bill Nighy will be grumping around as High King Emeric, a merchant prince who became a king. Kate Beckinsale will probably be donning skimpy outfits for her role as Queen Ayrenn, the leader of the Aldmeri Dominion and Queen of the High Elves, who apparently “is far more comfortable with a blade than her crown.” All indications are that this character will be so generic that her character model will have MADE IN TAIWAN stamped on it.

That’s not even remotely it. Alfred Molina is wizard/politician/head of the Empire’s Elder Council/”de facto power behind the Ruby Throne”, Abnur Tharn. Lynda Carter is Azura, Daedric Princess of Dusk and Dawn. Michael Gambon is The Prophet, a “mysterious old man who guides the player through their journey to retrieve their soul.” Malcolm McDowell is Molag Bal, the baddie.

No, that’s not all either. Peter Stormare plays Jorunn the Skald King. Jim Ward plays Mannimarco. Kevin Michael Richardson plays swordsman/martial artist Sai Sahan. Finally, Jennifer Hale – about the only person in game voice acting who can claim to be as ubiquitous as Nolan North – will be voicing Nord half-giant Lyris Titanborn.

Speaking of which, no mention of Nolan North yet. I’m sure he’ll turn up, though.

The Elder Scrolls Online is due out later this year. Below, you can find a 17 minute video with the cast talking about their roles and how much they’ve thoroughly enjoyed working on the game and so on, which is absolutely worth watching solely for Michael Gambon. He, uh… he doesn’t take the interview very seriously.