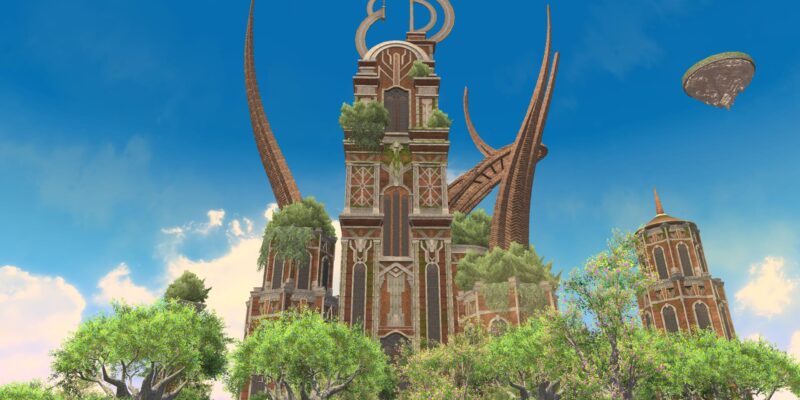 And now, in Final Fantasy XIV: Endwalker, we start reaching the point where pretty much every dungeon or Trial name winds up at least hinting at spoilers. This Endwalker – Ktisis Hyperboreia guide is no different.

While I won’t be talking about what’s to come, everything that’s happened before this dungeon is fair game — and obviously, there’ll be screenshots and discussion of the bosses that lie within. As such, spoilers lie ahead if you haven’t reached this dungeon.

With that out of the way? Let’s head into Ktisis Hyperboreia and start to really unravel the mysteries of the Final Days.

Skull Dasher — Tankbuster. Mitigate and heal as suual.
Frostbite and Seek — A snowstorm obscures the screen, and Lyssa vanishes. Follow the footprints to see where it moved to (it’ll be one of the little craters), and position yourself near the edge of the arena behind that. It will launch an AoE that hits the entire arena except for the small sliver behind it before reappearing.
Frigid Stomp — Unavoidable damage. Heal through.
Icicall — Three ice crystals appear around arena. These will fire off a line AoE through the arena. This will usually be cast at the same time as the first Frigid Stomp, but will happen periodically thereafter by itself.
Heavy Smash — Standard stack AoE on one party member. Group up to split the damage. 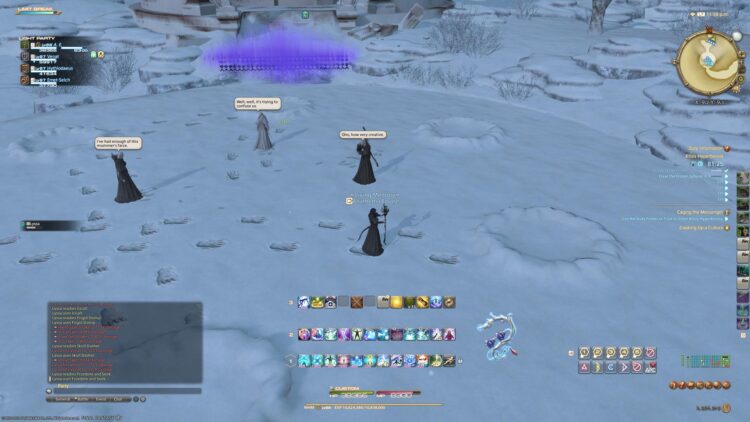 The footprints loop between craters, but they’ll end at one.

For being the Greek spirit of rage, Lyssa is a nice, simple boss. It’s pretty much the standard stuff, with the only trick being Frostbite and Seek. For this, you just need to find out where the footprints end: they’ll lead to one of the craters. Stand behind that crater, and you’ll avoid the attack to come. The footprints can lead to one crater and then another, mind; it’s the final crater with no more footprints that you want to be at. 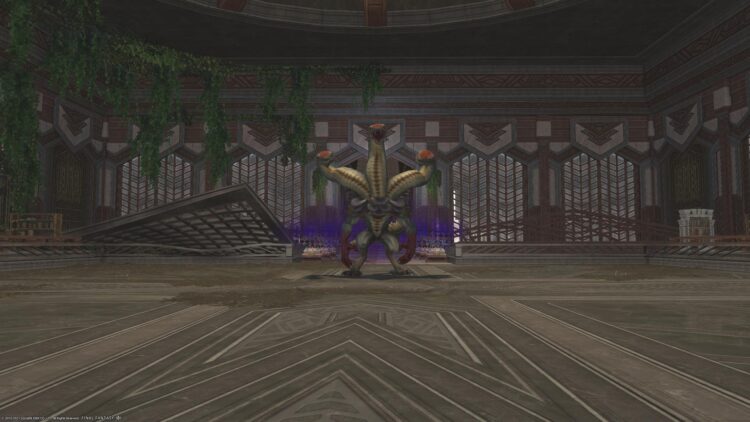 Scratch — Tankbuster. Mitigate and heal.
Inhale — One or more of the Ladon Lord’s heads will start to glow. This will lead to…
Pyric Breath — The glowing heads will unleash conal AoEs that each take up a third of the arena. Which heads are glowing indicates which areas will be hit: the left head will attack to the left, the middle head will attack in front, and the right head will attack to the right. Note that the left and right heads will hit directly behind the boss, so that’s not a safe spot.
Fiery orbs — Flaming orbs will spawn around the arena, independent of the boss using a skill. These are bombs that explode with Bomberman rules: a big cross AoE that spans the entire arena from each one.
Intimidation — Unavoidable damage. Heal through.
Pyric Blast — Standard stack AoE on one party member. Group up to split the damage. 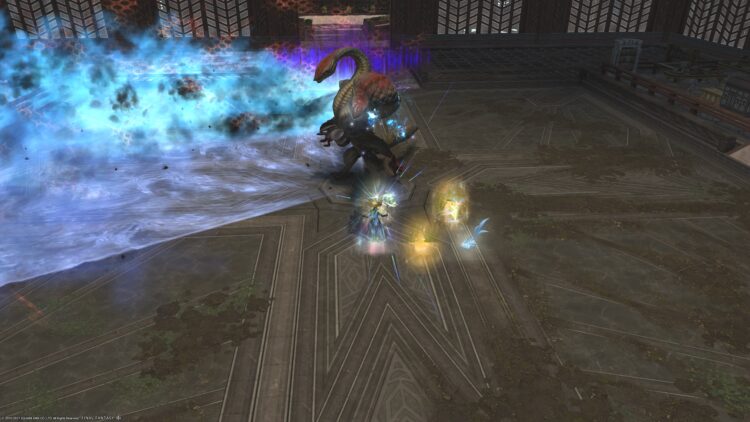 Pyric Breath is a sizeable cone. Mentally slice the arena into three and find a safe spot.

Another fairly simply foe, though Pyric Breath will likely catch new players off guard once or twice. Remember that each head’s Breath will take up a full third of the arena, so there’s no “default” safe position, and you have to kinda mentally map the arena out into thirds.

This is honestly easiest if you assume the left and right head “thirds” start directly behind the boss: this gives you a better idea of where the side attacks are going to go. With that and the fiery orbs of doom in mind, this is really just a battle of positioning. 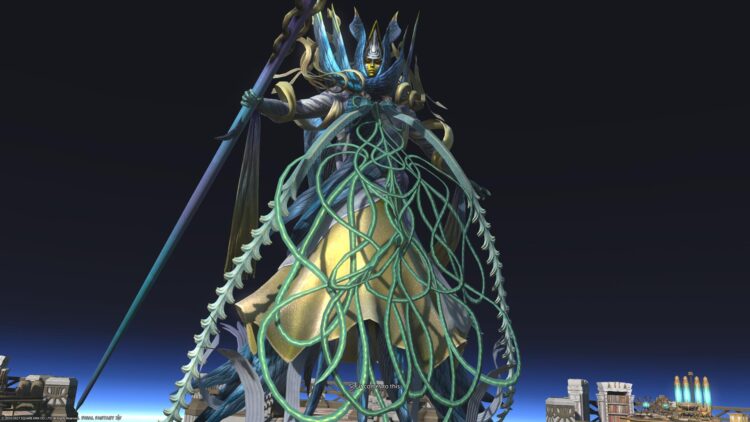 Trismegistos — Unavoidable damage, which also turns the outside of the arena into a swirling mass of wind that inflicts an undispellable Windburn DoT.
Hermetica — Hermes channels two green sigils on two sides of the arena. Each will fire off a line AoE with knockback. Stand in a “corner” to avoid (yes, I know the arena is a circle) and note that these are big AoEs.
True Tornado — Tankbuster. Mitigate and heal.
Meteor — Four distance AoE markers will appear in the arena. The dead center should avoid the most damage. Each AoE will leave behind… well, a meteor.
Double — Hermes’ next attack will be doubled up.
Hermetica (Doubled) — The same as before, except instead of two sigils on two sides, it’s four sigils on two sides, meaning there’s no corner you can hide in. Instead, note which sigils appear first (as that attack will launch first) and hide behind the one meteor that doesn’t have big orange glowing veins running through it. After the first Hermetica goes off, run around the meteor and hide from the second one.
True Aero (Doubled) — Unavoidable line AoEs targeted at each party member. Stand away from each other. After this goes off for the first time, a second AoE will be aimed at where the first hit: move to avoid this.
True Tornado (Doubled) — Tankbuster, and then an AoE placed on the ground where the tank was standing. Mitigate, heal, and then move.
True Bravery — Gives Hermes a damage up buff. This can be interrupted.
Quadruple — Hermes is very pissed off, and his next attack will be quadrupled.
Hermetica (Quadrupled) — Two green sigils at each side of the arena. Again, make note of the order in which they appear and move to dodge; there’s no single safe spot here either.
True Aero II (Doubled) — Basically the same as True Aero (Doubled), but with circle AoEs instead of lines. You’ll get hit by the first, and then then the second set of circle AoEs will spawn around Hermes. 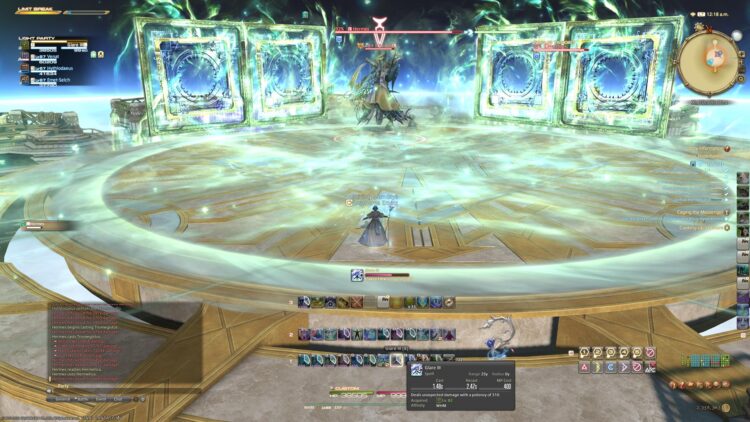 You can just about see the Hermetica AoEs here, but yes: the “corners” are safest. Don’t be anywhere near the center of the arena.

Whew, that’s a lot of attacks. Most aren’t too bad. The ones you need to worry about are mostly Hermetica, in all its forms.

So let’s quickly go over that. Basic Hermetica is just “run to a corner” and you’re safe. Doubled Hermetica means you need to remember which set of sigils spawned first, hide behind the meteor that’s just a grey rock, and then shift position around that meteor to avoid the second set of sigils when they go off.

Finally, Quadrupled Hermetica is basically “dodge things.” There are two ways of going about this. You can stand in the center of the arena and make minor adjustments to dodge (each attack will only barely clip the center of the arena from one side or another), or you can stand in a spot that’s safe from the first two attacks and then move for the last two. I prefer the latter, but that’s just because it means I have less to remember.

With that, Ktisis Hyperboreia is done, and you’re on your way to learning more about the Final Days. For more guides and help with the coming content, check out our guides hub — but scroll down slowly. You wouldn’t want to spoil anything for yourself, believe me.