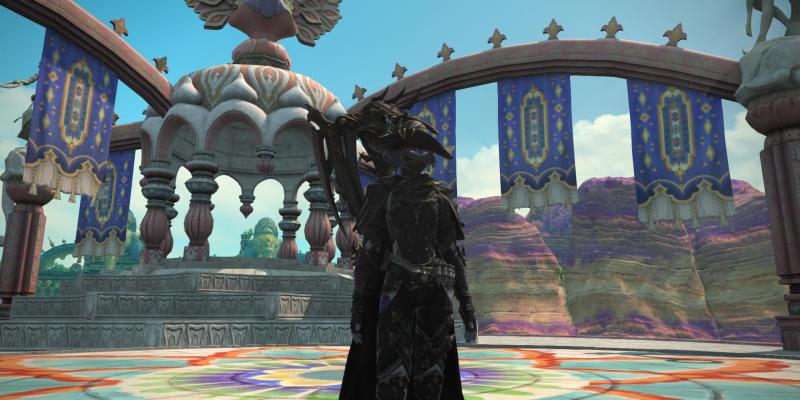 Along with a bunch of other media folks, I’ve had the privilege of spending a day messing around with Final Fantasy XIV: Endwalker, and now I’m free to tell you all about it. I got to experiment with Endwalker‘s Reaper gameplay, the Sage job, the expansion’s first dungeon, its areas, and the other job adjustments. That said, “all about it” is a bit of a misnomer because what we could actually see was limited, so let’s quickly go over how I’m dividing this up and what I won’t be discussing.

In terms of spoilers: if you’re up to date on current content and have watched the Endwalker trailers and reveals and so on, there’s not much “new” here except maybe the identity of the first dungeon. But I’m not going to be revealing unseen areas or important plot details. Obviously, if you want to stay completely fresh (or aren’t up to date), you shouldn’t read this. But if you’re caught up on content and know about the revealed areas and so on, you should be safe.

We’ve got another article up talking about the Sage job in detail, plus one talking about the dungeon we played and a third article discussing the areas we got a look at and the “old” jobs I played with. But here? Here, we’re going to talk about the Reaper.

Obligatory disclaimer: this was all played on a development build of Endwalker, so everything is very much subject to change. While I doubt abilities are going to be excised before launch, numbers are definitely liable to change, so don’t take these as set in stone. Likewise, remember that Endwalker will be coming with a number squish, so if potencies seem low that’s because literally everything — damage, heals, HP totals — have been lowered. 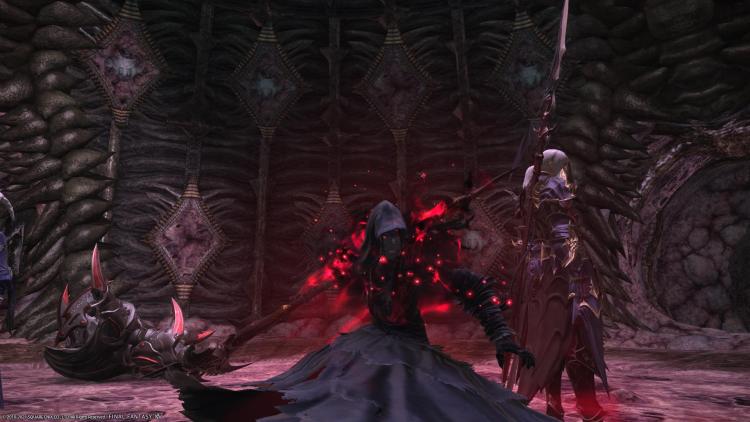 I think that when I first wrote about Reaper, I said something about how it looked very Devil May Cry in terms of having a lot of fast-flowing combos that had a lower-than-normal GCD (global cooldown). Now that I’ve spent a few hours fooling around with it, that’s actually not far off the mark.

The Reaper is the new edgy class of Final Fantasy XIV, nudging Dark Knight off that pedestal with a poke from its scythe. While Paladin might be the face of Endwalker, I suspect Reaper is the class that everyone wants to try out. So, let’s talk about the actual Endwalker Reaper gameplay.

The basics of Reaper is that it’s a melee DPS class with a scythe and a demon. Or, well, voidsent. It’s also a relatively complex class, and one I’m going to have some difficulty trying to sum up, but let’s give it a go. I’m probably going to go into less detail than I did with Sage, however. 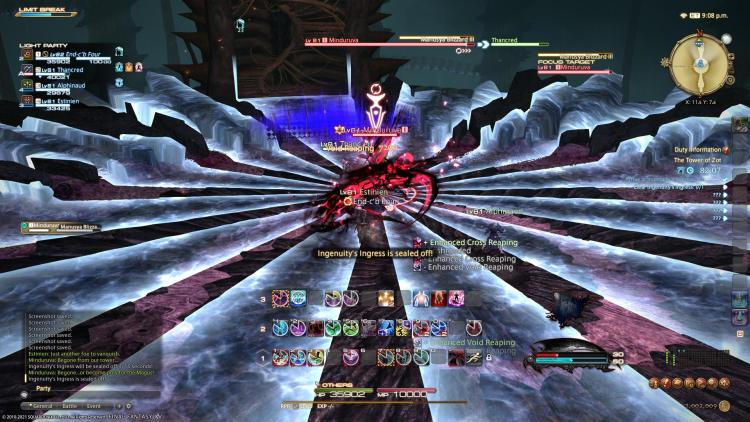 That ice attack is going to melt just like the boss’ health pool.

The fast and the furious

The general Endwalker Reaper gameplay is mostly to dish out huge amounts of melee damage in very, very rapid burst phases, and they’re focused pretty heavily on single-target damage. They have the standard melee class kit: a basic combo that does damage, some minor self mitigation and healing (neatly, it’s a 10% HP shield which, when broken, gives regen to everyone around them). Nothing hugely special. They don’t appear to have a damage-over-time effect, though that might just be me being an idiot and missing it. They do, however, have a Death’s Design debuff they can drop on enemies that increases any damage the Reaper deals to that enemy by 10%.

Where the Reaper’s real strength comes from is those burst phases. See, Reapers have two gauges — a Soul Gauge and a Shroud Gauge — and both of these allow for significantly stronger and faster attacks. Your regular combos build up the Soul Gauge. When this hits at least 50, you can expend it to fling out Blood Stalk, an instant attack that gives you a stack of Soul Reaver. And this lets you use one of your positional attacks, which hit incredibly hard and start boosting your Shroud Gauge.

Thematically, the Soul attacks have your voidsent come in to do damage, though it’s a purely thematic thing — it’s not a pet mechanic or anything. And by “hit hard”… well, bear in mind that with the stat squish, potencies are generally lowered. If you’re alternating between these attacks and hitting the positionals correctly, then you’re hitting for 520 potency. To contrast, a Dragoon’s Fang and Claw or Wheeling Thrust, with positional, is 300 potency. Big damage. 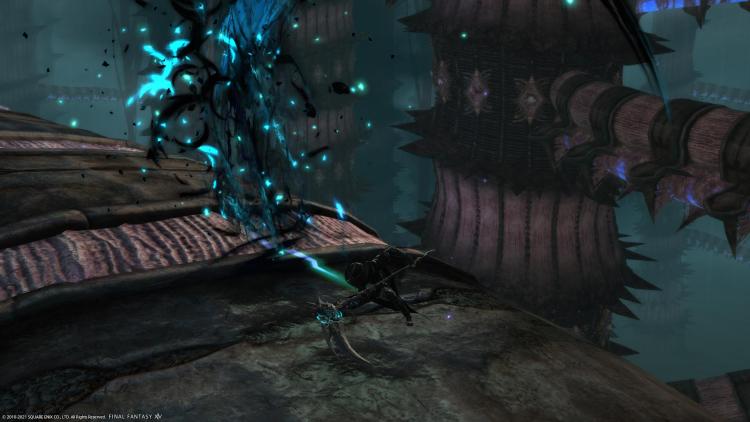 Reaper attacks are color-coded: most are blue. When you’re Enshrouded, the animations get more uncontrolled and angry, and the effects are red.

The faster and even more furious

Well, when your Shroud Gauge is high enough, you can use Enshroud. This merges you with the voidsent and gives you five stacks of Lemure Shroud, which will last for a total of 30 seconds (so you’re not quite as hamstrung as some classes when going into this burst phase if the boss suddenly vanishes or becomes untargetable).

When Enshrouded, Reapers can unleash five attacks with a GCD of only 1.5 seconds (which cannot be reduced), meaning that you’re pushing out attacks significantly faster than other jobs, and these have the same potencies as the Soul attacks above but without the positional requirements. This gets even more ludicrous at level 90, where you can finish your Enshrouded combo with Communio, an attack with 1,000 potency that also hits nearby enemies for 400. It’s a big and nightmarishly fast burst phase. Again, this is after the stat squish that lowered most potencies.

Bear in mind that numbers aren’t final, and that plenty of other DPS jobs also have some seriously big numbers, but even so. The sense I get from Reaper is that it’s a job that ebbs and flows more than most: you build up your gauges and can then absolutely unleash on your enemies, inflicting a terrifying amount of damage in a very, very short span of time. And then you’re back to building things up again.

This’ll be most effective in dungeons where you can use trash mobs to build up your gauges and then pull out your voidsent for bosses. But regardless of circumstances, Reapers can push out a lot of damage in a very limited timeframe. And then there’s that debuff that increases the damage they deal by 10%. 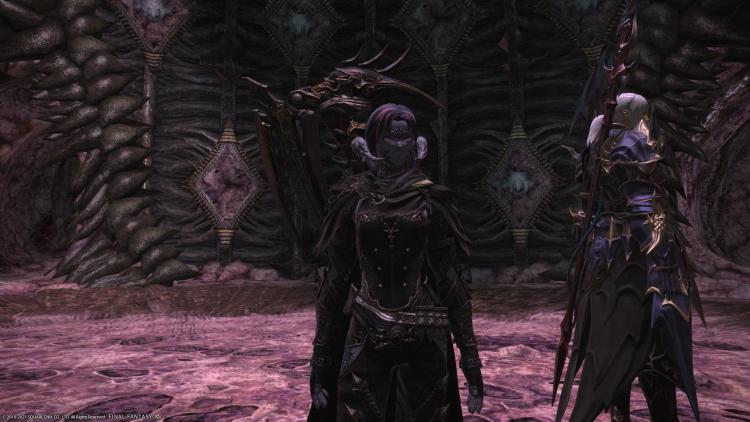 There’s a stark difference between a Reaper, and a Reaper merged with their voidsent… 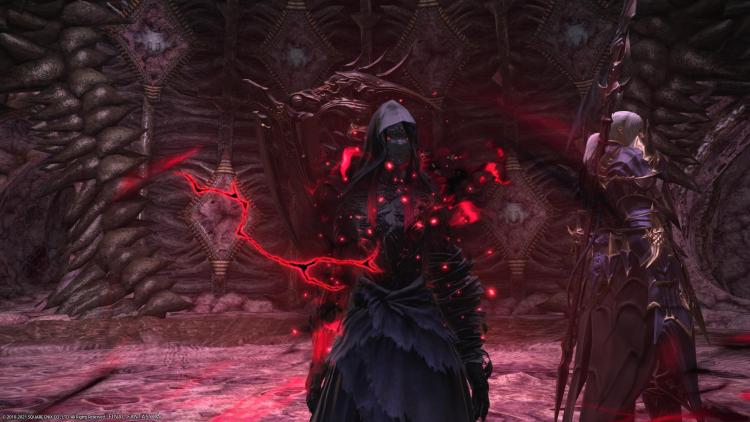 Endwalker‘s Reaper gets a touch more complicated at level 86, too, which is when they get access to Void Shroud — another resource which mostly seems to grant a few extra instant-cast attacks. I’m not going to lie: I didn’t experiment too heavily with what a Reaper can do above 82 because my time was coming to a close and I didn’t have much time with training dummies, but I’m still kinda blown away by how enjoyable it is to just tear enemies to shreds with what feel like much, much faster combos.

Melee DPS isn’t one of my main roles, so it’s hard for me to directly compare it to others and it’s entirely possible I’ve missed something very important in here. I didn’t bring up Soulsow or their AoEs, nor did I talk about the Arcane Circle skill that buffs you and your party and grants you Immortal Sacrifice stacks… which you can then expend to inflict yet more absurd damage. Like I said, in Endwalker, Reaper gameplay feels like it very much ebbs and flows as battles go on, doing average damage before suddenly going into some seriously heavy burst.

The other important thing, of course, is that they look cool. By default they look like something out of Bloodborne, but when you’re Enshrouded? That’s a chef’s kiss from me.