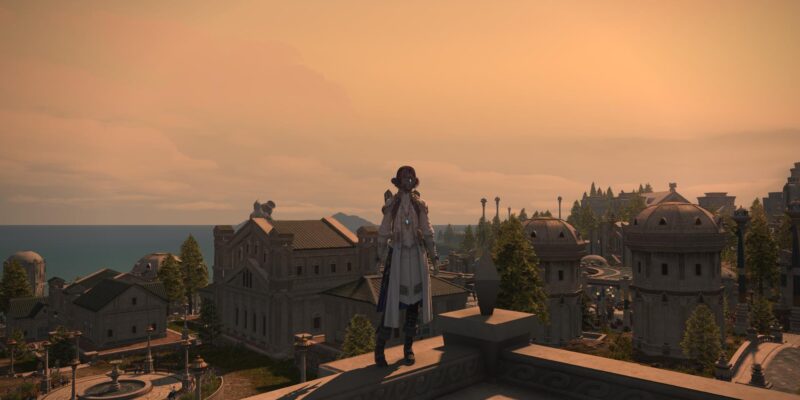 Along with a bunch of other media folks, I’ve had the privilege of spending a day messing around with Final Fantasy XIV: Endwalker, and now I’m free to tell you all about it. Endwalker‘s Sage and Reaper jobs, its first dungeon, its areas and other job adjustments. That said, “all about it” is a bit of a misnomer because what we could actually see was limited, so let’s quickly go over how I’m dividing this up and what I won’t be discussing.

In terms of spoilers: if you’re up to date on current content and have watched the Endwalker trailers and reveals and so on, there’s not much “new” here except maybe the identity of the first dungeon. But I’m not going to be revealing unseen areas or important plot details. Obviously, if you want to stay completely fresh (or aren’t up to date), you shouldn’t read this. But if you’re caught up on content and know about the revealed areas and so on, you should be safe.

We’ve got another article up talking about the Reaper job in detail, plus one talking about the dungeon we played, and a third article discussing the areas we got a look at and the “old” jobs I played with. But here? Here, we’re going to talk about the Sage.

Obligatory disclaimer: this was all played on a development build of Endwalker, so everything is very much subject to change. While I doubt abilities are going to be excised before launch, numbers are definitely liable to change, so don’t take these as set in stone. Likewise, remember that Endwalker will be coming with a number squish, so if potencies seem low that’s because literally everything — damage, heals, HP totals — have been lowered. 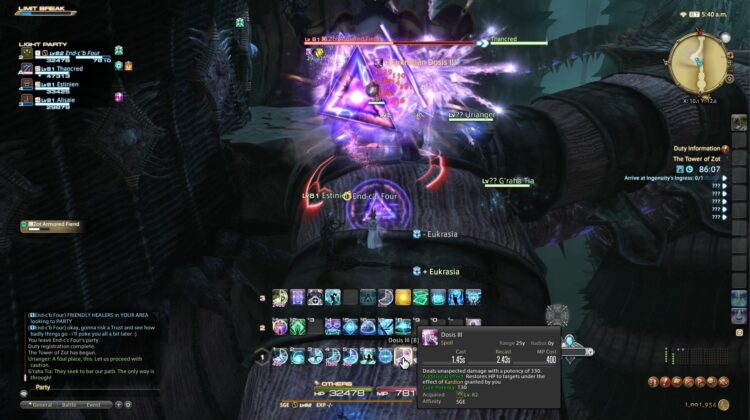 The Sage is the new healing job in Final Fantasy XIV: Endwalker, and it’s a barrier healer. It’s also quite unlike most other healing jobs in a number of ways. Sure, you’ve got your basics: a single-target heal, an AoE heal, a single-target attack, an AoE attack. What makes Sage interesting are, to my mind, three things.

First, Sage juggles two resources, in a similar-but-different manner to White Mage. You earn Addersgall every 20 seconds, and this can be expended to use certain healing or protective abilities while regaining mana. Meanwhile, you earn Addersting when your single-target shield ability is destroyed, and you use this for offensive abilities. And most of these abilities have sizeable recast times of their own — they can’t be spammed on GCD.

For instance! Kerachole costs a single Addersgall point, and is kind of a jack-of-all-trades. It reduces the damage taken by the party by 10% for the next 15 seconds, applies a regen effect, and restores 5% of your maximum mana. The downside is that you can only cast it once every 30 seconds, which means if you were only using this, you’d never run out of Addersgall. This is why you also have Druochole (an instant-cast 600 potency cure), Ixochole (an instant-cast AoE cure), Taurachole (like Kerachole, but single-target), etc. So far, so White Mage. 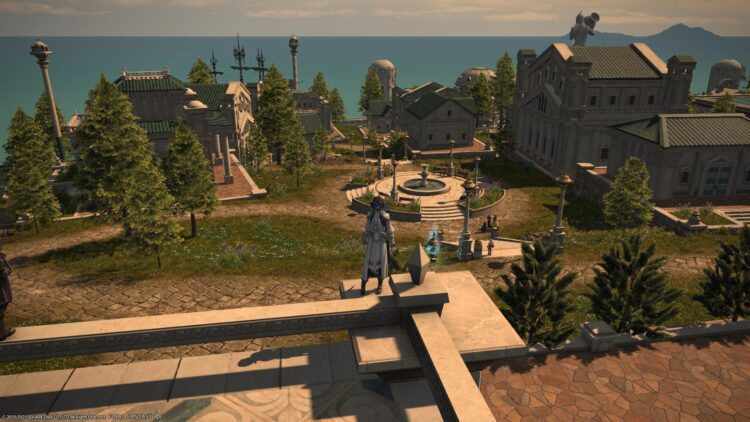 A Sage standing precariously on the balcony of the Leveilleur Estate, some time ago.

But it’s not White Mage

The second and more interesting thing is Kardia. You plop this onto a party member (usually the main tank) and they get a permanent buff called Kardion. With this, pretty much every single attack you make will heal that person. It’s not a huge heal, as it’s closer to a tick from a regen ability, but it synergizes nicely with any healer’s actual goal of “do damage until someone desperately needs a heal.” It’s a double-edged sword, though: on the one hand you’re burning enemy health while healing your tank, but when you need to actually stop to move or cast anything else, that extra little regen effect also stops. 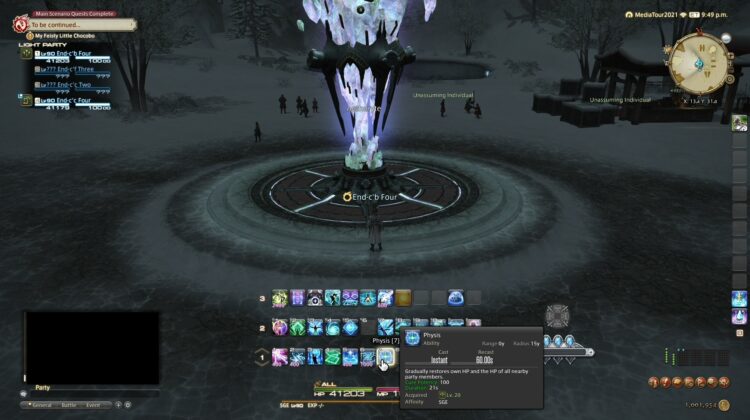 This was my view for about 15 minutes, attempting to sort out hotbars. Also: yes, the AoE regen is on a 60 second recast time.

Eukrasia basically says “Yeah, no” to all of that. With Eukrasia active (and it’s an instant cast), these three change to Eukrasian variants of the spells. Eukrasian Dosis applies damage over time (DoT) instead of damage, Eukrasian Diagnosis weakly heals the target and applies an okay-ish shield (seemingly a bigger one if it crits), and Eukrasian Prognosis is a very weak AoE heal and a pretty sizeable shield.

Like I said, it’s technically nothing major. Those three abilities could just be set to three extra buttons. But in practice, it feels very different. Rather than tapping a button to cast a spell, you’re effectively shifting stance to change from healing to shielding. It’s tricky to get to grips with (at least when you’re starting at level 90 and trying to arrange hotbars in a way that make sense), but after a little time spent playing, I was thoroughly enjoying keyboard-dancing my way from heals to shields to DoTs to damage, by basically shifting to Eukrasia and back.

It does also mean that a miskey of Eukrasia can be quite a waste of efficiency, so if you play high-end content, that’s something to bear in mind. It’s an instant cast with a one second recast, but one second is valuable time when it comes to Savage and Extreme content. And you’re balancing this out with recasts and your Addersgall and Addersting resources. 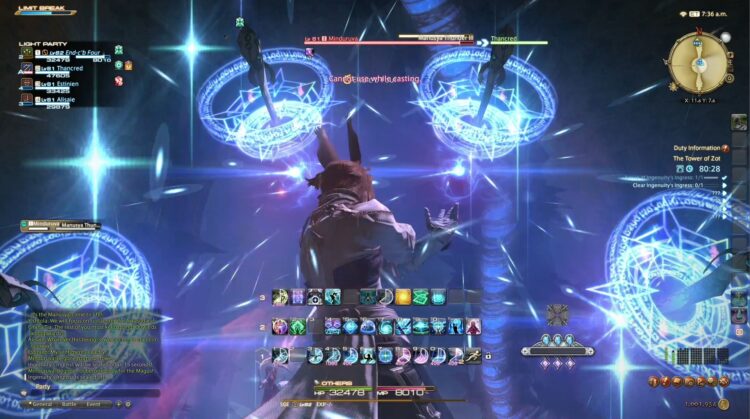 The eagle-eyed will see I have full stacks of Addersgall and Addersting. That’s because I’m too busy shooting lasers.

That’s hardly all there is to it. Sage has a whole lot of useful abilities with lengthy recast times, like the Addersgall ones above. It’s not quite to the level of early Scholar where so much stuff feels tucked away behind timers, but most -chole abilities have 30- or 45-second recasts, and then you’ve also got your panic buttons on two-minute timers.

It’s hard to judge Sage on the basis of fooling around with training dummies and low-level mobs, and doing one single dungeon synced to level 82, but I liked what I played. While White Mage will probably still continue to be my main, I’m probably going to put some serious time into Sage. I enjoy it more than I do Astrologian (although they share a few similarities in keyboard dancing and quick thinking, though it’s mostly cards with AST) and a lot more than I do Scholar. I doubt I’ll go through Endwalker as a Sage, at least in part because I’d have to level it up from what will presumably be level 70 and I have articles to write. But it may well be the second class I bring up to 90 unless I decide to embark on role quests sooner rather than later.

I’m also quite a fan of its aesthetics. I’m not sure about the headgear, but the Nouliths are cool little backpack laser things, and the laser noise causes the happy chemicals to flood my brain.

Also, Sage’s level 90 ability is Pneuma, which is a giant laser that blasts through everything in front of you. It also heals everybody and reduces incoming damage, but if you’re playing as a healer you likely don’t actually care about the well-being of your party and firmly believe they deserve what’s coming to them, so that’s irrelevant. Giant. Laser.