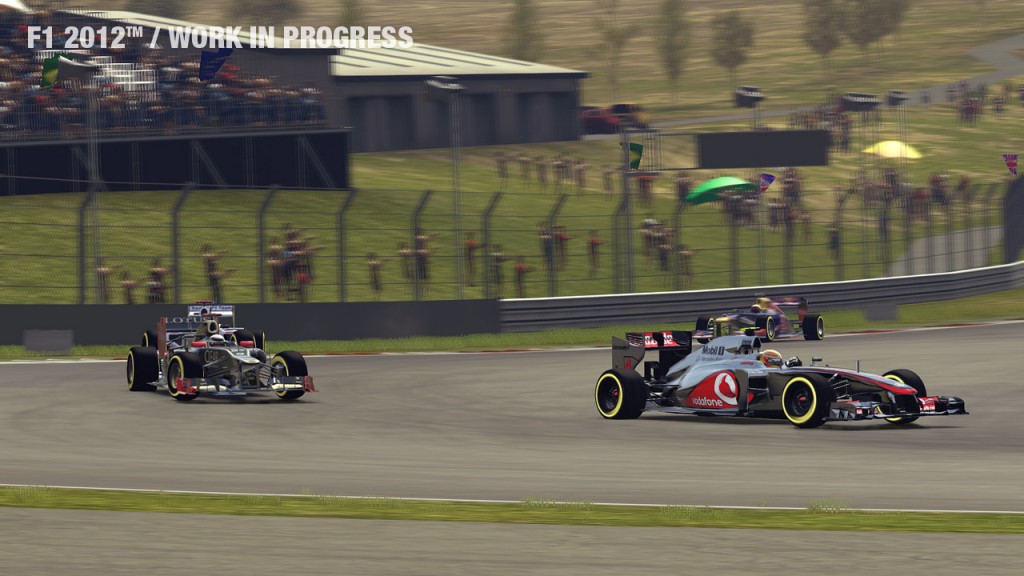 Formula 1 is a complex sport and, for some more than others, Codemasters’ F1 output is a complex videogame franchise. Videogame fans might love a good racing game, but that doesn’t mean they know the difference between KERS and DRS, or the nuances of tyre wear and race day engine management.

This is a problem that the F1 studio at Codemasters is well aware of, which goes a long way to explain many of the features we’ve tried and tested in our preview build of F1 2012. Teaching players about Formula 1 and the individual characteristics that separate it from other motorsports seems to be a real priority this year, starting with the young driver test.

Upon loading up F1 2012 for the first time you’re asked to select a team, in our build you’ve got the choice of McLaren, Red Bull or Ferrari (being a bit of a fanboy, I choose Ferrari), and it’s that team who will teach you the basics of the sport and car handling.

Over the course of 10 or so drills you’ll be introduced to what an apex is, how to use KERS, how to alter your driving style for wet conditions and how to figure out the optimum racing line. These lessons take the form of either a non-interactive video or a hands-on meander around the Abu Dhabi F1 track. Think Gran Turismo’s license tests, only fewer and much less punishing. 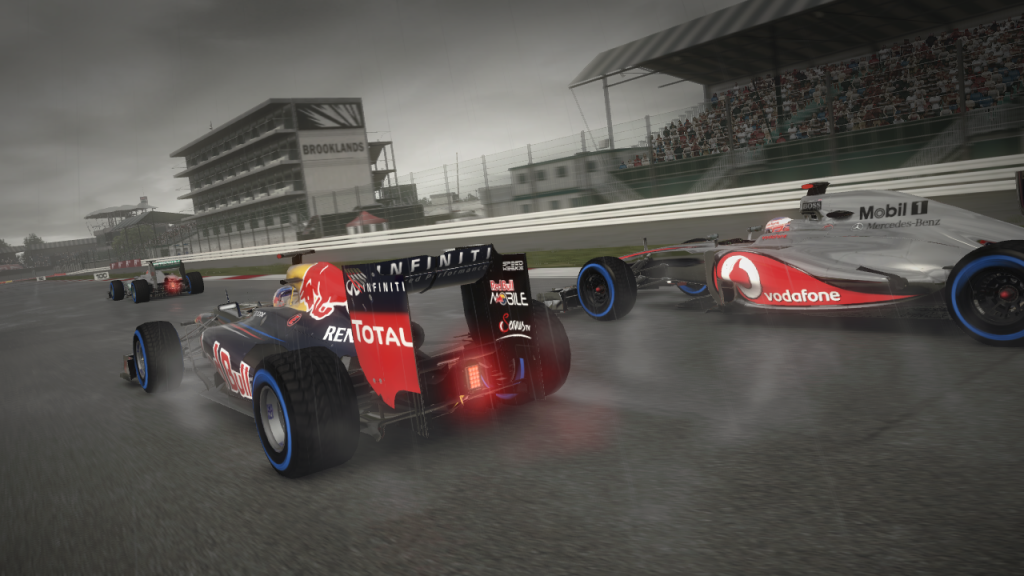 Of course, this all sounds very patronising to the hardened F1 fans that have played the games for the past few years and/or watch the sport religiously each season. If you fall into that category you can just skip the tests and move on to the game proper, no problem.

In our recent interview with F1 2012 game director Paul Jeal, he noted that one of the mistakes the team has made with previous games in the series is that they’ve presumed everyone playing them has an intimate knowledge of the sport. That has resulted in the games having a somewhat exclusive feel to them, not bothering at all to teach newcomers and those testing out the game on a whim.

The trick with any game based on a sport packed full on complex rules and a system that can’t be mastered in five minutes (including the likes of Madden, NHL and Fifa) is to incorporate elements for the more casual/inexperienced player without dampening its appeal to the existing fans. It’s a balancing act that so many games claim to have nailed, but so few actually have.

F1 2012 seems to be trying to get the balance right by keeping certain elements separate from one another. While the veterans are doing serious battle in full length seasons complete with realistic weather, handling and vehicle damage, the jump-in, jump-out crowd can indulge in shorter blasts with the new Proving Grounds and Season Challenge modes. 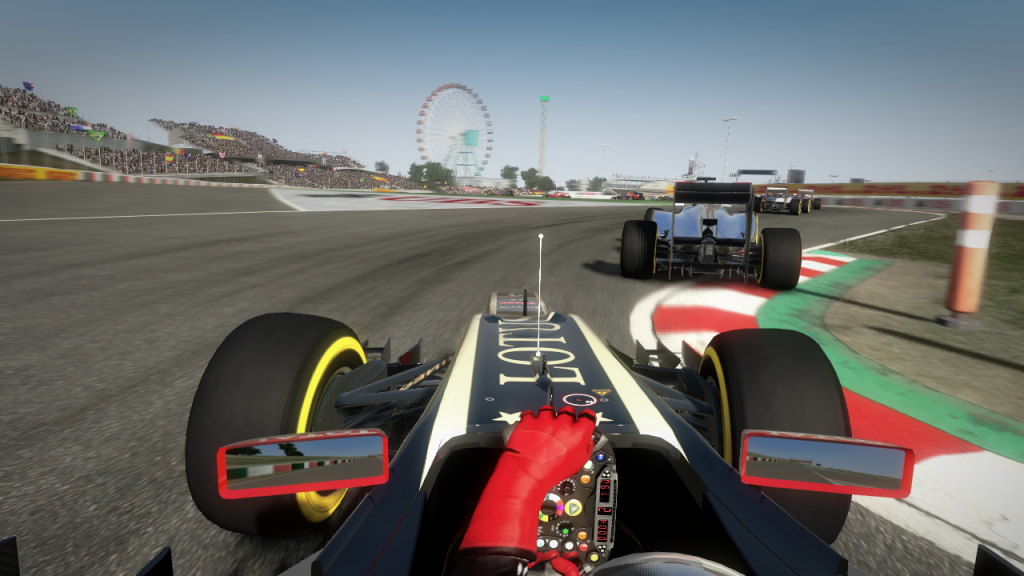 Season Challenge is an attempt at packing everything that’s present in Career Mode into just 10 races. You’ll start off racing for one of the teams that tends to fill up the back of the grid, perform well and you’ll be offered a seat at a better team. The goal is to be racing for one of  the premier teams (Ferrari, hopefully) by the time the 10 races are up.

It’s a neat idea. Not necessarily aimed exclusively at those who are new to the game/sport, but also those without the time to dedicate to a full 20 race season. Exceeding expectations in a single race and then finding yourself jumping from Marussia to Force India in less time than it takes to perform a pit stop might not be realistic, but realism isn’t really the goal of Season Challenge. The goal is to create a mode that provides some progression but doesn’t take 20-30 hours to complete.

Proving Grounds consists of Champions Mode, Time Attack and Time Trial modes – only Champions Mode is unlocked in the code we’ve been provided with.

A series of individual scenarios, Champions Mode tasks you with beating a specific goal within strict parameters. For example, one of the scenarios is set at the Brazilian grand prix with three laps to go in conditions that are wetter than whatever crap One Direction are releasing. Your goal here is to stay ahead of Lewis Hamilton and win the race. Lewis is good in the rain, and good at overtaking, so it’s more difficult than it sounds.

Other examples include catching up and overtaking Michael Schumacher after you’ve just been given fresh tyres, overtaking Jenson Button following a safety car and passing Sebastian Vettel while setting a fastest lap of the race.

The scenario idea is not new to sports games (both Fifa and Madden have equivalents), but it is an idea that has proven to work and should make F1 2012 an option for those moments when you’ve only got 30 minutes to spare before work/rest/play.

No doubt hardened drivers will be more interested in the likes of the adjustable brake bias, new penalty systems and isolated weather effects. It’s the latter that is most interesting and should prove to have the biggest impact on gameplay. 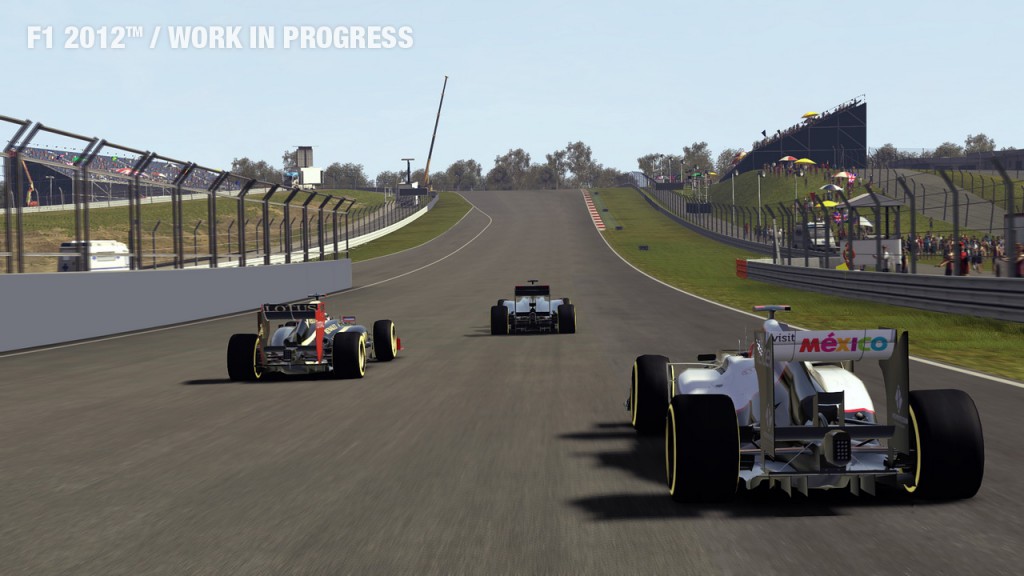 Rather than rain hitting the entire track, it’s now possible for only certain sections/corners/straights to be affected. As the weather rolls in rain could make a specific corner wet, while the rest of the track remains bone dry. The challenge then is to make your mind up and decide which gamble is the right one: do you stay on the dry tyres, hope that the rain clears up and simply take it very slow through that one corner? Or do you dive into the pits for wets and hope that the rain spreads across the rest of the track?

Your race engineer provides feedback on the weather situation and what the team believes is going to happen, but there’s no guarantee that they’re going to be right 100 per cent of the time. As with a lot of the tactical decisions in Formula 1, it’s a case of best guesses rather than absolute certainties.

So, something for everyone is the promise. The way Codemasters has gone about it does seem interesting and, given my affection for the sport and the series, I do want them to succeed. Here’s hoping it’s more Fernando Alonso than Felipe Massa. In truth, though, any kind of Ferrari quality would be fine.

Broken Sword: The Serpent’s Curse and the Art of Self-Publishing [Interview]

By Cameron Woolsey21 hours ago
Previews