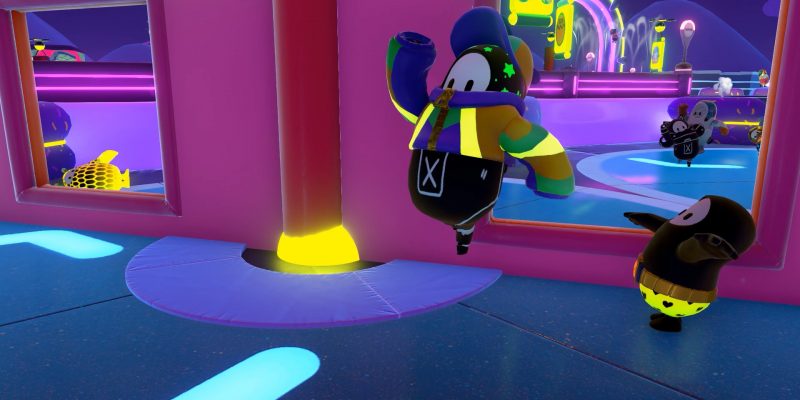 Fall Guys, meet Dave. The official Fall Guys: Ultimate Knockout Twitter account revealed today that the game’s Season 4.5 update is now live. For some reason, Mediatonic named the mid-season update Dave, but that’s not the only interesting part. The update brings a ton of new features, including cross-play, two new rounds, and much more.

The long list of patch notes revealed that Fall Guys Season 4.5 includes two new rounds. For starters, there’s The Slimescraper, where players must run across multiple floors to escape rising slime. Mediatonic revealed that this round is a “spiritual successor to Slime Climb.” Then, there’s the second new round, called Button Smashers, where “players are split into 1v1 dueling pairs.” The team with the most points wins. In addition to the new rounds, Season 4.5 brings 55 new variations in 12 rounds, “including low-gravity variants of Hex-a-gone and Thin Ice.”

Mediatonic also added some exciting new features this season. PC and PS4 players can now play together in matchmaking and custom lobbies. Plus, custom lobbies are “open to everyone, with an improved experience.”

In an attempt to catch cheaters, the developers have also implemented a new player reporting feature. To finish off the update, Fall Guys Season 4.5 also includes several bug fixes. The team made improvements to several areas, including Squads mode, Wall Guys, Door Dash, and the Store.

Reply if Dave
RT if Dave
Like if Dave pic.twitter.com/dZBhUmHnhk

Fall Guys in the future

For those who are just getting into the platform battle royale, Fall Guys is currently in its future-themed Season 4. The game entered the year 4041, featuring a ton of neon lights, techno music, and gravity-bending games. Now that we’re already into the mid-season update, Season 5 is sure to creep up on us. There’s no telling what Mediatonic has in store, but after a recent merge with Epic Games, Fall Guys will likely have some Fortnite-like features coming soon. Maybe they’ll finally tell us who Dave is.