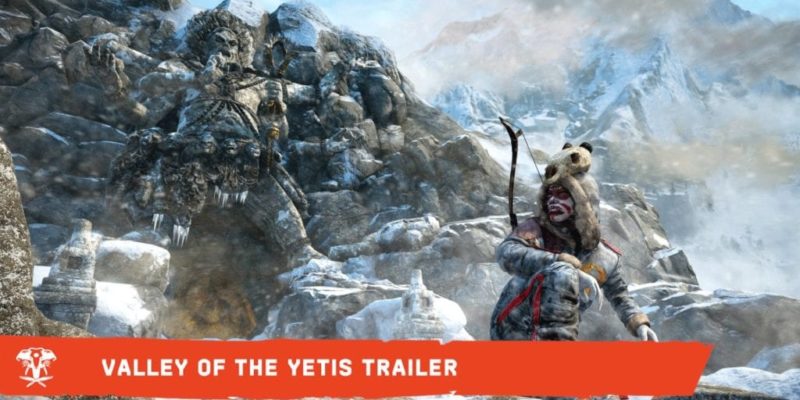 I asked Ubisoft whether this DLC was out and they told me “not yeti”. Valley of the Yetis is, however, coming out on 10 March and seems like it’ll add a new area to Far Cry 4.

An unfortunate helicopter crash will drop players (as Ajay) on a Himalayan ridge, inhabited by a weird cult and even weirder hairy monsters. You task will be to protect and upgrade your camp against intruders, and explore the frozen landscapes nearby.

Ubisoft bills this as a “new beautiful and majestic landscape of Kyrat at the top of the Himalayas.”

Once the main Valley of the Yetis camp is captured, it becomes your safe house. From this point, you need to fortify it (via side quests) and defend it against waves of attackers during the night. Co-op play is available throughout, and may even end up being necessary if some of those ‘waves’ are quite large.

This DLC is part of the Far Cry 4 Season Pass thingie, but will no doubt be available as a stand-alone purchase as well. I can’t seem to dig up what the price for this would be, but the $10-15 range is usually a safe bet. Hopefully it’s not too … abominable.

Here’s a Yetis trailer that tries to sell you a Far Cry 4 Season Pass at the end. Followed by a few images.