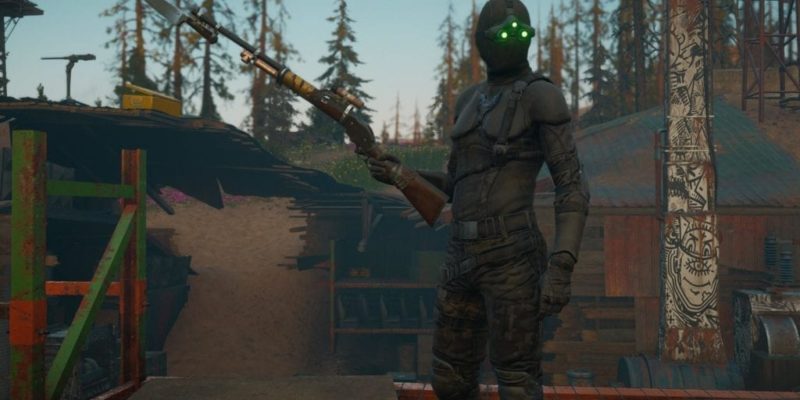 Expeditions are one of my favorite things in Far Cry: New Dawn, and an excellent little experiment in the open-world series. These are little standalone missions – which are both repeatable and randomized – that take you to locations outside of Hope County in search of materials. They’re also the only reliable way to get circuit boards required for crafting high-tier guns, so they have plenty of uses.

Other than the replayability due to randomization (they’re fairly large maps with multiple potential objective locations), they’re full of little bonus bits and pieces, and one of my favorite Easter eggs. That Easter egg is a lengthy series of nods to one of Ubisoft’s franchises that had better be getting a sequel sooner rather than later. 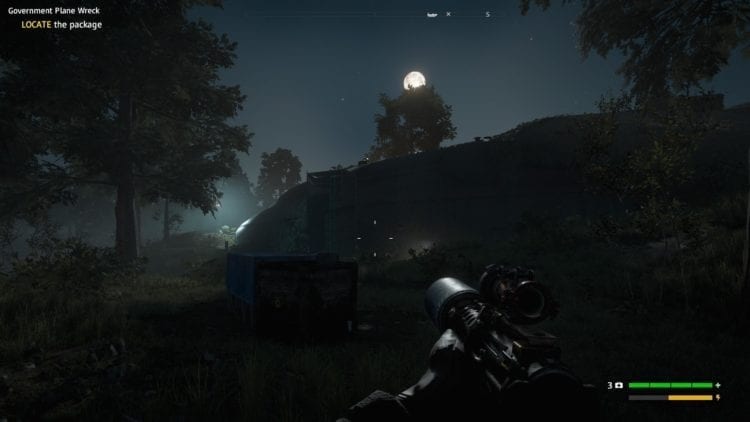 If you want to see this for yourself, and pick up a rather cool costume, then sign up for the Government Plane Wreck expedition which takes place in Iowa. You’ll probably want to pack stealthily. As with all expeditions, once the alarm is sounded there’ll be an infinite stream of reinforcements, and that tends to hinder any exploration.

Once you land, you want to make your way to a very particular section of the plane depicted above. The nose, I believe, although it can be hard to tell because I’m bad at planes. Note that this may or may not be the location of the package you have to retrieve: I found this on my second run at the Government Plane Wreck, and the package was there this time. The first time it was in an entirely different location. Either way, expect hostiles. 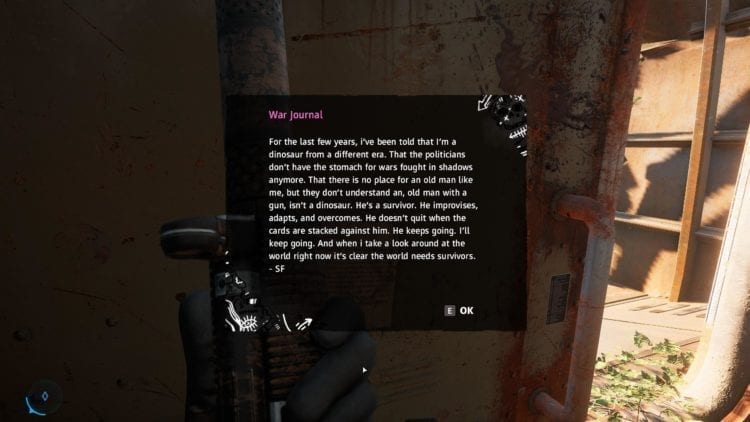 All around this expedition you’ll find notes from some chap called SF, who definitely isn’t Sam Fisher of Splinter Cell fame. These notes discuss the fall of various US cities; mention a stolen nuke being in Montana; and contain some talk about Briggs, Grim, and Kobin, as well as the mysterious SF trying to find an escape route for his or her daughter. Wait. Okay, no, SF is definitely Sam Fisher.

More than that: the government plane wreck is actually the wreck of the Paladin, the cargo plane Fisher and co. used as a mobile base of operations in Splinter Cell: Blacklist, and that game’s hub location. This becomes very clear when you use the laptop pictured below, located in the section to which I’ve directed you. 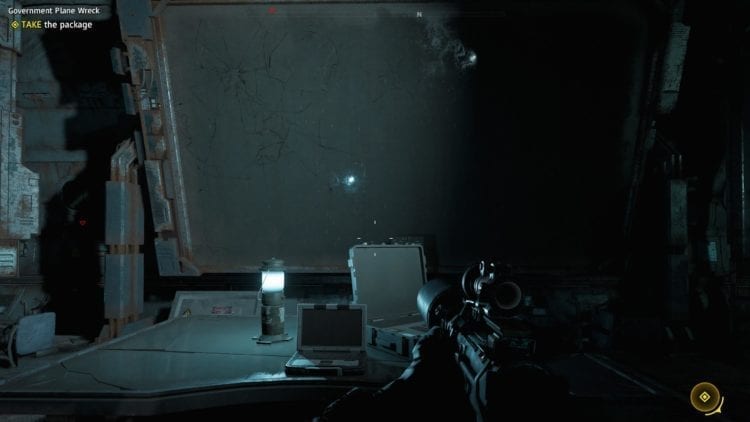 Activating it results in a special screen, which contextualizes the nuclear apocalypse of New Dawn a bit more: 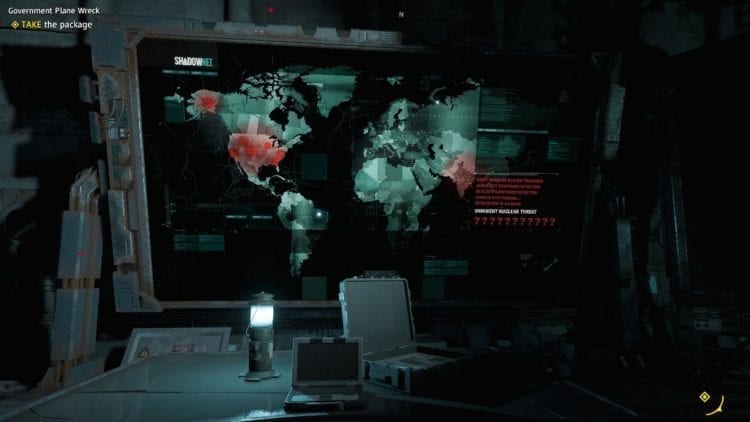 It also triggers a rather familiar sound off in the distance. Climb up to the rooms above the laptop, and a panel will have now slid open to reveal… 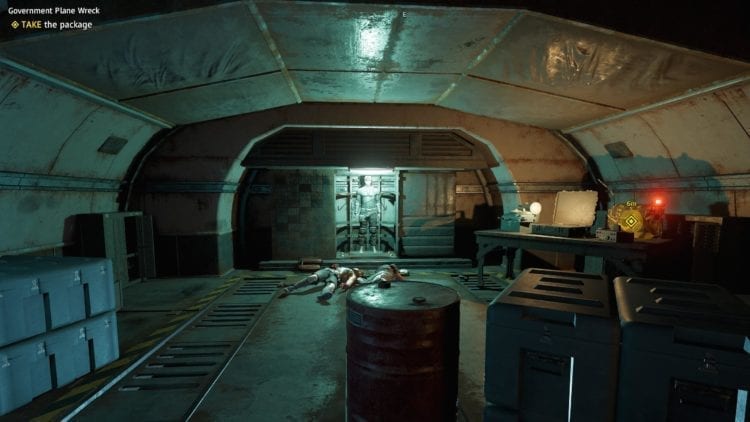 … Sam Fisher’s stealth suit, which you can take and wear. As if there was any doubt that this entire expedition is an overt reference to Splinter Cell, the costume isn’t named “stealth suit” or anything. It’s actually called “Sam Fisher.” If you somehow still had doubts, grabbing this outfit unlocks an achievement called Paladin’s Secret. 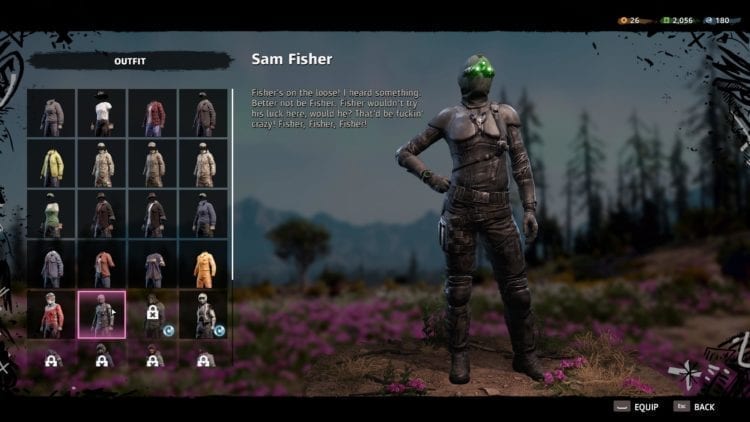 In a nice touch, you can actually see the familiar glowing green lights behind the panel if you make your way up there without having first activated the laptop. Either way, while it’s just a costume and doesn’t have any gameplay effect, this lets you do your stealthy murdering in more fitting attire. It also lets you take some screenshots that you can claim are leaked pictures from a new Splinter Cell game. 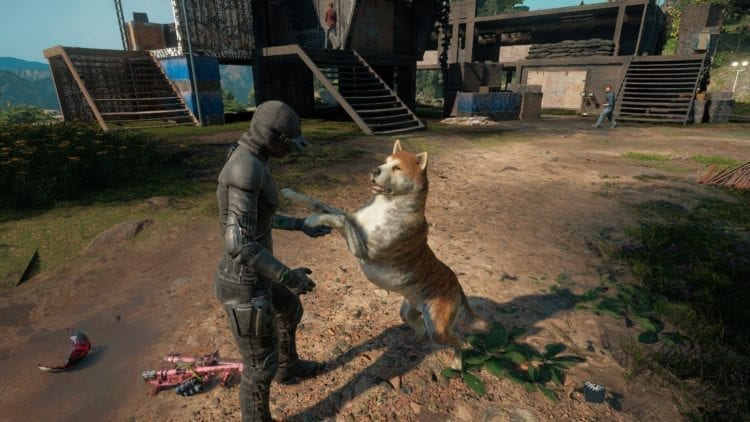 Exclusive: leaked screenshot of new Splinter Cell shows that Sam will be able to pet a GOOD BOI.

Ubisoft has a lengthy history of including Easter eggs that link their franchises. Assassin’s Creed: Origins made it clear that one of Aiden’s targets in Watch Dogs was an Abstergo employee, for instance. The biggest in-universe link comes from DLC missions for Ghost Recon: Wildlands which had the Ghosts teaming up with operators from Rainbow Six: Siege, though, although even this could be considered an extended cameo rather than confirmation that they exist in the same universe.

I don’t think we’ll ever get a game which makes it overtly clear that the franchises are linked. I doubt Sam Fisher will pop up as a character in Assassin’s Creed or The Division, or that Team Rainbow will end up raiding an Abstergo base in a forthcoming Siege season. Still, the fact that these nods are getting much more overt is at least food for a rabid fanbase to come up with their own crossover theories. With The Division, Far Cry: New Dawn, and Rainbow Six: Siege all focusing on apocalyptic threats, you don’t have to stretch too far to link them. 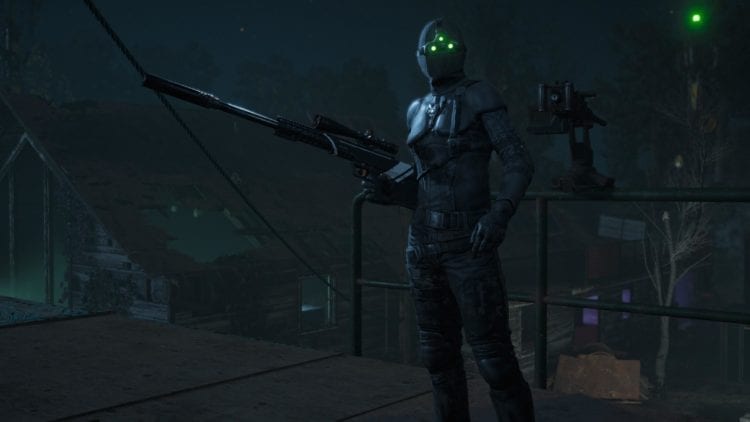