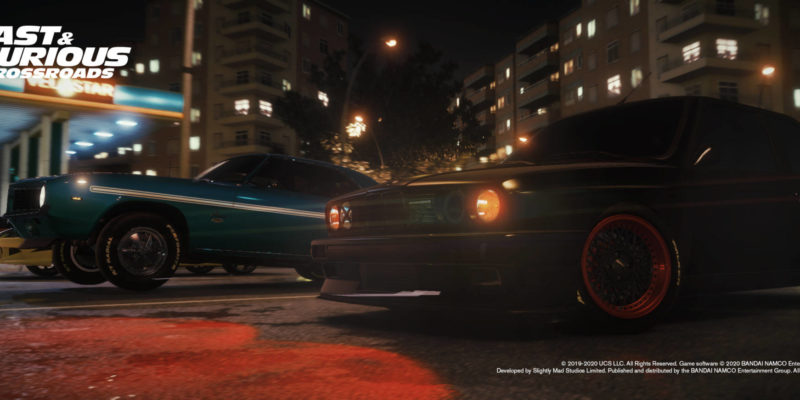 Hopefully, the moment of the announcement doesn’t turn out to be better than the game. Michelle Rodriguez and Vin Diesel were a serious hit talking about how much they love gaming. As Tim mentioned in our Liveblog of The Game Awards, the character models are a bit off. But then again, the game is all about fast cars and street racing. The people are just there to sit in the driver’s seat.

According to the Fast and Furious Crossroads official site, the game will be packed with speed heists, nonstop cinematic action, and adrenaline-fueled stunts in exotic locations. So, much like the films then.

But the game does look like it’s going to be pushing the action into a higher gear than the films (which is really saying something). Throughout the trailer, there are shots of cars kitted with weapons on their roofs. Things like harpoon guns and miniguns. I can’t wait to see what those get used for. There’s also the fastest tank I’ve ever seen spraying bullets at a car foolish enough to chase it. And explosions. Lots of explosions.

We’ve known for some time that Slightly Mad Studios has been working on an unannounced Hollywood blockbuster title. It was all but confirmed that the game was part of the Fast and Furious franchise when Ian Bell, CEO of the studio, dropped some incredibly unsubtle hints about what the title was. He said a character in the franchise was bald, like him, and went to the gym. Subtle Ian, really subtle.

Slightly Mad Studios already has some renowned racing games under its belt. The most widely acclaimed being Project CARS, but also two titles in the Need For Speed franchise. Based on the studio’s history, expectations are revving up for Fast and Furious Crossroads. All in all, the game feels like a natural addition to the franchise. But don’t buckle into the hype train just yet, fans will have to wait until May 2020 to get their hands on the game.