The Grand Cosmos, newly added in Final Fantasy XIV‘s patch 5.1, has quickly become one of my favorite dungeons. In fairness, this might be because I’ve run the other three level 80 dungeons about 900 times apiece, but it’s still beautiful, doesn’t drag on too long, and has some clever boss mechanics.

It’s those clever boss mechanics we’re here to talk about in this guide. Naturally, spoilers for each boss and how they work lie below, but… well, if you didn’t want to know that, you wouldn’t be here. Right? 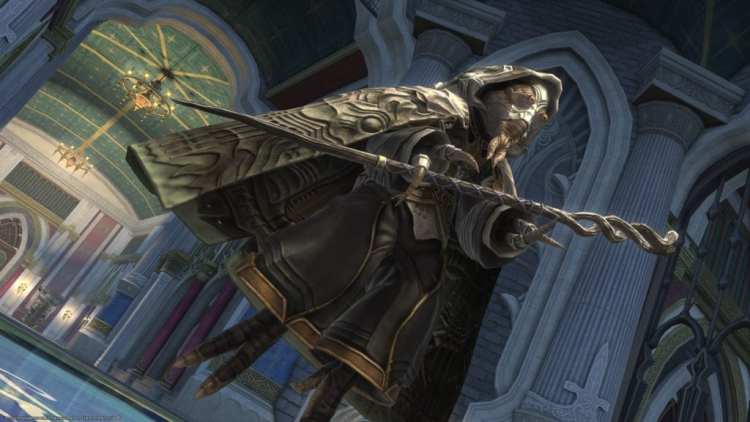 Shadowbolt – Tankbuster.
Immortal Anathema – Room-wide AoE, unavoidable damage.
Dark Pulse – Targeted AoE, party stacks to share damage.
Tribulation – Drops dangerous zones on the arena, which inflict Heavy and Bleed at the least. This also triggers the brooms.
Deep Clean – When a broom reaches a Tribulation area, it’ll Deep Clean. This is a point-blank AoE attack around it that does heavy damage and inflicts a stack of Vulnerability.

“Those hecking brooms” isn’t strictly an attack, but it’s the one bit of Seeker of Solitude that bears explaining. I’m certain you can handle the rest of this first Grand Cosmos boss on your own: heal and shield through tankbusters, stack up when you get a stack marker, and stay out of the danger zones. 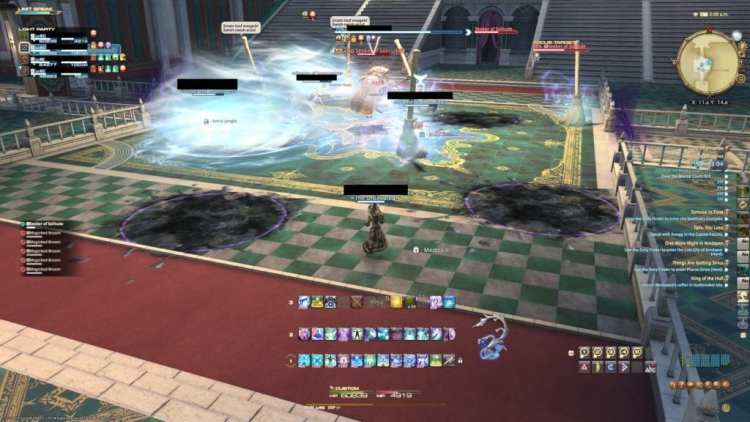 The floor stains are bad enough by themselves, but the big swirls from the cleaning brooms are the really dangerous part.

The brooms, however, come out to play after every cast of Tribulation. They move horizontally across the arena and will inflict damage and vulnerability should you touch them, as well as a bit of knockback. Because their movement is purely horizontal, they’re easy enough to dodge… with one exception. Deep Clean makes them pause for a few seconds, which can muck up your timing.

If you’re ranged, I’d suggest moving straight to one side of the arena so you can slip through the brooms on one side, and then worry about the oncoming set later. Every Tribulation cast adds more filth zones, which leaves you less room to work with, so just be careful you don’t get caught in the middle surrounded by incoming brooms and filth zones. If you can handle the brooms, though, then you should get through Seeker of Solitude easily. 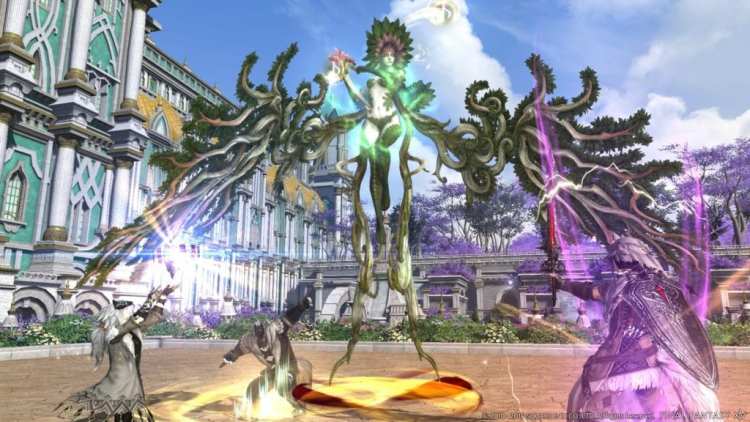 Storm of Color – Tankbuster.
Ode to Lost Love – Room-wide AoE, unavoidable damage.
Ode to Far Winds – Fixed AoEs appear on the ground, and targeted AoEs appear on each player.
Ode to Fallen Petals – Always follows Ode to Far Winds. Room-wide AoE, only safe area is under the boss.
Direct Seeding / Gardener’s Hymn – Makes green squares appear around the arena and throws seeds. If those seeds are on a green square when Gardener’s Hymn finishes casting, they will turn into adds that need to be dealt with immediately.

The second boss of the Grand Cosmos is this overgrown plant. The chief mechanic to focus on here is the Gardener’s Hymn one. Don’t get me wrong: Ode to Far Winds can be a pain to avoid (especially considering how few safe spots there are), but Gardener’s Hymn is the important one.

Basically, you can pick up the seeds and move them. As far as I can tell Leannan Sith is completely dormant while casting Gardener’s Hymn, so everyone can join in… or you can leave it up to a few people while others continue beating her up and maybe topping off everyone’s health. Your choice. 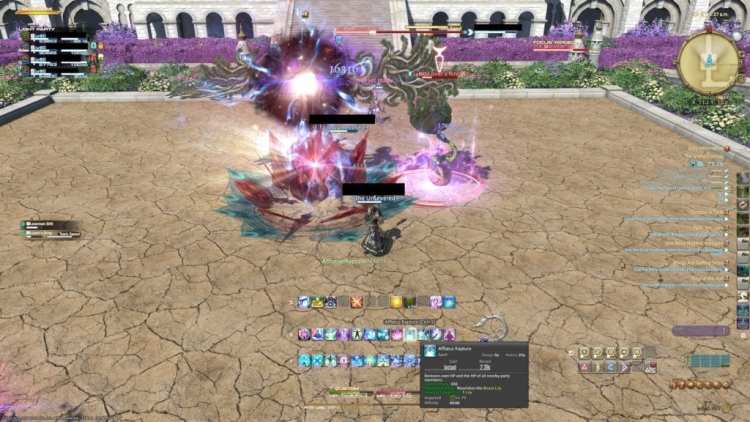 This is what you don’t want to see.

Every subsequent cast of Gardener’s Hymn gets a little more complex, though. An NPC off to the side will cast Ireful Wind, which knocks the seeds one square in a given direction. You’ll need to account for this when moving the seeds. (Also, if you’re holding a seed when Ireful Wind goes off, it seems like you drop it where you’re standing rather than having it move a square. Possibly useful to know.)

You should be able to avoid having any adds spawn, but one or two aren’t necessarily fatal as long as you kill them fast. They’ll charge up a cast that will hit the party with Slow and stacks of Poison, and this can get nasty fast. Rather than try to heal and Esuna through these, it’s considerably easier to just move the seeds. So, do that. Leannan Sith will go down pretty quickly, letting you move onto the final part of the Grand Cosmos. 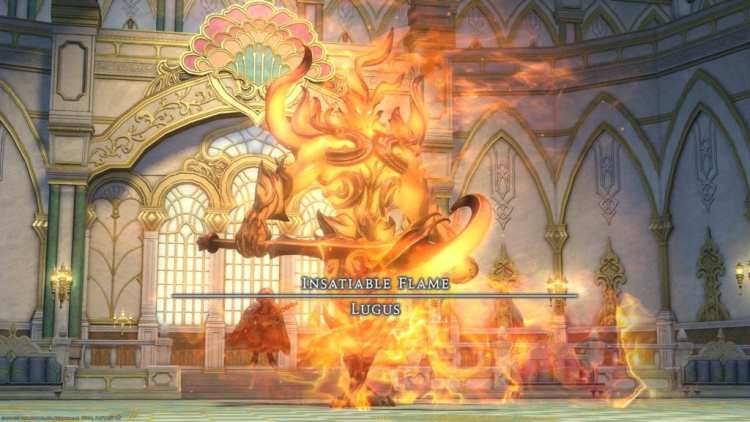 Scorching Right / Left – Hits the entire side of the arena to his right or left.
Captive Bolt – Tankbuster.
Fire’s Domain – Marks players. He’ll charge at them in order, inflicting damage to anyone in his path, and then perform a massive cone AoE behind the target before charging the next player.
Mortal Flame – Blue flame that strikes every player. Does more damage the longer it remains active. Can be passed onto scenery items.
Otherworldly Heat – Targets all players and marks a cross area beneath them when it hits. These areas will soon erupt into flame. Can set scenery items on fire.
Culling Blade – Room-wide AoE, drops more scenery items from the ceiling.

While the other bosses mostly had one mechanic to explain, there’s quite a bit to unpack when it comes to the Grand Cosmos’s final boss. Firstly and most obviously, don’t stand in Scorching Right or Left. Note that it’s Lugus‘ right or left, not yours. This can one-shot squishier party members, or at the very least drop them to a sliver of HP.

Fire’s Domain is easy to deal with. Split up, and after he charges you, move out of the way of the AoE cone. It’s dangerous to chase him around and try to DPS during this phase, if only because his charges do quite a bit of damage and it adds up. Ranged DPS, on the other hand, can go wild. 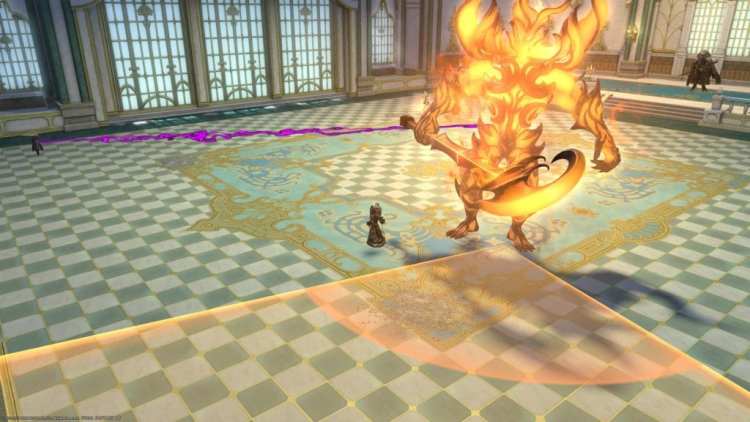 Let him charge you, walk out of the cone, and then try to avoid the next charge.

The tricky bit is Mortal Flame. When you entered the arena you probably noticed that the curtains, piano, chairs and the like appeared to have names and health bars. Mortal Flame is why. When you’re hit with this horrible blue flame, you must pass it onto a scenery item: It’s the only way to get rid of it, and the damage it inflicts ramps up quickly. (You should be able to just walk into items rather than actually “use” them.) Simple enough, and Culling Blade drops more scenery items.

The nasty part is that Otherworldly Heat can destroy scenery items. In short, when Otherworldly Heat is cast, get away from the scenery. And if a few scenery items get destroyed and you’re left with too few? Well, draw straws as to who gets to survive. I don’t think there’s any room for error there: While Lugus will only cast Mortal Flame a few times throughout the fight before dropping it from his rotation, I’m fairly sure there are exactly enough scenery items created to survive every Mortal Flame.

Lugus isn’t honestly too bad as these bosses go. He just requires a bit of foreknowledge, and messing up any of his mechanics can lead to a horrible death.

And that’s the Grand Cosmos dealt with. For more Final Fantasy XIV guides, have a look at our Shadowbringers guide hub.

Atelier Ryza – Quick tips to get you started

Friends ’til the end: Apex Legends will have duos for a limited time