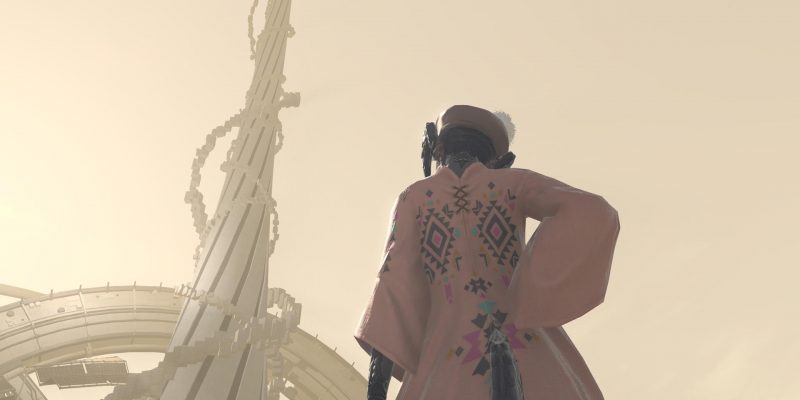 I’m going to have take a deep breath and steel myself here, because I think I’m about to annoy a lot of Final Fantasy XIV players (or, at least, Reddit). We’re going to talk about the Nier raids, compare them to the other Alliance Raids, and talk about what they do right and wrong. And no, the Ivalice raids aren’t perfect. Apologies for the upset that statement’s going to cause.

If it’s any consolation, the Nier raids aren’t perfect either — but I have to admit that they’re probably my favorite series of the Alliance Raids, despite some caveats. Fair warning: to discuss some of these elements I’m going to have to do some very light spoiling for Nier, Nier: Automata, the two Drakengard games worth mentioning, and (a bit more heavily) Final Fantasy XIV and the raids themselves.

Let’s start by quickly recapping the Alliance Raids so far. The (now mandatory) Crystal Tower raids are pretty much a Final Fantasy III crossover series, and while they’re fairly neat, they’re a bit of a slog now that everyone’s hilariously overgeared. It also doesn’t help that dropping back to level 50 means that you’re missing out on most of your class abilities, so there’s not that much to do. Still, they tie into the main game’s plot heavily, so bonus points there.

Heavensward‘s Shadow of Mhach wasn’t a crossover, but it had plenty of familiar Final Fantasy faces. Deathgaze, Diabolos, Califisteri, and the dreaded Ozma all show up here, and there are some fun (and cruel) mechanics even now. How much you like its plotting will probably depend on your tolerance for sky pirates and Voidsent lore, but it’s honestly enjoyable enough just for Cait Sith.

And then there’s Return to Ivalice, which is sufficiently (and at least slightly ironically) beloved that Ivalice raiders are a meme. If you like Final Fantasy Tactics and, to a lesser extent, Final Fantasy XII, you will likely adore Ivalice. If you want well-crafted raids, you will likely adore Ivalice. The three Ivalice raids are really good. Boss design, visual spectacle, and a general sense of being involved in truly titanic battles are all ramped up to 100 here.

Yes, Return to Ivalice is good

I’ll also give it a good amount of credit for tying Ivalice into Final Fantasy XIV‘s world and lore, both with it being a mythical region in Hydaelyn, and having ties to the origins of Garlemald. Personally, I have some difficulty thinking of that as hard canon, but hey. Efforts were made, and it’s not likely to impact the greater storyline. 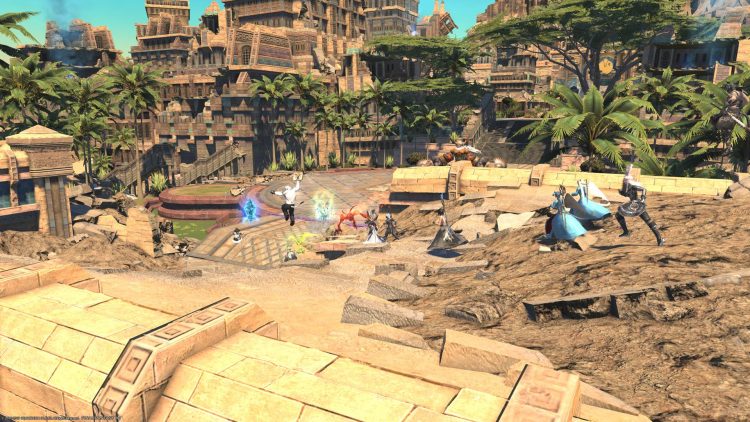 Yes, yes, Return to Ivalice is gorgeous and wonderful and generally really good.

My biggest problem with the Return to Ivalice raid series lies outside of the raids themselves. The characters you interact with are mostly either “dull” or “annoying jerks”; Ramza, in particular, is in the latter camp. There’s a lot of fluff and filler in these sidequests, and not a huge amount of character development. The bits with Auracites and the lost region are interesting! Going on a very lengthy fetch quest for a bottle of wine is not, despite the quest name being a Seal reference.

But, for the most part, I can give this a pass. The raids themselves are excellent: they’re challenging even now, and have plenty of interesting and unique mechanics. There are loads of great references to Tactics. But without foreknowledge of it, most of the actually plotting is a touch dull, with some of the more important parts glossed over, and Ramza is a prick. Still, fanservice galore, and again: the actual raids are great.

So then we come to Shadowbringers and YoRHa: Dark Apocalypse, or “the Nier raids.” Considering that Final Fantasy XIV had some difficulty implementing interesting characters and storylines from one of the most beloved entries in the franchise, and considering that was a fantasy world? Well, Nier: Automata seems like kind of a tough ask. While FFXIV has some AIs and the like thanks to the Allagans, sci-fi android ninjas are a little outside that — which is why I’m surprised it actually works pretty well. 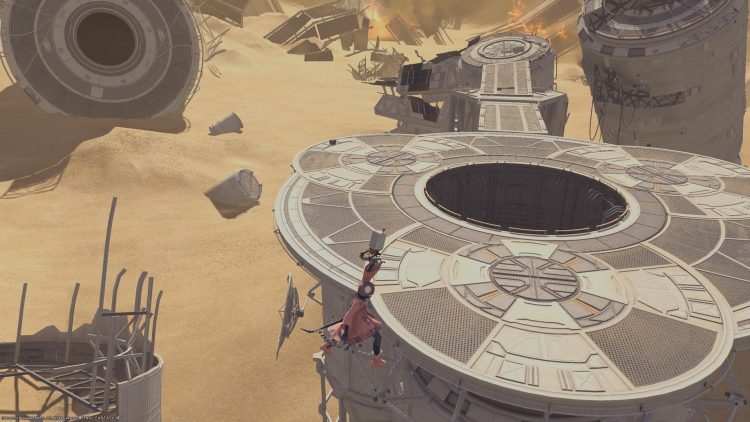 On balance, I think there are two reasons for this. One is that Shadowbringers takes place in the First, so we’re already in an alternate world, and weirder concepts can be included without necessarily infringing on the “standard” lore too heavily. This is the same reason I don’t feel the Omega raids are out of place, despite summoning bosses from other Final Fantasy games. It’s a trans-dimensional robot: it’s kind of outside of the scope of the lore to begin with. The same applies with Nier, albeit to a lesser extent.

The other, more important reason, is that the Nier stuff isn’t really the crux of the story. It’s not about 2B or 9S or any of the other guest stars. It’s about Anogg and Konogg, a pair of comic relief dwarves who — because this was written by Yoko Taro, a man who has declared war on positive emotions — go through hell and get incredibly broken.

Anogg and Konogg start off by leaning heavily on the fourth wall. They’re the black sheep of their particular village, and they drag you into the questline by noting (correctly) that you’re an adventurer and therefore you’ll do whatever insane task they demand. They wind up discovering a white-clad android, 2P, who leads them to the Copied Factory: the first of the Nier raids, and an industrial complex full of really angry robots. And regardless of all the dangers, they’re delighted to investigate this. 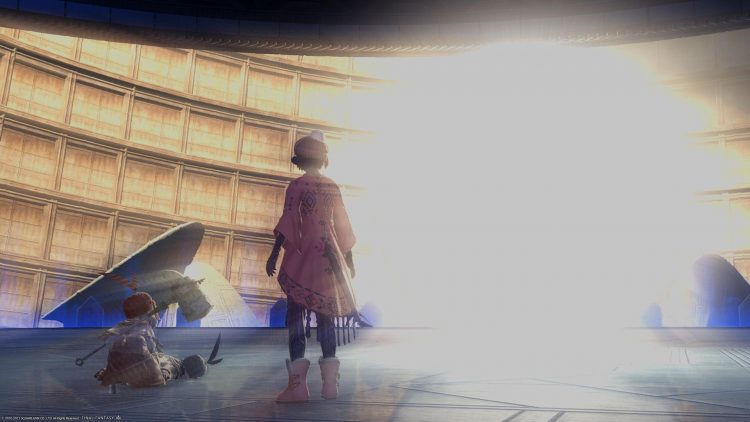 Then things go horribly wrong, because Yoko Taro. Their village is attacked, and they’re blamed and shunned even harder than ever before (resulting in more than a little guilt and trauma for the pair), and that lighthearted tone falls like a meteor.

This is the stuff that makes the Nier raid series work. To repeat myself for emphasis: for the most part, it’s not really about 2B or 2P or the androids or the machines. It’s about Anogg and Konogg, and their relationship with each other and the dwarves. The Nier stuff is just the backdrop.

Not everyone’s going to like them or their arc. But to my mind, giving me characters outside of the guest stars — characters that relate to the world I’m in, and who I can care about — is the way to go.

Naturally, there’s plenty of fanservice for those who love Yoko Taro’s work. Bosses, visuals, and music (spoiler warning for the last boss, for that link) are pulled from across his oeuvre. While Nier: Automata is the draw (and the focus of the first two raids), bosses from Nier show up, alongside the Seeds of Destruction from Drakengard and a final boss that heavily references the infamous climactic battles of Drakengard and Drakengard 3. Even the Knave of Hearts pops up.

Where the Nier raids stumble is in making this relevant to anyone not familiar with his work. The Seeds of Destruction, the Red Girls, and other critical elements aren’t really given much in the way of explanation. Still, even for the unfamiliar, it’s undeniably cool to get pulled into strange little hacking minigames, or experience the bullet hell nature of some of the Nier fights in Final Fantasy XIV battles.

And in fairness, that lack of explanation isn’t exactly unique to this raid series. Pretty much every Yoko Taro game has its share of “what the hell is going on” moments, leaving plenty of things up to interpretation. It’s just that YoRHa: Dark Apocalypse doesn’t really give much context for this at all.

What I do find interesting is that, while the general consensus online seems to be that the Ivalice raids are the best thing ever and the Nier raids are confusing and don’t fit into Final Fantasy XIV… that’s not the case for anyone I’ve actually spoken to. It was a small sample size of around a half-dozen people, but hey.

Three people unfamiliar with either Tactics or Nier thought the Nier storyline worked out better than Ivalice and that the raids were more entertaining, with one outright saying that the Nier stuff was their favorite content in the game. One person familiar with Tactics but not Nier thought the same, calling Return to Ivalice’s intermission quests “a slog.” Only one person of those I spoke to — a huge fan of Tactics who was unfamiliar with Nier — thought the Return to Ivalice raid series was significantly better, stating that the Nier raid series was “low-effort fanservice” and “boring.” 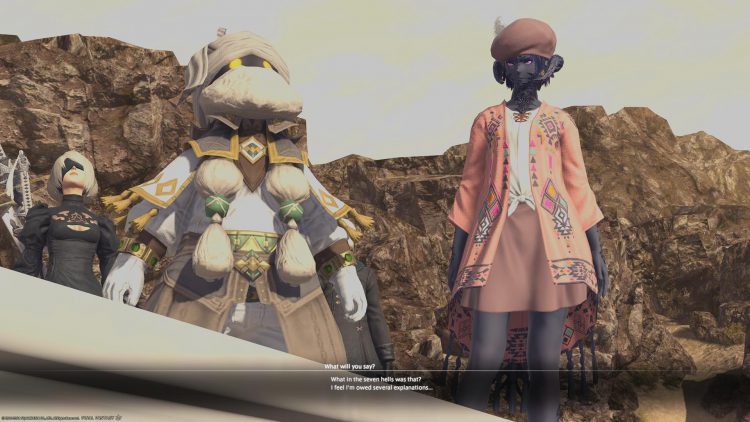 The players’ thoughts, transposed directly into the game.

Everything is subjective, and nobody’s wrong (although “low-effort” seems like a stretch). Personally, though? I’d rather go through the Nier raids again, and I kinda hope that future crossover content follows its footsteps in a few ways. It gives us a way to relate and something to care about which isn’t predicated on knowing the source material, as with Anogg and Konogg.

We’ll hopefully learn more about Endwalker‘s Alliance Raid series during the Fan Festival this weekend. So far, we know that it’s not a crossover raid, but it is called Pandaemonium, which was the castle from Hell in Final Fantasy II that was usurped by the Emperor. It also looks like it’ll involve Lahabrea, so who knows — maybe we’ll be facing off with that unsundered Ascian once again, back from the dead. Or possibly while dead. Castle from Hell, after all.

Also, I accidentally interviewed Naoki Yoshida, if you’re interested in that.

Destiny 2: Season of the Splicer review — Hacking the network