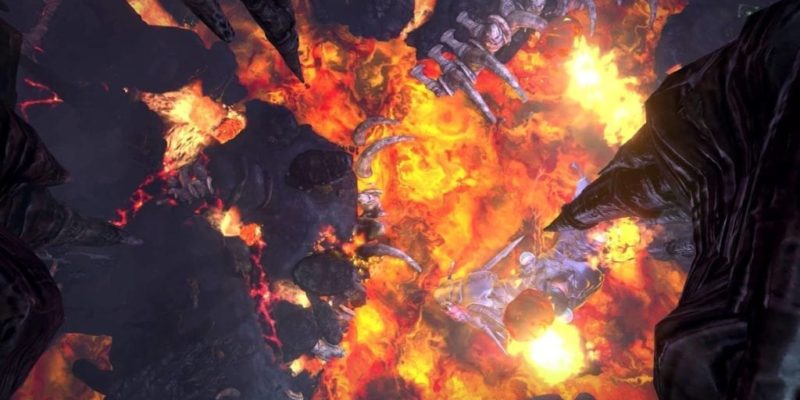 Firefall is just about one week away from its highly anticipated launch. The developer, Red 5 Studios, is comprised of former veterans of the industry and has been polishing the first/third-person-shooter-MMO gem for quite some time. Now, that title has finally reached fruition, chugging along towards its July 29, 2014 release date.

To celebrate the near launch of the game, the studio has revealed an impressive trailer surrounding its Titan Battles. Players will be happy to know that the large-scale fight will not be done with a sole gun-blazin’. The instances occur with 20-player suites and both promise to have unique experiences though these occurrences.

Here is a low down of each Titan you will encounter if your squad is up for the battle.

Baneclaw
Baneclaw is a scarab which has been mutated by the Melding and has grown to a massive size. Once the second stage of the Devil’s Tusk Medling pushback has been completed, players unlock the ability to take on this terrifying and unforgiving Titan. Baneclaw will unleash targeted attacks and numerous hellclaw minions will keep players on their toes as the Titan rolls violently in and out of the arena.

Kanaloa
The second Melding Titan, who is also unlocked upon completion of the second stage of the Devil’s Tusk pushback, is known as Kanaloa the Destroyer. Kanaloa is a melded lava worm, living within the confines of the Devil’s Tusk volcano, Kanaloa waits to ignite any intruders to its lava filled nest. The lair is littered with elevated platforms that provide ample vantage points for players to rain down fire on the titan at its center. As the fight progresses, the lava will rise, taking away more and more floor space until eventually, those tall isolated platforms are the only refuge you have left from the deadly molten pool below. The thick skin that makes Kanaloa impervious to the intense heat of its home also makes it extremely resilient to most weapons. Players will need to aim at the elusive weak spots to do damage, while they maneuver to avoid falling in the lava and dodge Kanaloa’s devastating flame-based attacks.

Although the game is based on a F2P model, there is early access for those willing to pay. FireFall is slated for a July 29, 2014 launch on PC. Feel free to click here for the official site. For purchasing details, click here.