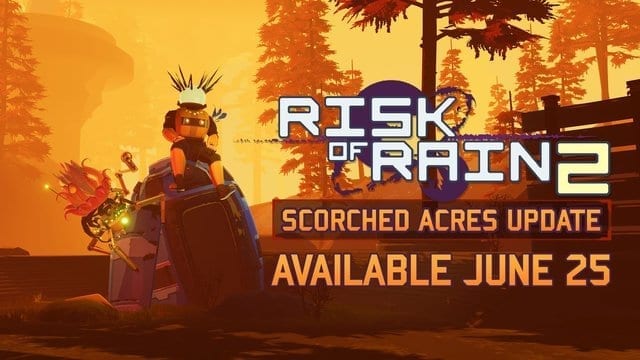 Risk of Rain 2 entered Early Access on Steam in late March. By May 3 it had already sold one million copies. As we reported in April, the game already has very impressive mod support, with a lot of variety and depth. If that wasn’t enough, Hopoo Games announced on Twitter that the first content update will release this week, on June 25. Scorched Acres is the name of the update, and though the Twitter post doesn’t include details, the studio did release an Early Access forecast in late April that might hint at what’s coming. 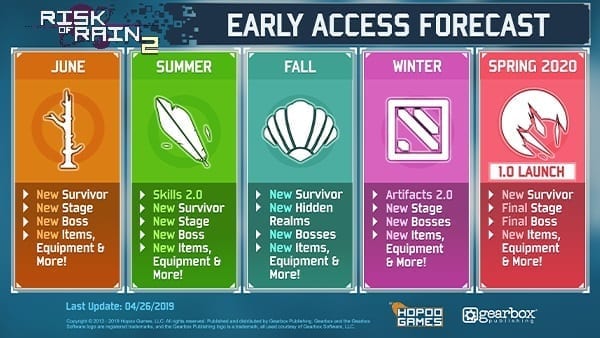 According to this roadmap, players can expect a new Survivor, Stage, Boss, and obviously plenty of new items and equipment. Our guide on how to unlock every Risk of Rain 2 character might need an update, but it’s still a good starting point for new players.

Hopoo Games has been hard at work since the initial Early Access release. The first patch came out last month, and apart from adding full localization support for ten languages, it included several important bug fixes, such as when monsters no longer spawned late in the game, as well as some issues with the pinging system. The Scorched Acres content update is very likely to include more bug fixes.

I haven’t had the chance to try Risk of Rain 2 yet, but based on the previews I’ve read and the general Steam review score, it looks like it’s shaping up to be an excellent third-person shooter roguelike with a lot of replay value. Even in Early Access, it already looks sturdy enough to engage players, and it will probably improve a lot by the time the Spring 2020 release comes.

Have you tried Risk of Rain 2 yet? What are your impressions so far? Is it more fun with friends? Leave your comments below.

Bloodstained: Ritual of the Night – Stuck in your attack animation? No need to reload

By Michael Feghali28 mins ago
Hardware