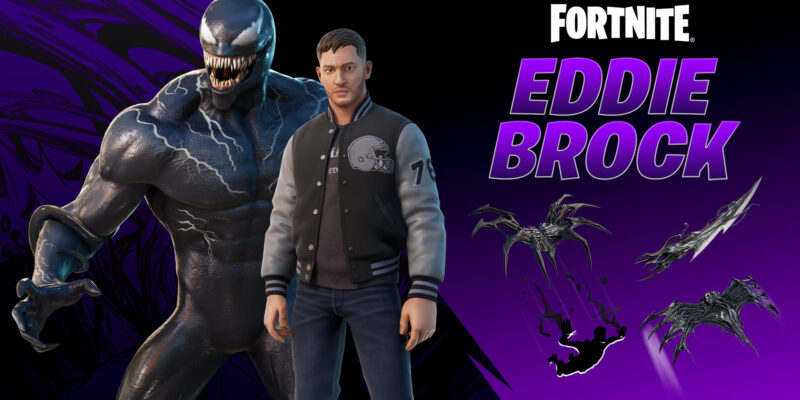 With the arrival of Fortnite Season 8 came a range of new content. This includes new NPCs, the addition of The Sideways, donation boards allowing players to vote on in-game changes, and more. However, Epic Games appears to be continuing their pattern of adding new crossovers into the battle royale. Already, the Carnage skin has made its way into the Season 8 battle pass. In order to unlock the Carnage skin and accessories, you must reach page 10. As soon as the Carnage skin arrived, it felt like a matter of time before another Venom skin made its way into Fortnite. We did not have to wait long for that to happen, as the Venom and Eddie Brock skin has been added to the Fortnite in-game store.

Previously, a Venom skin was already released for Fortnite. The new skin is based on the upcoming film, Venom: Let There Be Carnage. However, the Eddie Brock outfit allows you to experience the human side of the character. Then, you can activate the Venom Unleashed emote to transform into Venom. Notably, if you prefer to begin the match as Venom, you can select the skin from your locker.

Fortnite is not short of Venom cosmetics

The Eddie Brock outfit is available individually or as a part of the Venom bundle. The bundle also features cosmetics such as the Symbiote Scythe pickaxe and returning Venom items. Therefore, if you already own items from a previous Venom bundle, the new bundle will be available to you at a lower cost.

The Fortnite Eddie Brock and Venom crossover will definitely be welcomed by fans of the superhero. It will be interesting to see what crossovers Epic Games has in store for us next. In the meantime, you can fight opponents around the island switching between Eddie Brock and Venom, in the leadup to Venom: Let There Be Carnage.