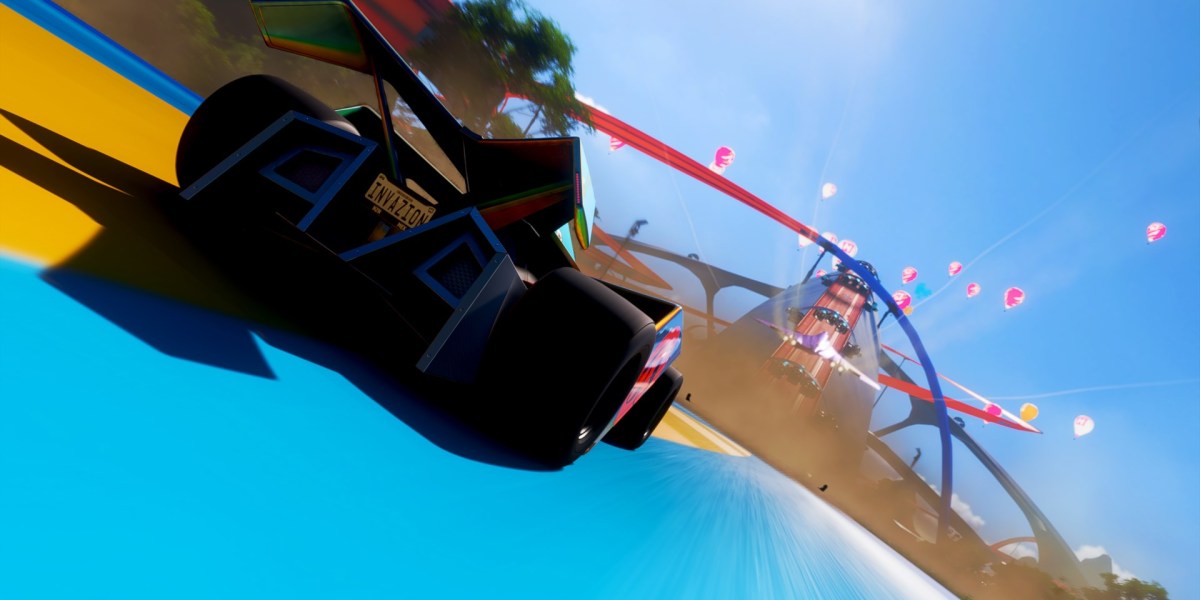 Yes! I don’t normally open a piece like this with such a direct answer, but without a doubt the Forza Horizon 5: Hot Wheels expansion is easily one of the best experiences I’ve had with a racing title. The base game blew me away when it first released, and Playground has taken the momentum of Forza Horizon 5‘s stellar launch and ran with it for this first expansion.

Though relatively short in terms of campaign content, Forza Horizon 5: Hot Wheels feels far grander than it really is thanks to its beautiful new map, which has been crafted with notable care and attention to detail. As if the craziness of the Forza Horizon franchise needed to go any higher, it has now effectively hit the stratosphere.

The thing that sets this expansion apart from the typical Horizon experience is the fact that it actually follows a system of linear progression. The series has long abandoned this more traditional format in favor of simply allowing players to choose their own experience and progress however they see fit. While this has made playing a typical Forza Horizon title more liberating than your usual racer, some folks have criticized the format for feeling a bit too free and aimless.

Thus, on the other hand, the Hot Wheels expansion has you start with slower car classes (B) and work your way up the ranks to more powerful vehicles. Playground put this system in place for the sake of accessibility. Though there are a lot of adult Hot Wheels fans (I admit nothing), this expansion keeps in the mind the kids that will naturally be all over it. As a result, it was built in a way where the action would progressively get faster and more challenging in order to help ease each player into the experience.

Frankly, it nails this execution. The experience of driving through the twists, turns, and loops of Hot Wheels Park feels legitimately different in an S2 car (the penultimate class) than it does in a starter B class vehicle. This gradual shift into higher gears allows you to get well acquainted with the vast track network of Hot Wheels Park and its many elements.

Each of the main 18 races makes use of every inch of the park. Even the more casual moments of driving to get to a new mission feel like their own thrill ride. That said, the physics are more refined compared to the previous Hot Wheels-themed expansion from Forza Horizon 3.

Cars stay planted onto the slick tracks rather nicely, and the way the whole network flows is efficiently progressive. You’re never just thrusted into a section that’s too extreme. Like a well-built rollercoaster, the tracks have incredibly intense sections, but they’re spread out between tamer sections that give you a chance to prepare and recover.

This flow is especially crucial in the higher-speed races of the S1 and S2 classes where being able to plan for tighter turns in the distance is essential in order to not slam into the barriers.

One thing I didn’t expect to love is that, though quite scant, there are some “off-track” sections of the map. One particular race, the Canyon’s Drop Hazard Sprint, takes place almost entirely on the terrain of Giant’s Canyon. More reminiscent to a regular Horizon race, it felt just as exhilarating as the other Hot Wheels races thanks to the towering network of tracks looming in the above, functioning here more as a beautiful, atmospheric set piece. That said, this particular race was just well designed in general, and is a great example of how much thought both the scenery designers and engineers put into the overall makeup of Hot Wheels Park.

From its environmental tracks to the speed-hampering rumble strips and wildly gravity-producing corkscrews, each mile of Hot Wheels Park feels well-built and believable.

Island paradise in the sky

Playground’s approach to fitting such a complex creation like Hot Wheels Park into the overall Forza Horizon lore was simply to continue with the now default explanation that the in-universe Horizon company has a lot of money to throw around. After all, this is the same company that dropped a Ford Bronco out of a cargo plane and then raced it down the side of an active volcano. So, building a floating archipelago complete with distinct biomes just makes sense, somehow.

That said, as I drove around the vast web of bright orange tracks, I couldn’t help but admire its architectural wonder. Support beams are carefully and meticulously placed everywhere, furthering the belief that this world could exist—aside from the floating islands, of course.

Still, the fact that each biome is its own floating island only adds to the slickness of the whole package.

For instance, it’s immensely satisfying to plummet down a vertical drop from the central Horizon Nexus location to then go over an intense incline and find yourself drenched in the spray of three massive waterfalls in Forest Falls. Then there’s the wicked loops of the Ice Cauldrons and the inverted straights of Giant’s Canyon that essentially have you driving alongside the walls of the massive rock formations. The attention to detail truly adds to the expansion’s production value. Rocketing in, out, and around each biome is both visually stunning and mechanically smooth. Traversing the map in any Horizon title is often a joy due to the scope and beauty that each have had to offer. Hot Wheels Park is no different, though its futuristic design makes it quite unique.

In order to properly dress up an aerial landscape such as this, the developers implemented a new global illumination solution, and it shows rather handsomely. Sitting 50 miles in the air, the whole area is drenched in sunlight.

The massive structures of the track network, along with the larger-than-life fixtures like the giant trees in Forest Falls and tall canyon walls of Giant’s Canyon, create a beautiful array of lights. Sunlight blasting through the openings of covered areas such as caverns, tunnels and caves, and the ambient sounds created by the subtle bellows of wind and vibrations that emanate off of the tallest structures further push the satisfying complexity of the expansion’s presentation.

The iconic bright, reflective paint of the Hot Wheels tracks constantly sparkles in the sunlight, creating intense flashes of lens flare, and vehicles are also constantly glistening. Even at night, the whole park retains its beauty thanks to a wide array of colorful neon lights and fireworks brightening up the whole landmass.

Beat this, beat you, beat that!

From the opening moments of the Hot Wheels expansion, Hayley, the director of the in-universe Horizon Festival, infectiously geeks out over Hot Wheels Park. On that note, the introductory race alone drums up a level of wild excitement that matches, if not exceeds, the amazing intro race of Forza Horizon 5 itself. Hayley’s excitement feels quite genuine, and it sets just the right tone for the rest of the experience that this expansion has to offer.

In many ways Forza Horizon 5: Hot Wheels feels more like its own, standalone experience than an expansion to the main game. The way progression works by making you use your car roster in a far more linear way and the flow of the track network and its many elements makes me believe this could have been its own game.

Honestly, I’m not even sure if the game’s second expansion will surprise me as much as this one did. Of course, Forza Horizon doesn’t have to become a new take on Hot Wheels as a whole, but this experience does make me quite giddy over the idea of a more full-scale title.

All things considered, as a $19.99 USD standalone purchase, this is easily the wildest, largest, and most ambitious expansion to grace the Forza Horizon franchise to date. It makes Horizon 3’s offering seem like a prototype by comparison. This is the production model, and boy can she drive.

Batman is ‘really dead’ in Gotham Knights, and the Joker will be a no show