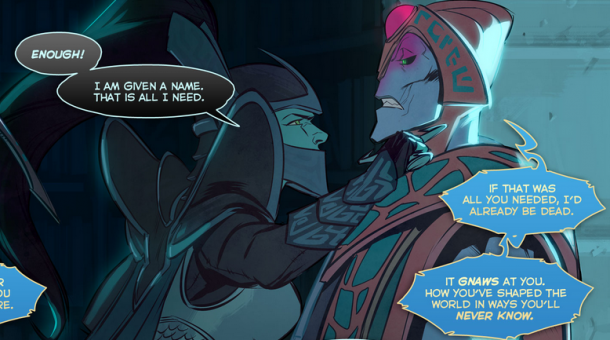 Valve have uploaded a free comic, called The Foreseer’s Contract, to the Dota 2 website – and I use this to foretell Oracle joining the roster soon. Not least because the update’s web address is “www.dota2.com/oracle“.

This comic, which features Phantom Assassin being distracted from her mission to murder (sorry: “assassinate”) Oracle and possibly taking a new contract from him – to kill everyone that could pose a threat to him, with a big glowing magical sword – is a pretty good hint that Oracle will be having some sort of impact on gameplay soon. Considering he’s one of the heroes from Dota 1 who has yet to be added to Dota 2, it seems quite likely that his impact on gameplay will be “turning up in every single sodding pub game for the next month.”

This is “Day One” of the update, and the related blog post states that we should “come back next week to learn more”, so there’s more to learn yet. It could be that this comic will (in the vein of some of the Team Fortress 2 comics) be continued next week. It’s possible that this is hinting at nothing more than Oracle being added to Dota 2. It’s possible that “The Foreseer’s Contract” is going to be a major in-game event, à la Diretide or Frostivus, since the blog post is called “The Foreseer’s Contract is coming.” I have no idea which of these it’ll be, but I’d be surprised if Oracle doesn’t wind up as a playable hero sometime soon.

I’ll go into details on how Oracle actually works when and if we have confirmation that he’s joining the fight. Until then, go and read the comic, and then check back next week for more details. For now, I’m mostly just happy to see Dota 2 getting some comics. There’s some fascinating lore in there, and the Team Fortress 2 comics are fantastic.