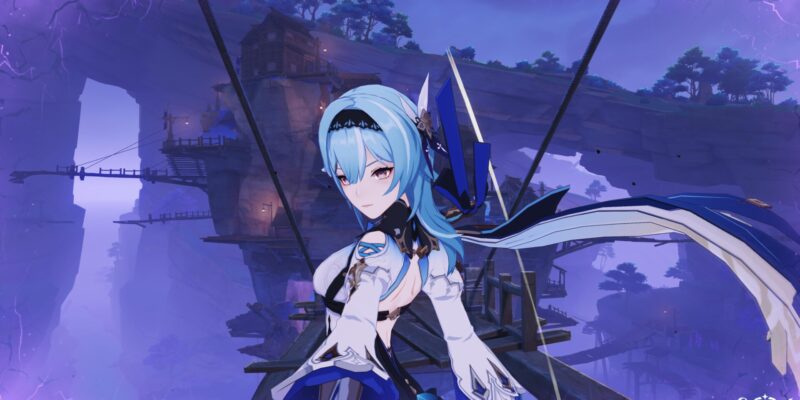 While you’re doing the Tatara Tales quest in Genshin Impact, you’ll be able to destroy rifts by using the Kamuijima Cannons. Doing so will reveal new areas for you to explore, entire villages that were once trapped inside a barrier. These places have more goodies and rewards (Tatarasuna alone has no less than four Electroculi for you to grab). Additionally, you’ll be able to collect curious items known as “Keys to Some Place,” eventually unlocking a chamber that has a 4-star claymore blueprint. Here’s our Genshin Impact Katsuragikiri Nagamasa guide to help you obtain the blueprint for this weapon.

Note: For more information about the game, check out our Genshin Impact guides and features hub, as well as our overview for the version 2.0 update. Likewise, you can take a look at our main guide for the Tatara Tales questline.

Genshin Impact Katsuragikiri Nagamasa guide: Keys to Some Place and the claymore blueprint

The “Keys to Some Place” are found inside nondescript, common chests (you wouldn’t even know that they’re holding something special). You can start looking for these as soon as you destroy the rifts with the cannons. However, I would suggest waiting until you’ve got the “Priority Investigation” quest from Xavier. The tasks there will actually lead you close to some of these spots.

Note: Remember that the Balethunder effects are active in these areas. Your health will be drained unless you can get the Thunder Bough/Electrograna buff. 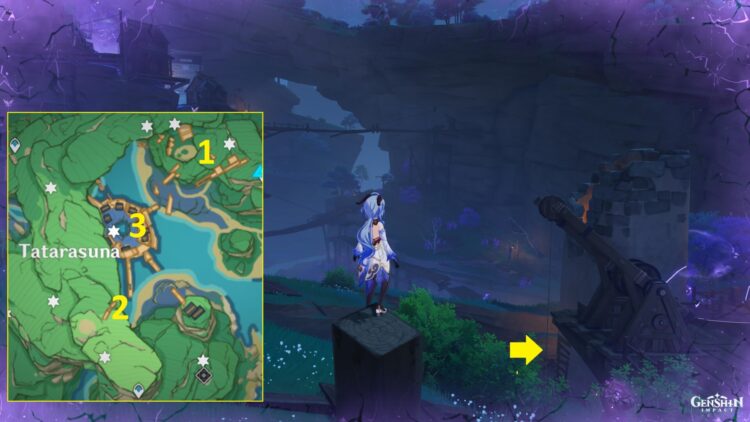 This one can be found in a village in the northern section of Tatarasuna (close to the Statue of the Seven). The image above shows how things look like when you approach the village.

The goal here is to go to the lower area of the tower by picking up the Electrograna buff. Inside the ruined tower, you’ll find a chest with the key. Below this level, you’ll find a spot where you’d need to place the beacon for the “Priority Investigation” quest. 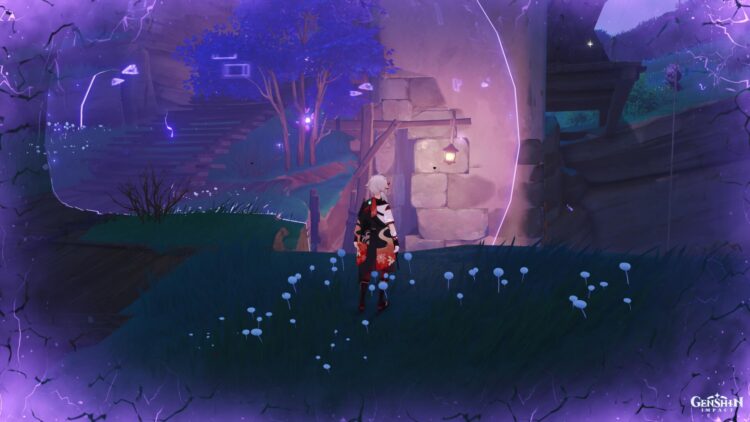 For the second key, you should have unlocked the southernmost fast travel point in the region. Make your way to the cliff overlooking Tatarasuna and glide down.

You should see a platform with the chest, a wooden bridge, and the Mikage Furnace in the distance. Oh, and down below, near the river, is the location of the weapon blueprint itself. We’ll talk about that in a short while. 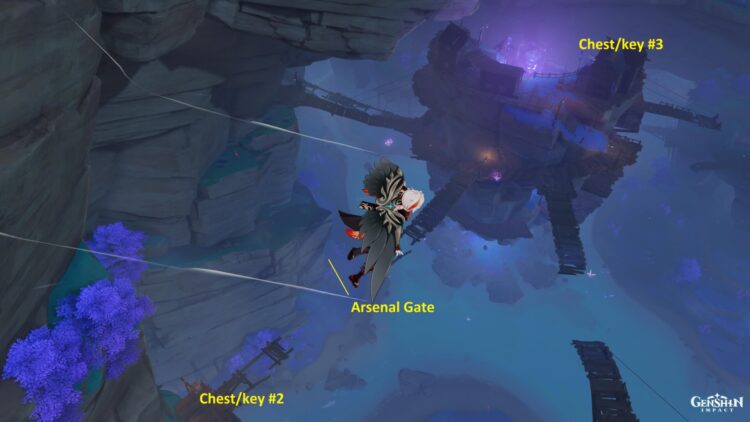 The third key for Genshin Impact‘s Katsuragikiri Nagamasa can be found near Tatarasuna’s Mikage Furnace. You’ll want to use the previous fast travel point at the southern cliffs. Get closer to Tatarasuna and glide until you reach the roof of one of the houses which has a chest. 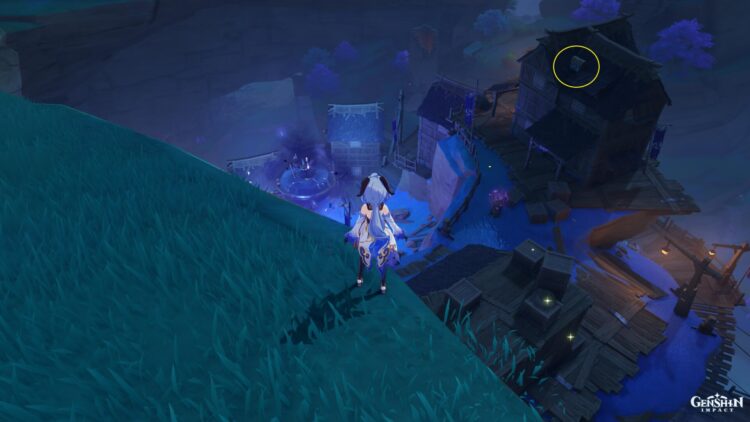 Arsenal Gate and the blueprint

As mentioned earlier, the chamber that has the blueprint is right below near the river. Jump down and look for the Arsenal Gate.

Use the three keys that you’ve obtained to open it and fight the Ruin Sentinels that spawn. Open the large treasure chest and claim the blueprint. Oh, and there’s also an Electroculi here. 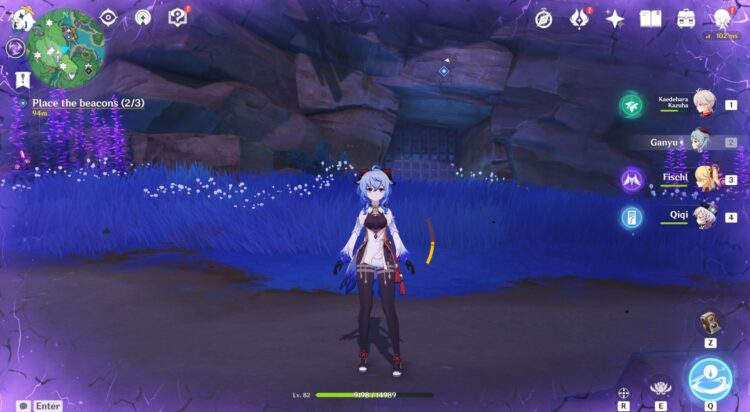 Like the other 4-star craftable weapons in the Inazuma region of Genshin Impact, the Katsuragikiri Nagamasa requires 50x Amethyst Lumps and 50x White Iron Chunk (plus a Northlander Claymore Billet). Mind you, this claymore is slightly similar to the Kitain Cross Spear, the final reward from the Orobashi’s Legacy quest chain in Yoshiori Island.

Indeed, the Katsuragikiri Nagamasa has energy recharge as a sub-stat (compared to the Kitain Cross Spear’s elemental mastery). However, both weapons have the “Samurai Conduct” perk which increases elemental damage by 6%. Moreover, the character will lose energy when their elemental skill hits an opponent, but they’ll regenerate it back shortly even when they’re not on the field. Basically:

Note: If you plan on upgrading this weapon, you can take a look at our Ruin Sentinel/Chaos Gear farming guide for the materials. 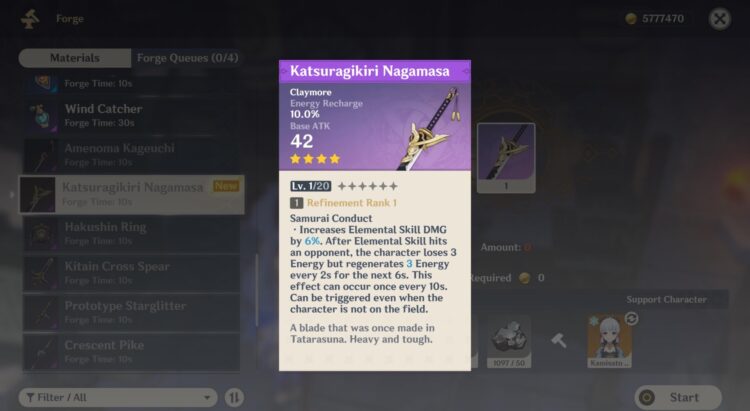