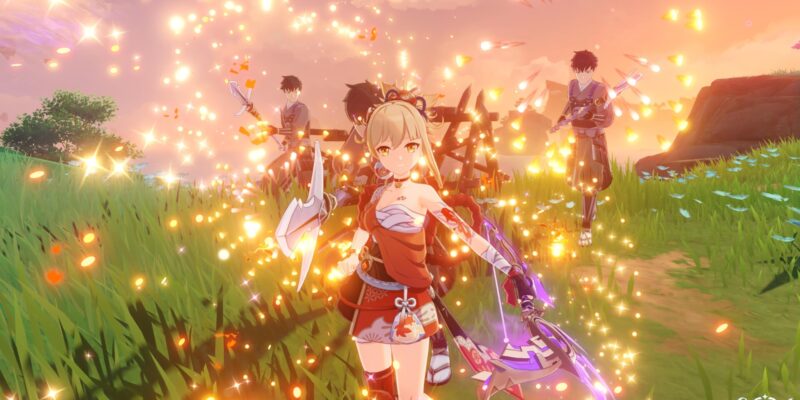 Genshin Impact version 2.0, titled The Immovable God and the Eternal Euthymia, added the region of Inazuma to the ever-growing action RPG, as well as new playable characters to the game’s roster. The next character coming to Genshin Impact, Yoimiya, has just received her own teaser trailer. And, by the looks of things, everyone is already in love with the firework aficionado.

Yoimiya will be available from August 10, as soon as the current Ayaka banner ends. She’s a 5-star Pyro archer who hails from Hanamizaka. If the trailer is to be believed, Yoimiya is the best thing about summer on Narukami Island.

What’s so special about Yoimiya, you ask? Well, she’s the most skilled pyrotechnician in Hanamizaka and the proprietor of Naganohara Fireworks. And that has earned her the title “Queen of the Summer Festival.”

Yoimiya’s character card describes her playstyle as Frolicking Flames. She dances in and out of combat, shooting flaming arrows and marking enemies with flaming attacks. Her normal attack, Firework Flare-Up, shoots up to five arrows from her bow. You can also charge it for a more precise aimed shot. If you charge it to level two, it will also shoot three Kindling Arrows. Yoimiya’s Niwabi Fire-Dance scatters saltpeter around her. Firing arrows through this will cause them to be Blazing Arrows, which deal more Pyro DMG.

As for her ultimate ability, Ryuukin Saxifrage, this allows Yoimiya to leap into the air and fire blazing rockets that deal area damage. An enemy hit with a rocket will be marked with Aurous Blaze. Any attack from a party member that then hits the target with Aurous Blaze will release an explosion that deals Pyro DMG around the enemy. If you defeat the target with the debuff, it will pass to another nearby enemy. You can learn more about Yoimiya on the developer’s blog. And don’t forget, you can get in-game items for Genshin Impact during August with Prime Gaming.