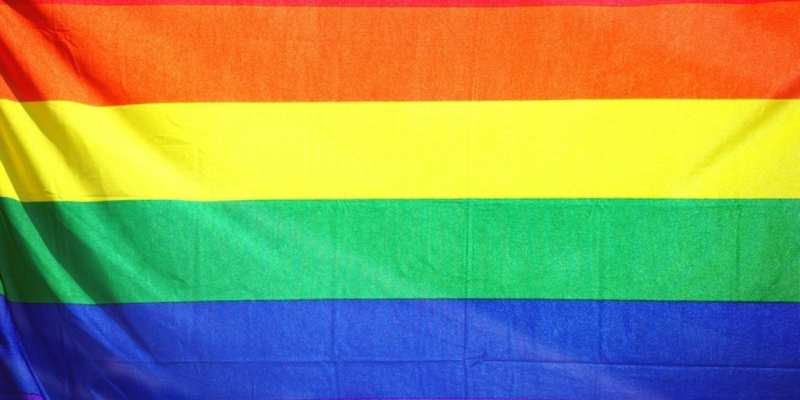 “In today’s news, people are angry on the internet.” That seems to be the story wherever you go, be it the comments sections on Facebook or YouTube, forums like Reddit, or, of course, Twitter. This recent controversy involves GOG — a digital distribution platform with lots of DRM-free games. It’s also owned by CD Projekt Red, the developers of The Witcher series and the upcoming Cyberpunk 2077. GOG’s social media team, apparently, misused the Twitter hashtag #WontBeErased. The hashtag has gained traction in the LGBTQ community and among social rights activists after recent developments in the Trump administration regarding the rights of transgender people.

As the New York Times reported, a leaked memo from the Trump White House could have serious implications for transgender people in the United States. That’s because it, allegedly, would define gender simply based on your physical sex at birth. It’s no longer a choice that an individual makes. This would, theoretically, mean rolling back on the reforms made by the Obama administration. Those are reforms that have been well-received by the LGBTQ community, and most especially by transgender individuals, in the US.

“You were supposed to be the chosen one, Ani!”

What Does GOG Have To Do With All Of This?

Well, that’s fairly simple enough to explain. Yesterday, whoever was in charge of GOG’s Twitter account tried to be edgy or snarky, posting a tweet that read:

“Classic PC games #WontBeErased on our watch. Yeah, how’s that for some use of hashtags.”

GOG wanted to do a bit of standup comedy, but it was a tough crowd given the social climate in the wake of recent political controversies. That tweet with the #WontBeErased hashtag was immediately taken down, but not before the aptly-named Twitter user @Angry_Gr0bi managed to take a screenshot:

Gr0bi’s tweet even acknowledged that the post was quickly taken down since GOG rightfully knew that it would cause a stir. The problem was that the cat was already out of the bag. Grobi’s outrage at a tweet that was already deleted quickly enough also led him to reply with the following: 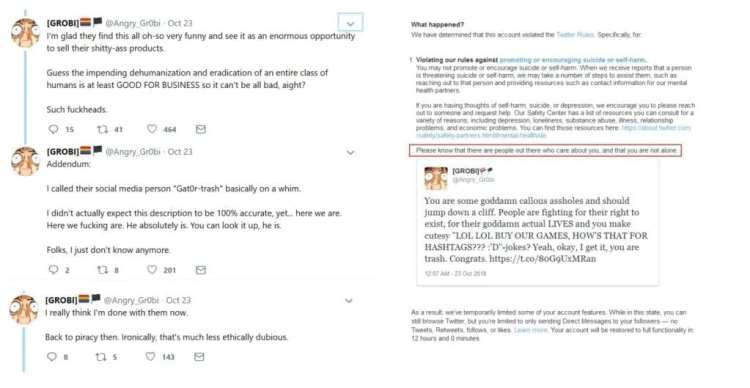 Angry_Grobi’s subsequent replies, some of which led to getting a restriction on Twitter because he wanted GOG’s personnel to just “jump off a cliff.”

People who were highly engaged in social media also saw the anger in Grobi’s sentiments, which then led to even angrier reactions. Naturally, those reactions were reported by various gaming outlets and gaming forums. The outcry was presented as: “GOG makes a transphobic tweet!” or “GOG is transphobic!”

GOG then followed up with a statement on Twitter:

Yesterday, we posted a tweet containing a trending hashtag as a pun. The tweet was neither intended as a malicious attack, nor as a comment to the ongoing social debate.

GOG should focus only on games. We acknowledge that and we commit to it.

That statement wasn’t enough for some very vocal internet users because GOG did not apologize or say “sorry.” The odd thing is, we’ve seen countless times how people demanded an apology on social media, only for the outrage to continue after such apologies were made. We just wrote about the Depth of Extinction developers getting a drubbing even after apologies were provided for an incident that happened three weeks ago. It’s clear from the reactions in this particular topic that the internet has a hard time accepting apologies.

In any case, given the emotionally-charged nature of any socio-political debate, it has left a lot of people upset and riled up. Many vocal netizens were offended at the idea that GOG could misuse a hashtag for comedic purposes. Some have even called for boycotts of CD Projekt Red’s products like The Witcher and Cyberpunk 2077 since the company does own GOG. Meanwhile, on the other side of the fence, people ended up name-calling the offended as just extremely sensitive online warriors and were quick to dismiss their commentary. 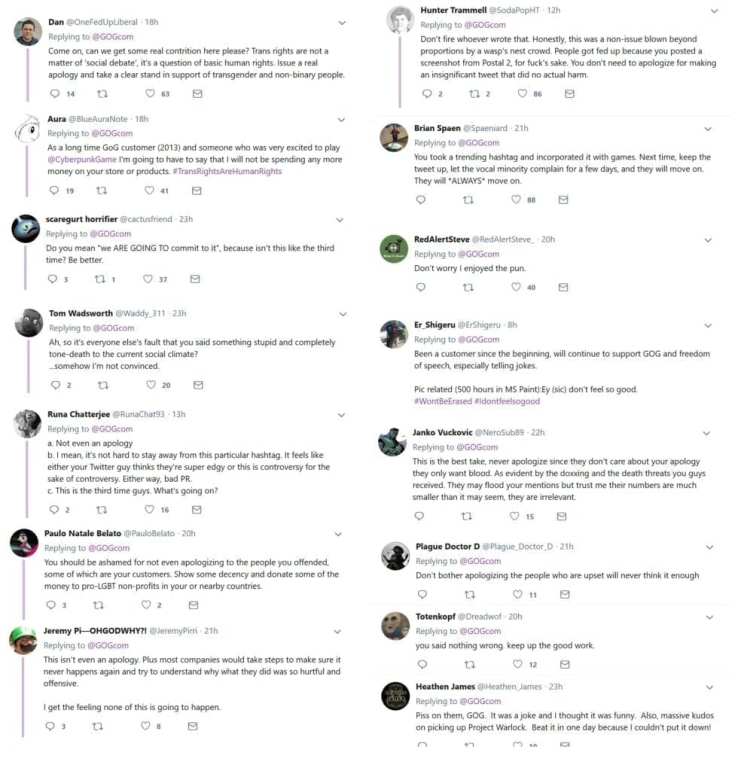 Here’s another one from the ResetEra gaming forum, where one user was banned for “not caring about the issue” and still preferring to buy video games from GOG. Credit goes to Reddit user Matt200717 who mentioned these instances in one particular discussion; I’ve just added some details. 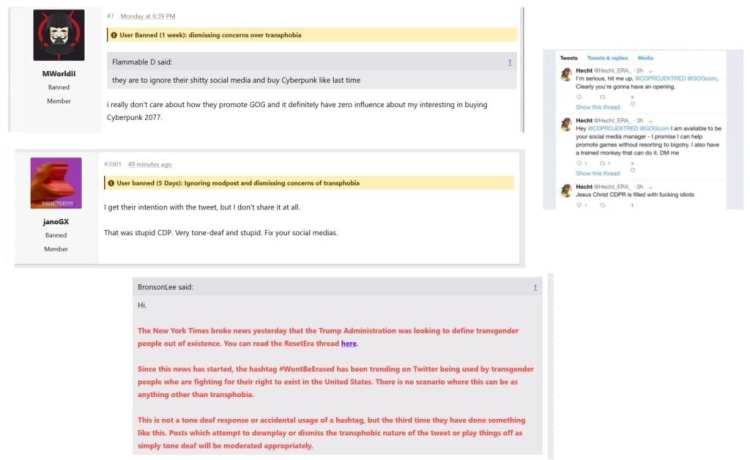 You get the idea. It’s like the 90s/early internet flame wars again —  except the conversations were no longer relegated to the Usenet, Geocities, CheatCC, or GameFAQs forums. Instead, it’s all over the internet, with everyone chiming in for one reason or another. Discussions become too partisan — either “you’re offended by something, or you’re not.” You’re either “one of us or one of them.”

All the while, the old people are going: “What is this internet mumbo-jumbo again?” On a personal note, I’m past my mid-30s and I’m already feeling old while reading all those comments. Whatever happened to gamers just debating whether Mario was better than Sonic, or vice-versa? 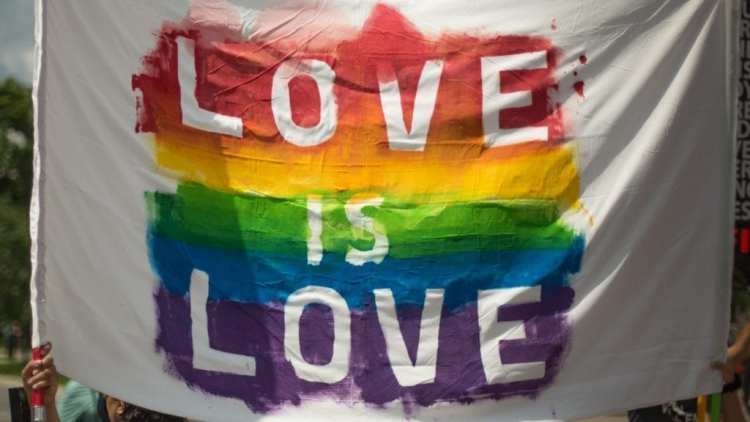 Which Begs The Question: “Why?”

Yes, we (hopefully) all know and understand the plight of the LGBTQ and especially transgender individuals. Yes, we all know how important it is for everyone to feel safe and secure in the decisions they make, especially about their sexual orientation. And yes, we all know that it’s a government’s duty to its people to make that happen.

At the same time, GOG’s misuse of a hashtag in a politically-charged situation was definitely a tone-deaf blunder. An attempt to be snarky or edgy can (potentially) work if you’re a comedian like Ricky Gervais or Sacha Baron Cohen, but if you’re a video game distribution platform then it just seems out of place. This was also not the first time GOG “memefied” social issues in the US; they once offhandedly mentioned, “Did you just assume my gender” in one of their Cyberpunk 2077 tweets which ruffled more than a few feathers for very similar reasons.

The biggest kicker, however, is this: the #WontBeErased tweet was quickly deleted. That mere fact meant that there was a keen realization that it would be a mistake to leave it up for a prolonged period.

Are people reacting because it “existed but was quickly deleted,” or that “it had to exist in the first place?” Moreover, are people reacting because it “offended someone which in turn offended others?” Those are entirely different things. A third explanation would be that some of those who are reacting on social media are true advocates of this current protest. Unfortunately — upon a quick glance at various tweets from many of these respondents before and after this fiasco — I only saw some cartoon GIFs and comments about the snack they had.

So yes, realistically speaking, some of those who are engaged in the discussion (on both sides of the fence) will probably just make a couple of quips before talking about gluten again. It’s like logging on to find something to be angry about or someone you can react to, before moving on and forgetting.

I’m even wondering if all of this helps promote the plight of the LGBTQ community — the ones who are actually out there marching for a worthy cause — or if it does a disservice to them by being so worked up “due to a deleted tweet related to video games.” 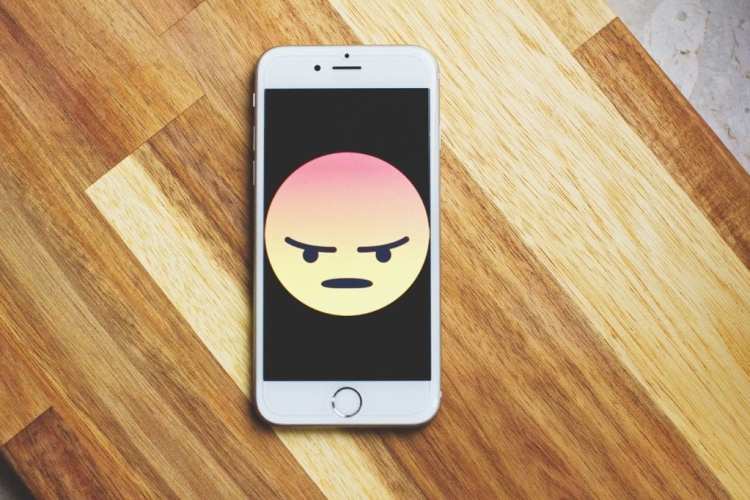 If you read our earlier piece regarding vindictiveness and outrage culture on the internet, you’ll know where this is leading. If someone says something insensitive, or someone is offended, you know one way or another it’s going to be a talking point for random passers-by. And if you’re not the type who gets easily offended, you’re also considered “part of the problem” or “dismissive” towards others. That’s how outrage culture warps our perception of different viewpoints.

Psychologists and researchers have mentioned in the past how easily outrage takes over our persona. It becomes contagious, and it becomes pleasurable. We involuntarily seek out ways to trigger being upset emotionally. One angry commentator leads to another angry respondent which, in turn, leads to more anger. Like a cat video or a new trending dance move on social media, outrage is viral. That’s because the main goal is to publicly share our stance and moral superiority. Because humans are predisposed to prefer a moralistic standing in life, it leads to additional personal validation of one’s views.

We also have to take note of our inherent Negativity Bias. That’s where we, as humans, are more heavily affected by negative incidents, words, phrases, and the like compared to something that’s positive. A term like “transphobia”, which has intensely negative connotations, will essentially make people react more gravely than, say, a headline that reads: “GOG makes insensitive tweet but also takes it down after a few minutes.” If stories were like that, no one would bat an eye because the matter is seen as resolved. But when you use terms that provoke and incite heightened emotions, those become worthy of clicks and re-tweets.

So when does one have a valid complaint and sentiment, and when does that simply become generic outrage culture on the internet? When are people truly sincere with their beliefs, and when is it simply grandstanding on the internet because of the social media platforms available to us?