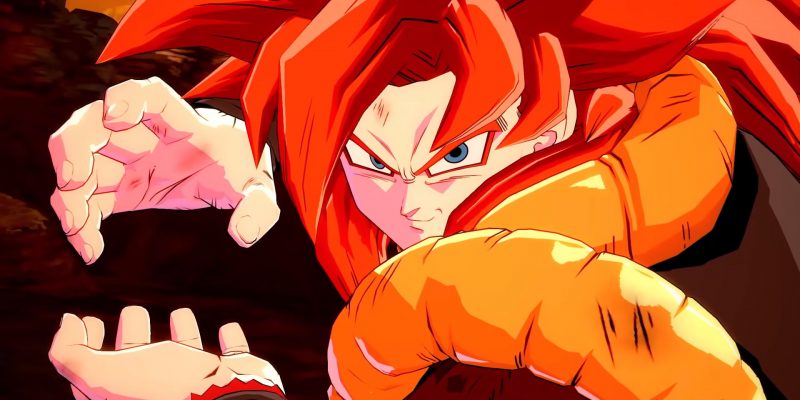 I usually like to forget Dragon Ball GT ever happened. However, one thing no Dragon Ball fan could ever forget is the awesome power of Super Saiyan 4 Gogeta. The red-haired, fur-covered fighter wields monstrous power with supreme confidence. On March 10, that awesome power arrives in Dragon Ball FighterZ as Gogeta SS4.

Here’s what’s happening in Dragon Ball FighterZ over the next few days. First off, a new patch hits on March 9. It will fix some minor issues and further balance the fighting game’s roster. Gogeta SS4 powers up the next day on March 10 for players who own the FighterZ Pass 3 as an early access treat for supporting the game. On March 12, Gogeta SS4 will be available for all Dragon Ball FighterZ players. You will need to purchase the character if you don’t own the pass.

You can check out the powerful Saiyan fusion in action in the Gogeta SS4 Dragon Ball FighterZ gameplay trailer below. It shows off the character’s trademark confidence (some would say arrogance), as well as a glimpse at what a battle between Super Saiyan 4 Gogeta and Super Saiyan Blue Gogeta would look like. It’s brutal.

Gogeta SS4 is a fusion of Goku and Vegeta in their Super Saiyan 4 forms from Dragon Ball GT. The character features in the anime when the two Saiyans fail to defeat Omega Shenron in their individual Super Saiyan 4 transformations.

The fusion character is infinitely more powerful than the two heroes are alone. However, the downside to the transformation is that it only lasts for a short amount of time. It’s a major drawback considering Gogeta is rather arrogant and wastes time humiliating his opponents.

Gogeta SS4 follows Super Baby 2 as the next DLC character to join the Dragon Ball FighterZ roster. You can purchase the game and all of the DLC characters for PC through Steam. If you’re a fan of Dragon Ball games other than FighterZ, you may also want to check out the final DLC coming to Dragon Ball Z: Kakarot in early summer.