Giants Software has cornered the farming sim sub-genre with its aptly named Farming Simulator franchise. With 10 mainline releases in the span of a decade, the series has sold millions of copies and a fostered a fairly large and enamored community. That said, it’s not without its limitations.

Though the series has grown steadily with release after release, there are still some fundamental shortcomings even its latest iteration, 2021’s Farming Simulator 22. I reviewed the game and enjoyed it quite a bit. Yet, I still had to note some shortcomings, particularly in the department of the sim’s fairly antiquated driving mechanics and physics system. Long have I wanted to see Giants step it up to the next level, having pointed to the work that Saber Interactive has done with its MudRunner and SnowRunner projects as great examples. Well, now, Saber Interactive has gone right ahead and marched squarely into Farming Simulator‘s territory with the release of SnowRunner Season 8: Grand Harvest.

It’s all in the details

Saber’s work with its Runner franchise has been lauded by sim fans, primarily due to the amazing physics system that’s been a series staple since the beginning. The way the wheelbase of each vehicle minutely reacts to everything in the terrain, whether it’s going over a rock, squishing into a puddle of thick mud, or rolling over rubble, is almost therapeutic to watch. The visual strain of getting stuck and having to maneuver along a tricky path is articulated so well, it’s almost as if you can feel your truck working itself as you consistently flick the thumbstick and triggers of your controller back and forth. It’s this visceral, gritty driving experience that gives MudRunner and SnowRunner their signature feel and charm. If the systems in place were any less detailed, less simplified, I’d argue that the franchise wouldn’t be as revered as it has become.

Having said this, it’s why I’ve always felt a bit disappointed, and increasingly frustrated, with the simplified elements of Farming Simulator 22.

Having gotten attached to the series with Farming Simulator 17, I’ve watched Giants build upon its franchise over the course of a half-decade at this point. Within that time, there have been two subsequent mainline releases; Farming Simulator 19 and then last year’s Farming Simulator 22. I wasn’t overly impressed by the former simply due to the fact that I expected a bigger swing from the studio. This was mainly because a seemingly big competitor did arrive around the same time: Iceflames’ Pure Farming 2018.

With gameplay mechanics so incredibly similar, there were many aspects of Pure Farming 2018 that I liked a bit more than Giants’ offering. The driving mechanics, in particular, felt more refined and realistic.

The physics were weightier, and similar to that of Saber’s work, there were minute visual elements that really grounded the experience. It wasn’t perfect, but, at least to me, it leaned heavier on the “sim” side of the spectrum. And it’s this notion that created the basis for the entire argument at hand. Living up to the title

In recent years, a game carrying “Simulator” in its primary name has almost become synonymous with the ironic twist of it being quite poor at realistically executing the idea it claims to be specializing in. There has been a deluge of low-effort or satirical releases across the spectrum, effectively making the simulation genre as a whole a field of weeds with only a few good crops in the mix.

Farming Simulator thankfully does not fall into this category of disheveled clutter. This was evidenced by the release of Farming Simulator 22, which was a good push forward for the series. Its extra year of development, which broke the bi-annual streak Giants had kept for a while, paid off with richer mechanics and gameplay elements 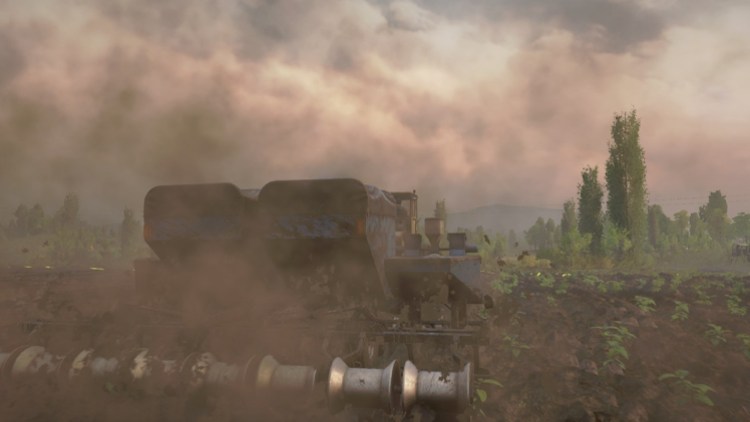 That payoff included the implementation of long-requested features. Seasons and forms of additional revenue streams to help diversify the in-game economy were added. The included features really help add more depth and purpose to the overall scope of the game. Indeed, Farming Simulator 22 does feel more “sim-like” thanks to these updates and improvements. However, that pesky area of driving mechanics and physics still aren’t in the same league as what Saber has achieved.

Getting stuck can be a good thing

Now, let’s revisit that whole “What makes a sim, a sim?” argument, again. Farming Simulator is just that; a game that’s meant to simulate the life of a farmer trying to take their fledgling business to the proverbial top of the haystack.

Meanwhile, MudRunner and SnowRunner, despite not featuring the self-titled “Sim” label in their names, still very much fall into the category of being on the more realistic end of the driving sim sub-genre. There are still some arcade-like concessions to help with convenience and simplicity. However, the core elements are rich enough to prevent the games from becoming “too arcadey.”

The driving mechanics and physics of Farming Simulator 22 are somewhat better than Farming Simulator 19, but I didn’t find the differences to be too drastic. I think the primary reason I came out enjoying it more than the preceding entry is simply due to the depth added to all the other areas of the title, as mentioned before.

But, if we really could get those richer improvements, then the Grand Harvest expansion for SnowRunner effectively demonstrates what that could — and frankly should — have looked like. SnowRunner is clearly a much different beast than that of Farming Simulator 22. Again, these titles target different aspects of simulation. But since Farming Simulator is almost exclusively reliant on using heavy machinery to carry out most tasks in-game, that’s where the overlap with a title like SnowRunner comes in.

As SnowRunner shows, the muck of a saturated feel can really cause your tractor to strain. You have to fight to maneuver around it, along with the often off-road paths of a farm itself. When transporting cargo, the weight of the load in the trailer can be properly emphasized, especially when it requires leaving the pavement.

Truth be told, the actual farming gameplay in Season 8 of SnowRunner is actually quite minimal; it doesn’t overshadow the rest of the more traditional objectives. And, even when participating in actual fieldwork, the process is not as rich as what Farming Simulator has to offer: fields don’t have to be plowed or fertilized at different stages to help improve yield; you don’t have to worry about weeds growing; there aren’t different seasons to take into account; you don’t have to watch the market value of crops rise and fall to determine what you should be planting.

The lack of depth in these aspects isn’t surprising considering this is just an expansion and the farming mechanics have been regulated to one map. But still, the fact that there is now direct overlap between these two franchises shows that Farming Simulator 22, even though it’s a newer game in a longer-running franchise, still falls behind in some ways.

Even with this direct “show-up” (if you’d like to call it that), I can’t imagine Giants is overly concerned about matching SnowRunner‘s energy. The driving model of Farming Simulator is adequate, and far from bad. But the “floatiness” of the physics and lack of visceral feedback of these big machines does continue to take a chunk out of the experience.

These tractors and trucks have huge tires (and tracks) for a reason. They’re meant to make easy work of the muck and dirt that comes naturally with life on a farm. But, the relatively static ground elements and overall simplified nature of handling have long been present in the series.

Farming Simulator is still very much different enough to not directly compete with Saber’s projects, even if more direct “inspiration” is to be taken in the future. After all, gaming has moved onto the next generation as a whole, so richer, more complex experiences are naturally to be expected.

Yet, at least for the moment, Giants seems content with improving other aspects of the Farming Simulator experiences, such as giving us a whole new map filled with trees to cut down. It’s still a great franchise overall, but Saber has finally proven to me that all these years of wanting a more authentic off-roading experience out of these tractors isn’t some pipe dream. It can be done; it has been.

Rather, for now, it looks like Farming Simulator fans still have to be content with a mere puddle, despite their being a big-old swamp out there.

Netflix has announced a live-action Gears of War film adaptation