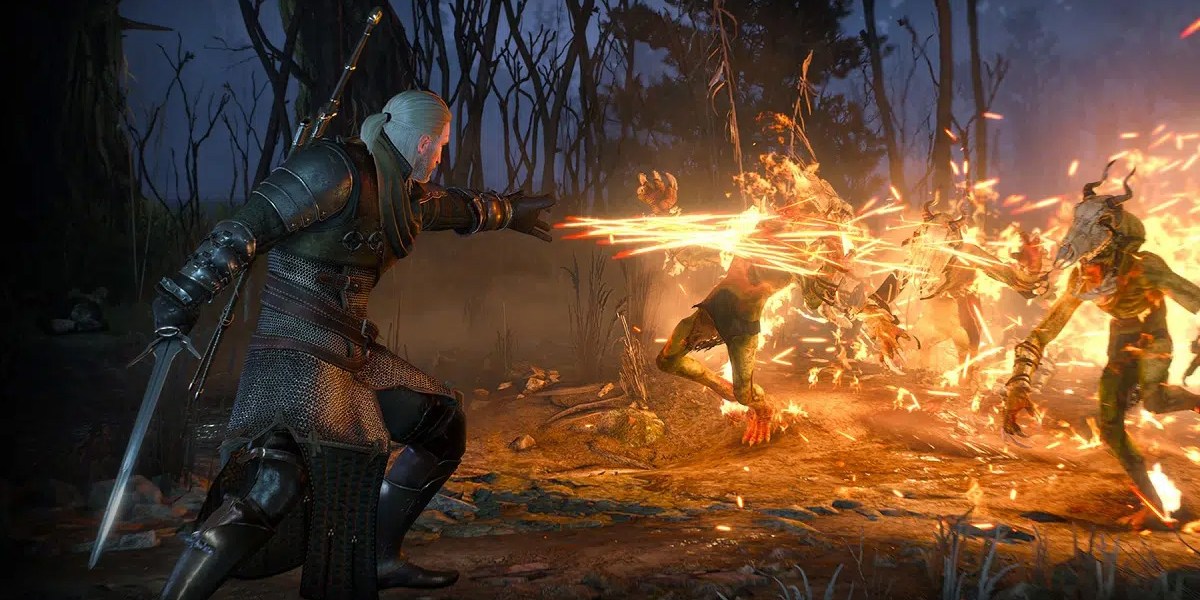 If you were anywhere near as eager as us to play The Witcher 3 next-gen update, you are likely now down at the tavern feeling woes aplenty due to the crashing, bad performance, and other bugs. Many users including us have experienced technical issues, and CDPR has already acknowledged that it is aware of the problems and is investigating.

There are sure to be incoming hotfixes to address at least some of the issues with The Witcher 3 next-gen update, but we’ve fortunately found a few workarounds in the meantime for those who just want to play.

The main issue affecting players is the crashing that occurs upon loading any save into the world. We did some limited testing with an Nvidia graphics card and found two solutions.

The easiest option is unfortunately a less desirable option. When you initially launch the game, it now goes to a second launcher, or hub, as pictured below. Launch the game in the older, DirectX 11 API and it should work as opposed to the newer DirectX 12 API. The downside is that you lose access to Nvidia DLSS 2 and 3, AMD FSR, ray tracing, and Nvidia Reflex in this mode, as those are relegated to DirectX 12 version. The game will also likely run worse overall, but it should run. 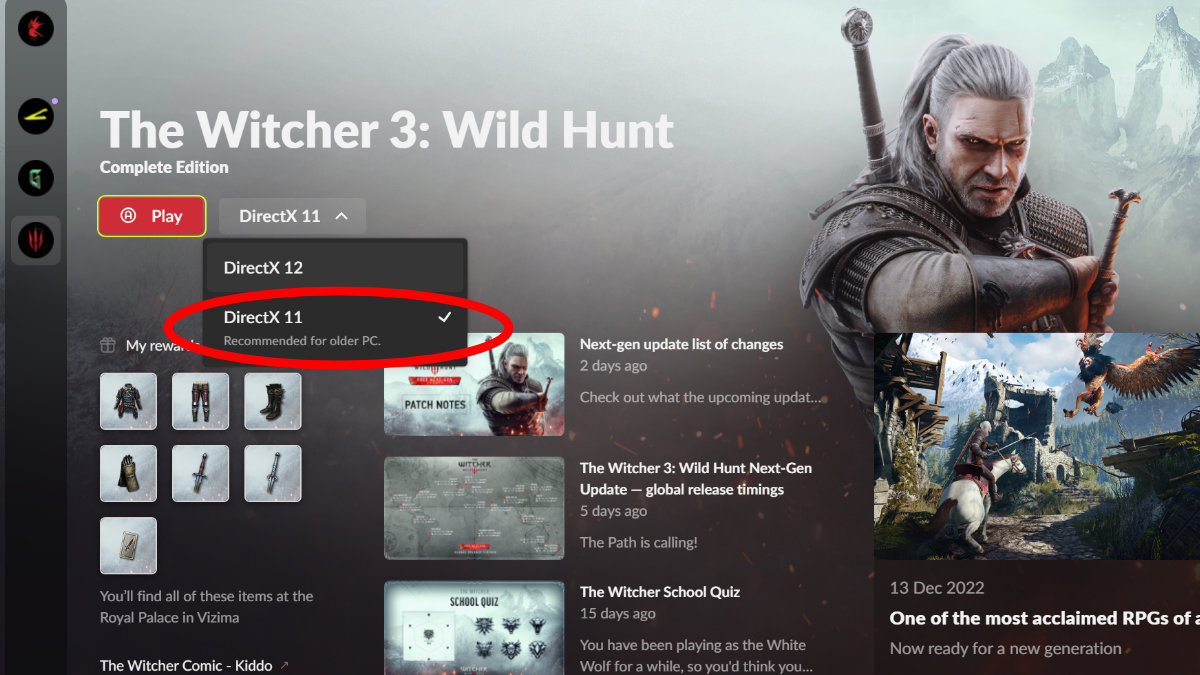 We learned this other workaround by accident as a result of being hardware guinea pigs. We were intentionally benchmarking on an older Nvidia driver and found the game launches and runs in DirectX 12 to decent results. Try using one of the Game-Ready drivers such as 522.25 or 526.47. You can refer to our article on updating or reinstalling Nvidia drivers if unsure how to find those on Nvidia’s website.

After noticing startlingly bad performance from an RTX 4080 paired with an overclocked Intel i5-13600K, we began to wonder if there is a necessary driver level update to help the game run better in DirectX 12. Surely enough, there is. Upon updating to the latest Nvidia driver, we too encountered a 100% crash rate upon trying to play The Witcher 3 next-gen update.

Keep it Classic for now

This leads us to the final option for addressing crashes and other monstrous bugs you may encounter. You may just want to roll the game back to the Classic version. It’s a drag to be sure, as you won’t be able to access the new content or features, but it will at least let you play an optimized and stable version of the game. You can always update again later once the necessary patches are available. 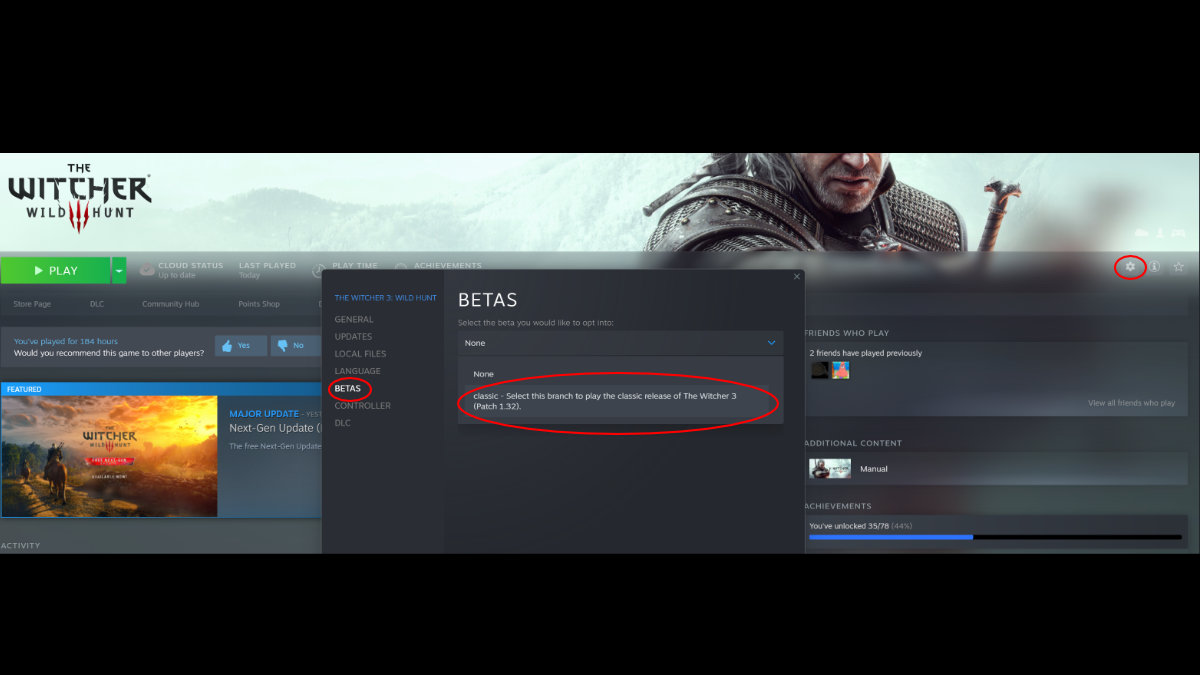 To roll back the game version on Steam go to The Witcher 3 in your Library, click the cog Settings wheel on the right side, click “Properties,” then click “Betas,” then click “Classic Patch 1.32.” It will then download and reset the game files.

On GOG, select “Settings,” then “Manage Installation” and choose “Configure.” You can then select the “Classic” option there.

Do the new graphics settings even work?

The good news is that it’s not all bad news for this update on a technical level. Upon running The Witcher 3 next-gen update, we noted that it feels quite smooth in DirectX 12 compared to DirectX11. The ray tracing adds a whole new layer of depth to scenery and is a far step above the classic lighting systems. Unfortunately, ray tracing is currently murdering framerates.

Then there’s Nvidia DLSS 2 and DLSS 3 (Frame Generation), which are surprisingly good implementations based on our very limited testing. There was no immediately noticeable ghosting with DLSS 2, which suggests it will help uncompromisingly boost framerates for the those with weaker gaming rigs, provided CDPR can fix the performance issues introduced in the update. DLSS 3 Frame Generation also looks quite good above 120 fps, with no noticeable image quality issues. It adds 5-8ms of latency, but one could make the case that’s a fair tradeoff for the added smoothness. The Witcher 3 feels quite nice with the performance enhancements turned on, even in it’s currently unoptimized state.

This should be a good update eventually, allowing plenty of new Witcher fans to enjoy this 2015 title in enhanced glory. The widespread crashing issues and other technical issues are disappointing to be sure, but the tips we detailed should allow you to play The Witcher 3 in some fashion to enjoy the next-gen update.

Overwatch 2 Winter Wonderland event begins, this time with an unlockable skin for Brigitte

High on Life: How to stop the fans