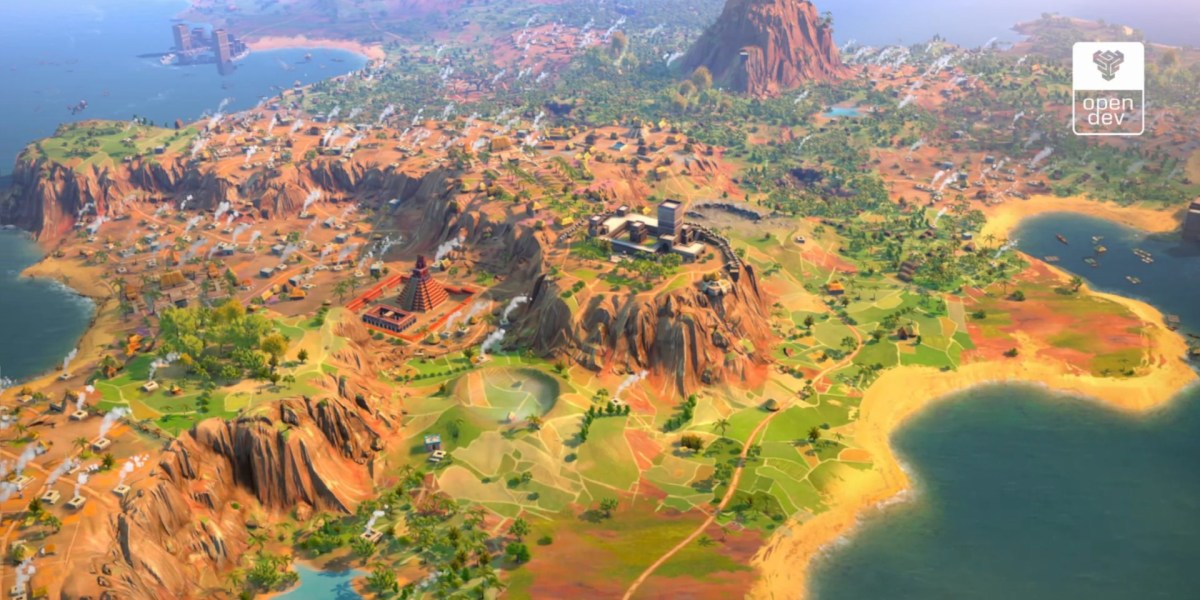 Humankind, an upcoming 4X strategy game from developer Amplitude Studios and publisher Sega, won’t be out until next year. Still, there’s a lot to look forward to thanks to the OpenDev program. With it, players are given a glimpse into the game’s pre-alpha features and mechanics, many of which are quite exciting to behold.

The pillars of the 4X genre—explore, expand, exploit, and exterminate—are part of Humankind‘s core gameplay loop. The OpenDev program, meanwhile, lets you play scenarios that showcase these. At the end of each OpenDev scenario, you can fill out a feedback form to provide Amplitude Studios some input on the mechanics you liked as well as the instances that proved to be problematic.

For starters, Amplitude Studios already considers Humankind its magnum opus. That’s saying a lot considering that the team also created the Endless franchise (Endless Legend, Endless Space and its sequel, and Dungeon of the Endless). By implying that Humankind is already its greatest work (so far), some might expect it to be an epic experience and one that could revolutionize the way we approach the 4X strategy genre. 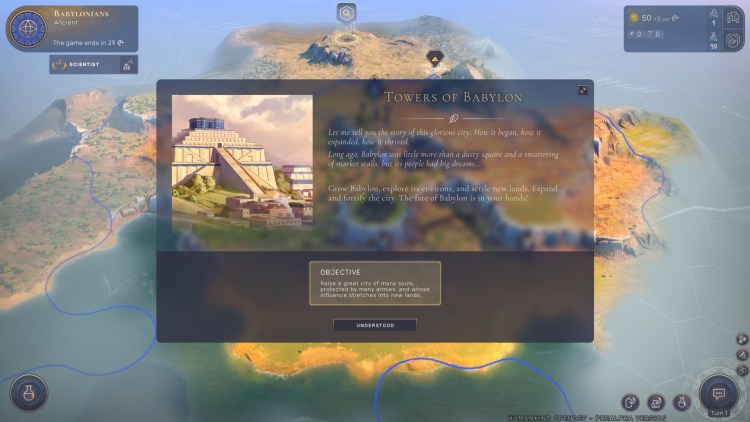 The game boasts 60 historical cultures with their own unique perks. These can be combined as you progress from one time period to the next. You could start out as the Egyptians or Babylonians as you lay the foundations of your empire. Then, you could try out the Khmer or the Vikings as you expand ever onward.

Much later, you might opt to field the longbowmen of the English, the elite units of Spain, or the fierce Aztec jaguar warriors. Indeed, the possibilities are similar to the franchise Amplitude is known for—endless—as Humankind boasts one million different perk combinations to boot.

That brings us to Humankind‘s OpenDev program. Players were encouraged to sign up via the Games2gether website for a chance to play a select few scenarios: one about domestics and exploration, another about combat (which is actually split into multiple battles), and the third one that combines both while emphasizing siege warfare.

Following the scenarios, which were released at intervals from July 30 until August 13, was akin to taking baby steps. The first scenario where I played as the Babylonians already reminded me of Endless Legend what with the hexes and resource nodes/icons. 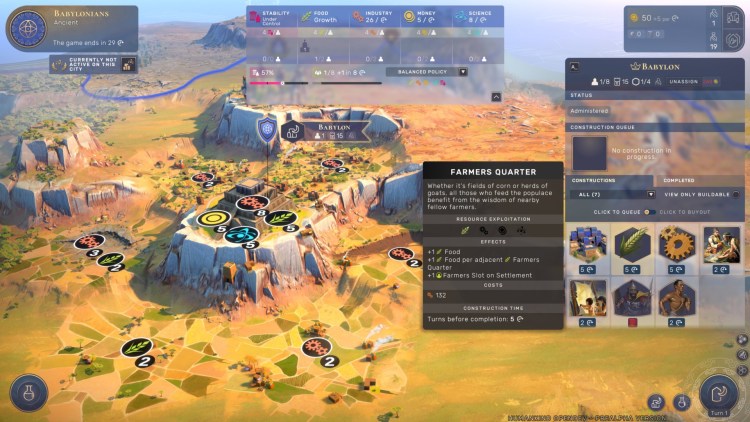 As for units, every Civilization veteran knows that scouts are often the first thing in your build order. In this Humankind scenario, though, I already started with a couple of scouts to check out nearby locations with. They could even construct outposts which will, eventually, turn into cities.

Then, as I made my way past a mountain, I watched in awe as a woolly mammoth lumbered across the map while a giant elk (a Megaloceros, I think) passed across the distance. It turns out, I’d be battling the fauna as well. 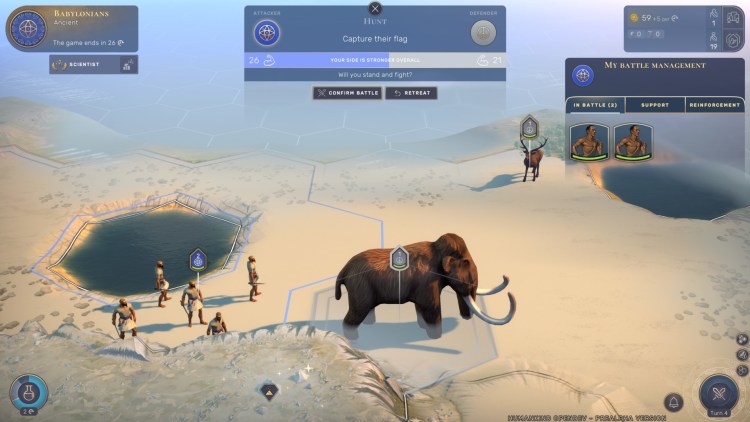 I had my scouts roam the locations all while strengthening my first city. With each passing turn, I marveled at the gorgeous map design, visual details, and effects. Humankind, even at this stage, already managed to capture the essence of a living, breathing world. Remember the first two “Xes” in the 4X genre, explore and expand? You can bet that doing those would be very pleasing on the eyes. 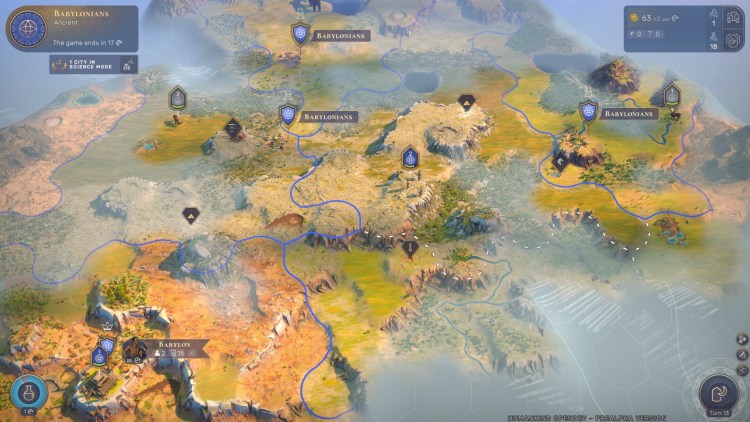 I did, however, notice a few nagging issues. While exploration was a treat, I can’t help but feel that movement animations are egregiously slow. For now, there isn’t a way to actually skip movement animations at all and this reared its annoying head once I started the combat scenario that showcased four battles.

Battles in Humankind take place on a tactical map that seamlessly transitions from the actual campaign world. It’s still similar to Endless Legend in that regard, and you won’t see a loading screen and a new area similar to what Age of Wonders does. 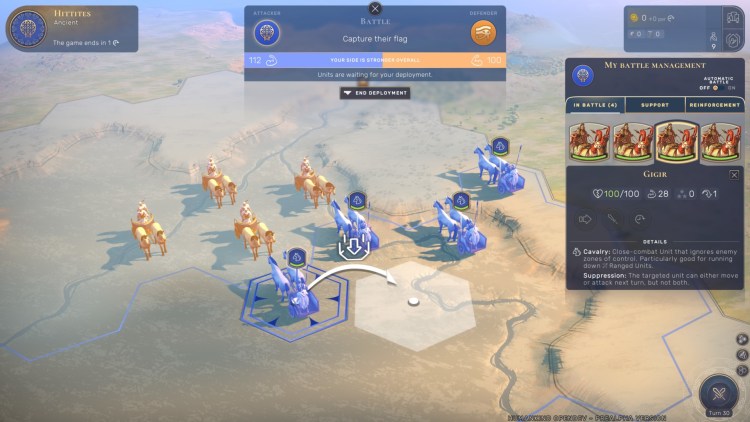 One combat scenario had me fighting off Egyptian chariot archers while playing as the Hittites. Keep in mind that I had melee cavalry units, but they moved so ploddingly slow that I thought they were oxen carts instead.

Terrain and unit bonuses are also emphasized. Units that have the high ground will probably end up chopping off your troops’ limbs like a very misguided Anakin. Still, it’s worth mentioning that terrain features can sometimes be hard to spot. In the Hittites vs. Egyptians battle, I barely noticed that my cavalry suffered attack penalties since they were crossing a river that was hardly visible. 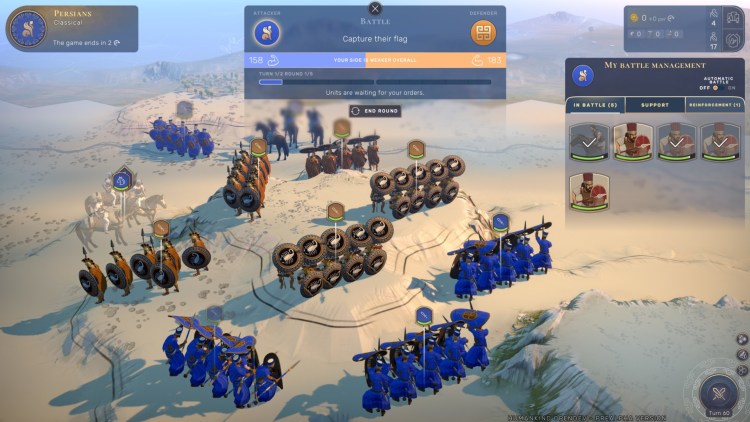 In the next battle, Plataea (Persians vs. Greeks), that concept (and issue) became more glaring. I had a tough time spotting which hills were actually hills, which hexes were elevated, and which spots prevented me from attacking my opponents.

On my first attempt, I started scratching my head since I thought my cavalry had flanking bonuses, but those Greek soldiers were still able to counter effectively (seen above). However, on my next try, the Greeks miraculously abandoned the high ground and my Persian Immortals had boosted attack modifiers. 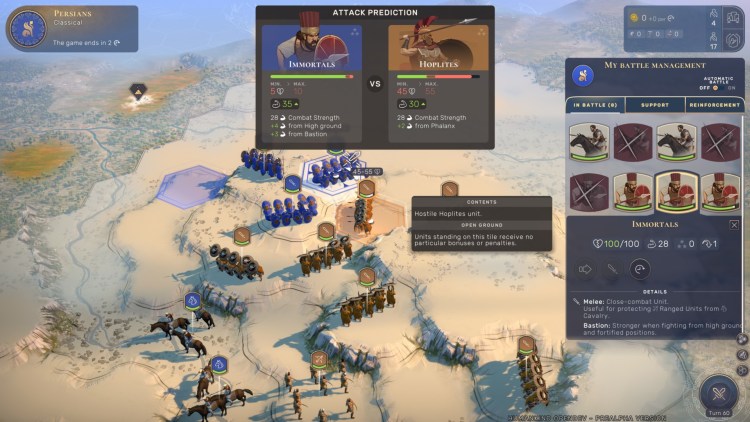 There were two other battles that were part of the scenario, but I’ll fast forward to the final one that was made available just recently. This Humankind scenario starts at turn 120 (the mid-game apparently). In it, I controlled two English cities and I had to fight off the combined might of the Khmer and the Aztecs, all while fielding more units and making sure that my cities were prospering.

Now, because this scenario focuses on siege warfare, it also meant that I had to weather the storm. The game even tells you that should enemies reach your city’s walls, you should click on the “endure siege” button. I did just that thinking my longbowmen would save the day. 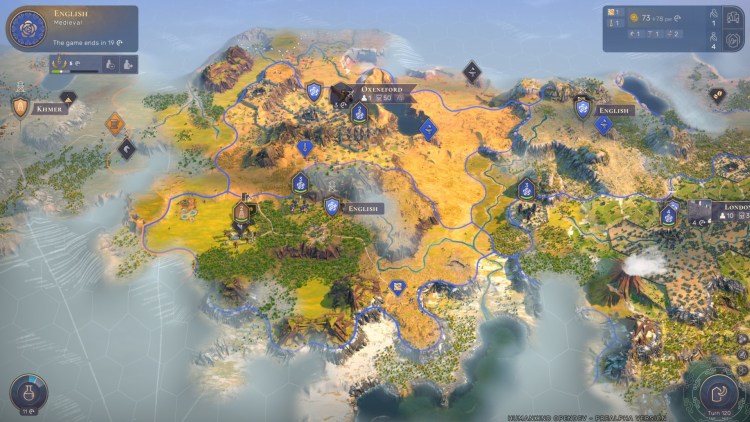 Oh, I was so very wrong. Within a handful of turns, there were Aztec jaguar warriors, Khmer elephants, great swordsmen, and trebuchets all milling outside the gates. Then, the enemy assaulted my settlements and I had to fight off the entire horde.

It was definitely not what I expected since I only had a few longbowmen (that got rocks lobbed on their squishy bodies by siege weaponry), some swordsmen (which were outclassed by jaguar warriors), pikemen (who barely killed the cavalry units), knights (that got woefully swarmed), and peasant militia (who were so useless since they lost 90% of their HP without making a dent against any target). 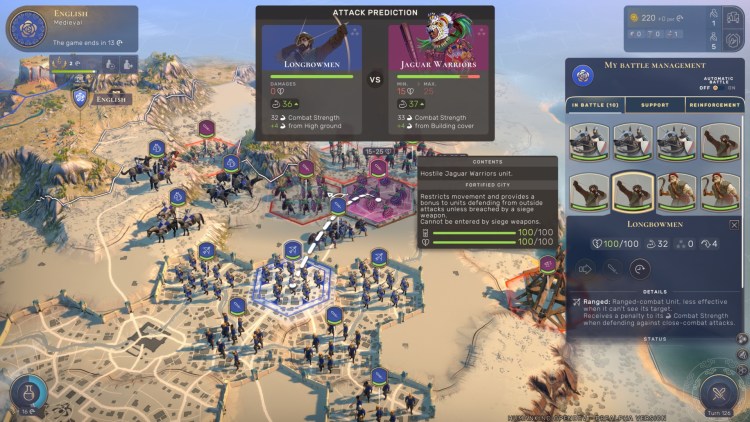 After that drubbing, and knowing that there was no winning, I just clicked on the “end turn” button to see how the rest of the scenario would play out. I thought London would fall, but, as it turns out, the AI was just eager to sit back and flex its muscles. Then, this is when additional problems occurred.

It looks like the AI also suffers from those slow movement animations. In fact, waiting for the next turn took roughly 30 seconds since the AI was probably moving its units around like a turtle. Since the 4X genre’s mantra—popularized by the Civilization games—is “one more turn,” it did make the entire process tedious. 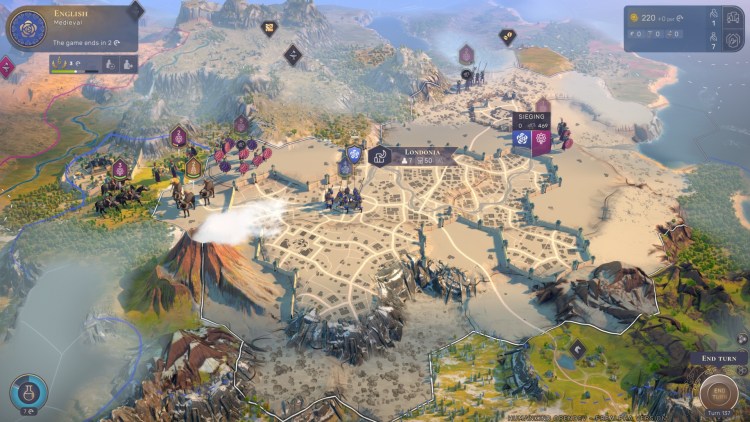 One small step for Humankind

You might think that I’m being unfair towards Amplitude Studios with these critiques. On the contrary, I’m actually very eager to see more from Humankind. Keep in mind that the OpenDev program shows the game’s pre-alpha stage only. It’s far from what can be considered as anything resembling the finished product, and it’s a means for the developers to gauge concerns with a bit of input from players.

The issues I mentioned—from slow movement and combat animations to terrain features and tactical modifiers that were hard to spot—might be present now. But, we could see these get tweaked and polished as time goes by. The positives, however, make me anticipate what this offering could truly bring. It’s that feeling of being there at the dawn of exploration, seeing a stunning world that changes before your very eyes, and expanding your domains as you reach new ages. All of these can be done as you craft wonders in your cities, research additional techs, transition to different cultures, and battle foes in tactical engagements in one seamless map.

Eventually, I’m hoping we get more detailed scenarios and mechanics, as well as new eras to play with, and perhaps another round of the OpenDev stage. We might be seeing small steps as Humankind gets closer to its 2021 release via Steam. Still, those small steps could be one giant leap for the genre. 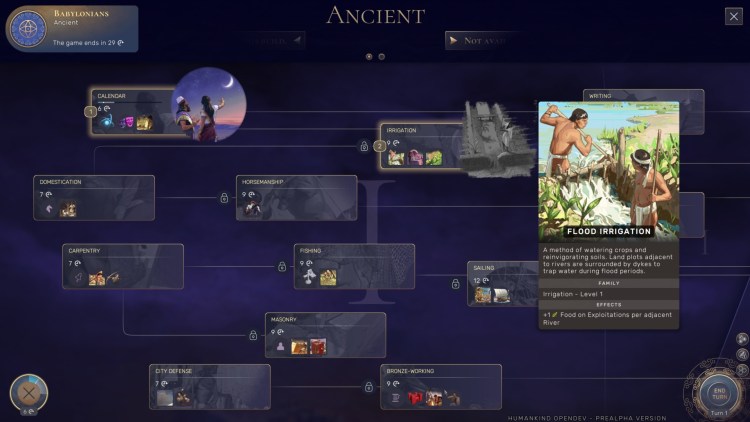 By Kurt Perry24 hours ago
Guides