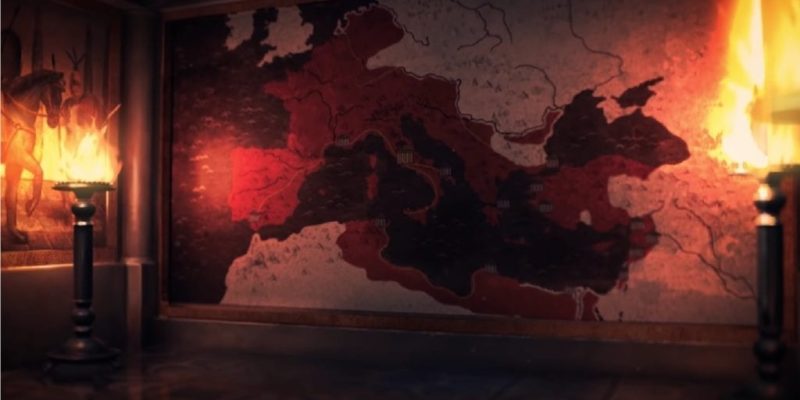 It looks like you’ve got Imperator: Rome, general. Paradox Interactive’s newest grand strategy game will leave you feeling a bit confused at first, whether you’re a newcomer or a long-time armchair strategist. Fear not because we’ll help you out with this guide. There are a handful of moves that you need to do before you unpause the game and get one step closer to your destiny.

Note: You can also check out our official review of Imperator: Rome which mentions some of the basics and issues that you might encounter and our Interesting Nations guide. 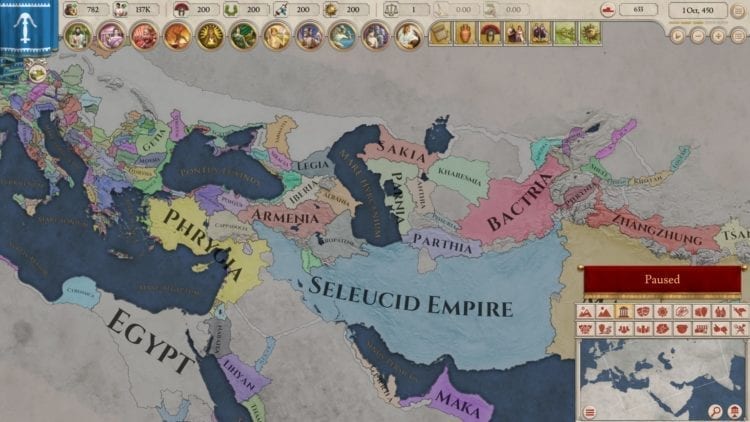 In this particular start, I chose the Seleucid Empire led by Seleucus I Nicator, a trusted commander of Alexander the Great. Seleucus is one of the Diadochi or “Alexander’s successors,” poised to go to war for the famed conqueror’s former territories. The same interface will be present no matter which of the hundreds of nations or tribes you choose in Imperator: Rome. You’ll still see an overview of your manpower, gold, and “powers.”

Powers — military, civic, oratory, and religious — are essentially akin to additional currencies or resources, although used for a variety of actions. Among Paradox fans, these are known as “mana.” Yes, it’s a bit like magic because these are intangible stuff that let you make decisions or actions in the game.

Military power is accumulated to be used for traditions that boost your army’s capabilities. Oratory power, meanwhile, is to establish trade routes or start diplomatic ties. Civic power is for trading or managing your population, whereas Religious power is something that needs work. You’ll eventually see which type of power is needed for a particular action or decision.

Below that is where it gets more interesting. You’ll see various circular icons for different panels affecting everything in your empire. 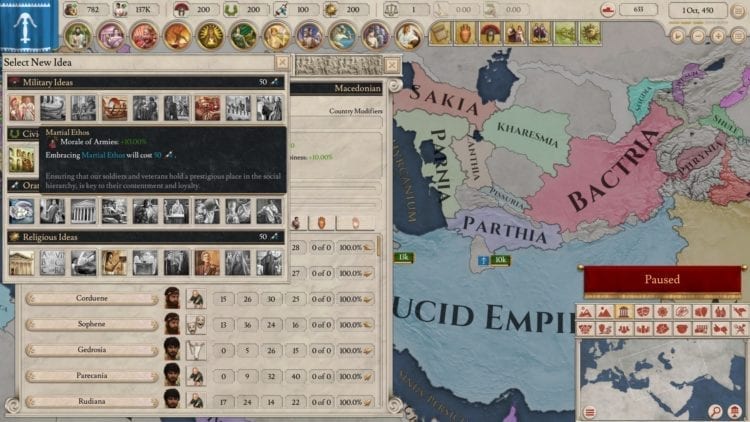 Apart from your ruler’s portrait, modifiers, and a rundown of your provinces and population, the nation overview also has your national ideas based on the four powers. In the case of the Seleucid Empire’s government, they can have one military idea and two oratory ideas. Make sure that you’ve chosen your national ideas before starting your Imperator: Rome campaign. 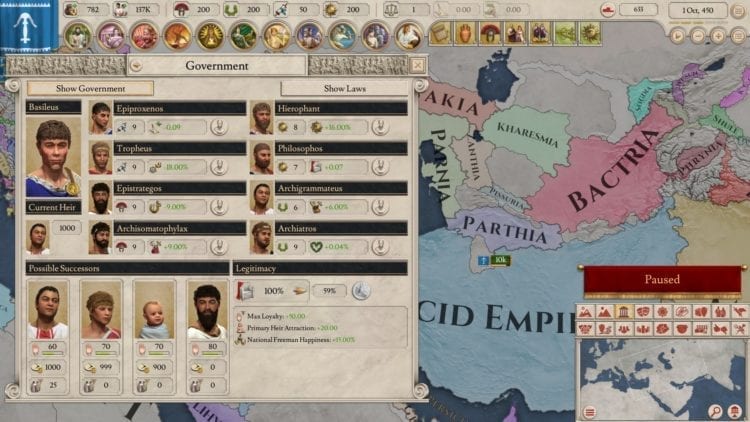 The government panel shows your ruler (again), your heir, and possible successors. Do check if your heir/s are married to ensure more descendants down the road. You can arrange marriages for characters in your territory or find a suitable partner abroad. Your legitimacy is also on the lower right-hand side of the panel which determines the level of support for pretenders to the throne.

Note that this panel will look different for a republic like Rome which will show you the influence of clashing parties in the senate. You could just as easily throw in your support for a party by “upvoting” them. This might be a waste of mana later on since influence can fluctuate easily.

This panel will also look different for tribal governments which will show you the various clans in your nation. Take note of each chieftain’s loyalty since they have their own retinues.

This panel also shows your advisors, each one with a select power focus and level generating additional effects. For instance, the Archiso-doodle, uh, bodyguard, increases the morale of your armies. You don’t need to change this now since, in many cases, the best ones for the job are chosen already. You’ll be notified if they die so make sure to assign new ones to take their place.

You can also check out your country’s laws. These determine everything from taxation to maritime practices and even succession laws. These also require 250 oratory power to change, and you probably won’t need to make drastic changes soon. 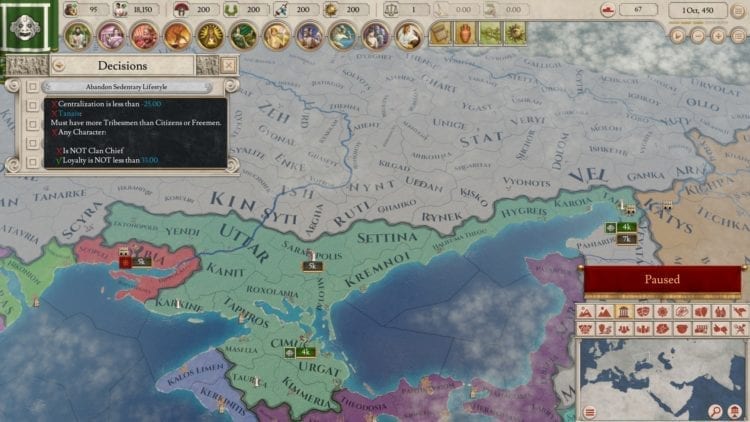 The only time this early change would be viable is when you’re playing as a Settled Tribe and you wish to change to a Migratory Tribe. You can see an example above when playing as Scythia. Once you’ve decentralized your government and can begin the migration, you can have your people pack up and leave their original city. This will allow you to find new lands to settle, but that’s a story for another time. 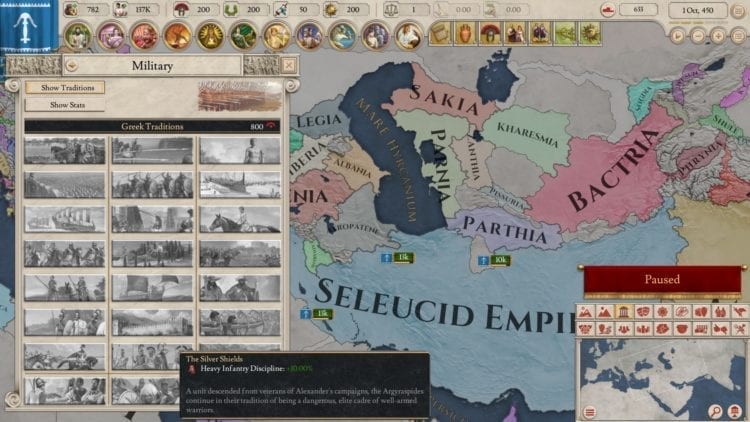 You’re not likely to make any changes in this panel yet since you need a lot of military power to make your pick. It’s best to look at the effects of each tradition instead so you can plan ahead. Ideally, you’ll want to focus on heavy infantry but that can change depending on the availability of resources (more on this later).

What you’ll instead want to do is look at your notifications. There’s a good chance that you haven’t assigned a leader yet for your armies or fleets so go ahead and do that. 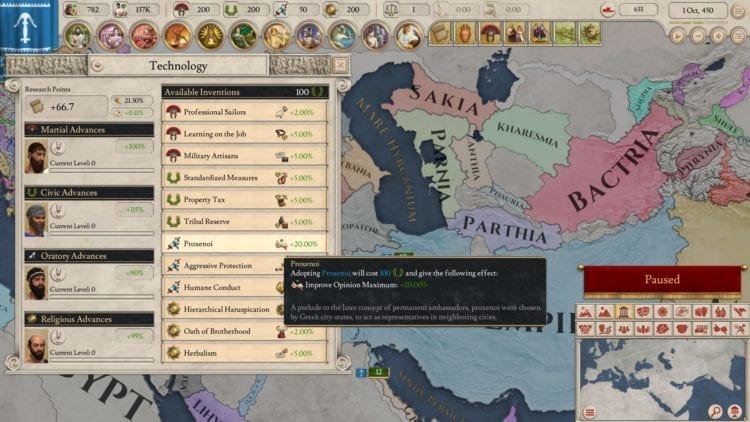 You’ll already have researchers automatically placed in these positions, again, based on power focuses. Like government advisors, you’ll be told when one of them dies so a new one can be assigned. Each invention you select requires 100 civic power as well, and more would fill up that list in due time. There’s also a notification about “bad research ratio” which we’ll get to later. 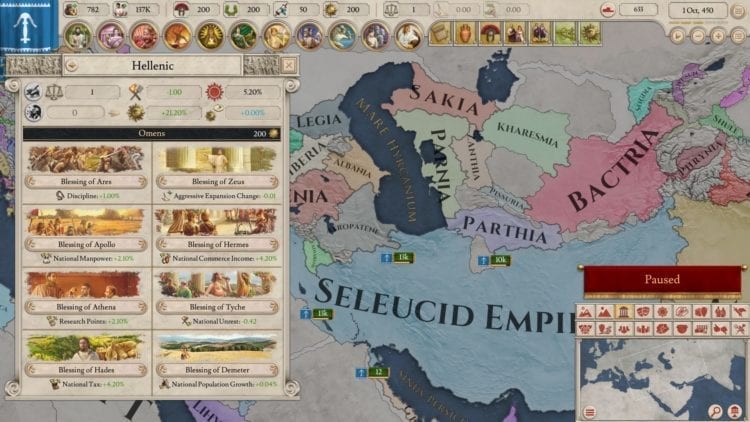 Religion is almost a non-issue in Imperator: Rome. In fact, you’ll notice that you’ll have an abundance of religious power more than others once you hit Imperator: Rome’s mid-game stages. All you’ll need to do here are the following: 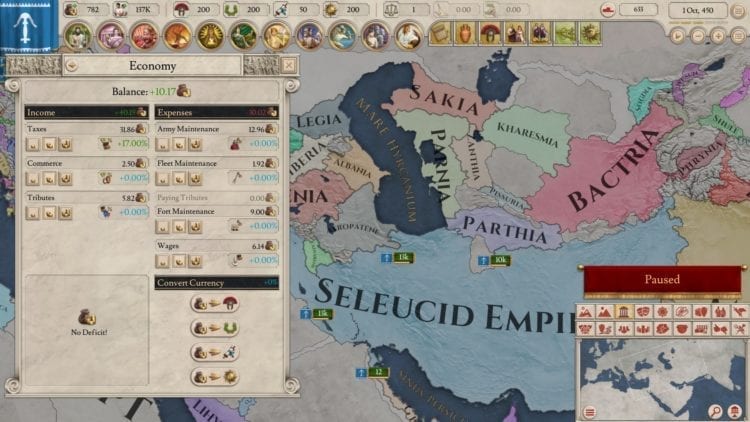 By default, everything’s set to normal levels. There’s almost no reason to make any changes unless you’re strapped for cash. Note that decreasing expenses will have an effect on armies and fleets. Increasing your income, meanwhile, adversely affects your people or even tributary states. You can also convert your extra gold to specific powers. 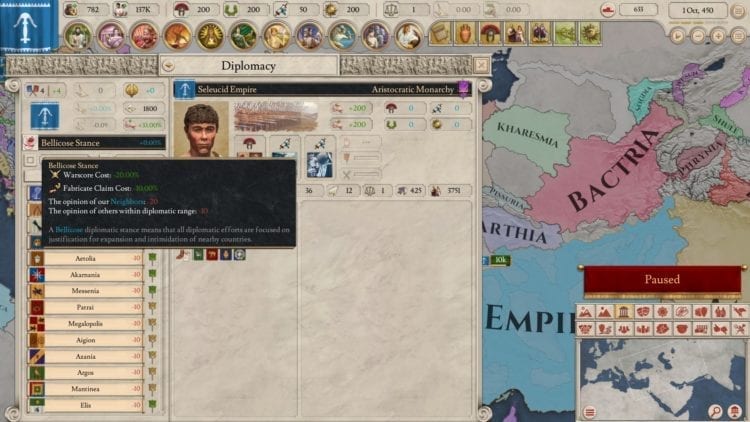 You’ll notice a button on the left side showing your country’s “stance.” This determines how other nations might view you, along with any perks that apply to that specific stance. The default Bellicose Stance is decent in the long run especially when expanding, but neighbors will dislike you for it. If you want to be more peaceful, consider making a switch later on.

Before you unpause Imperator: Rome, you also want to look at your relationships with your other factions especially if you have subjects. The Seleucids have four when the game begins. You can see Bactria in the image below. Use this to your advantage by improving your relations with them and, eventually, integrating their lands as part of your empire. Note that tribal subjects cannot be integrated into your dominions. 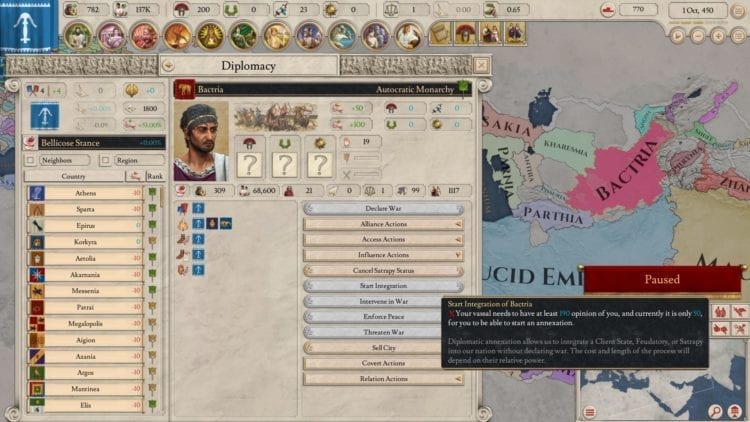 Take a look at your immediate neighbors as well because they will affect your early-game experience. The Seleucid lands are bordered by the mighty Mauryan Empire, but we don’t want to go east. We’re heading westwards so we need to stay on good terms.

You can also choose to gain a bonus to relations by right-clicking on another ruler and trying to make friends. In fact, you have several actions you can do for other characters in and out of your empire. 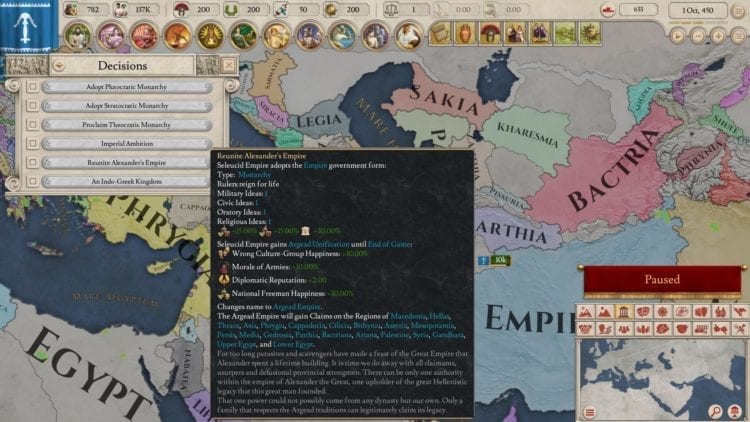 This is just a brief look at the decisions you can make throughout the course of your playthrough. Each one will confer a different type of bonus, slightly nudging you along a path. The end goals for the Diadochi rulers, however, would be to reunite the old lands of Alexander and even form the Indo-Greek Kingdom. 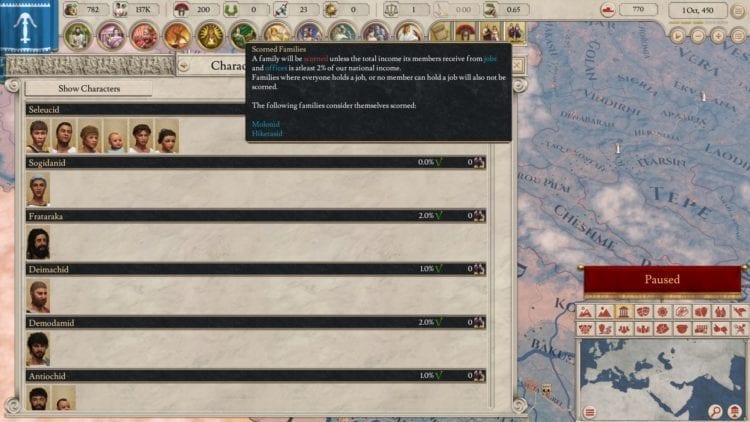 This panel just shows you all the characters in your nation. Here you can also do some extra actions to improve relationships, bribe, and the like, just as you would in other interconnected panels. Some of these characters or families might be scorned, which means they don’t have enough positions in the government to obtain wages. Basically, their unemployment made them unimportant.

You don’t really need to bother too much with Scorned Families if you keep them off positions of power anyway. Plus, Imperator: Rome’s UI might be one of the most unintuitive ones in a Paradox game. If you want to assign jobs for Scorned Families, you don’t even get to see that distinction in the particular job’s panel. You’ll need to mouse over to see if their loyalties have a malus due to being scorned. It’s more work for little rewards. 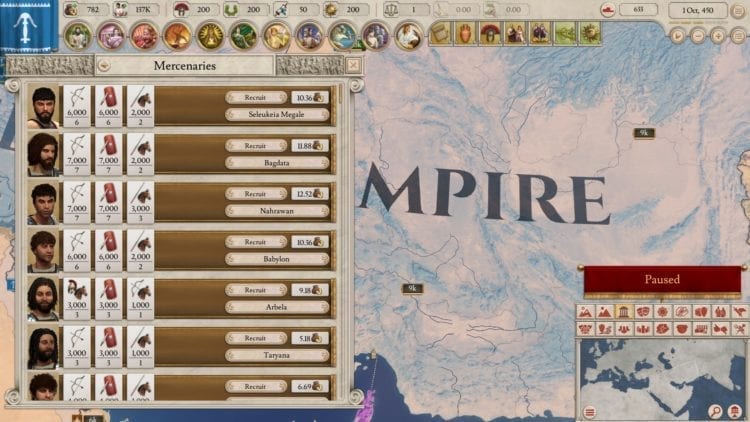 This is fairly self-explanatory. These are the merc companies you’d see idling in various cities. You can recruit them on the map or via this panel. 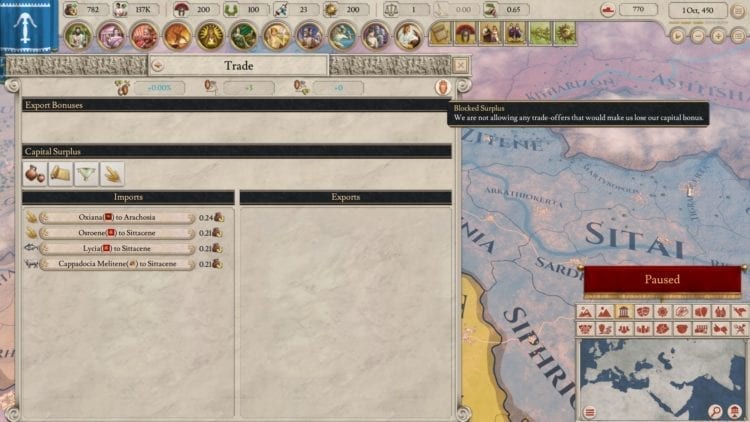 When you start your Imperator: Rome campaign, you don’t have any active trade routes yet so you’ll need to make some (which costs civic power). You also want to use the “Block Surplus” option so you don’t accidentally trade away any bonuses your capital has due to surplus goods. Alternatively, just leave it on so you see those trade offers from the AI, picking the ones that are advantageous.

Each trade resource will have an effect depending on when a surplus exists in a province or in the capital, or when you’re exporting it. Some will improve citizen happiness or output, population growth, and even research rate.

Also, remember what I said earlier about military units? Strategic resources also have noticeable effects. Likewise, having that resource in a city allows you to recruit specific units like war elephants, heavy infantry, and more. 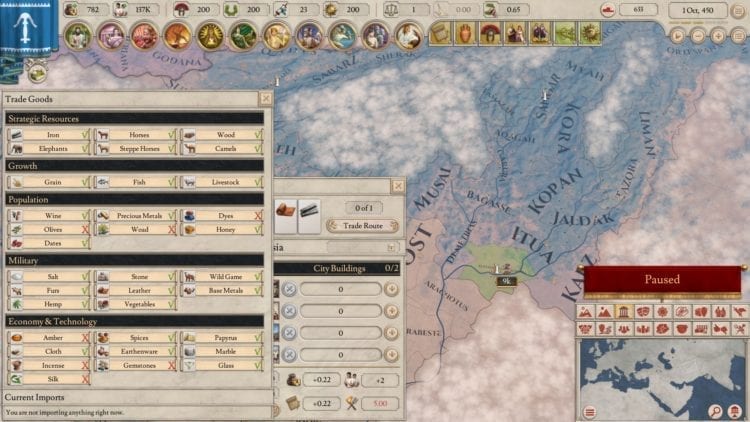 In relation to the trade panel, you might sometimes see a notification that tells you your cities are starving. Starvation is actually related to trade routes.

For the Seleucid Empire, two of your cities are starving once you start your Imperator: Rome campaign. Click on the city or province and you’d see a small icon next to the governor’s portrait. This is your governor’s edict for that province. Switch it to “Encourage Trade” which adds an extra trade route. Then, start importing grain. 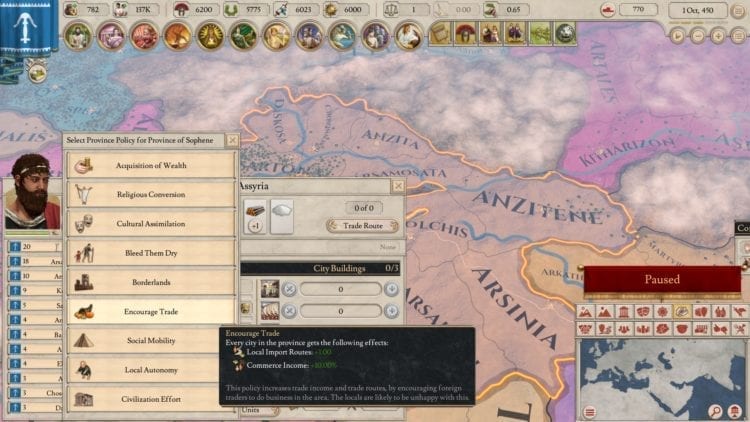 Lastly, take a look at your population in the city’s panel. There may be a negative sign right beside a particular type — citizen, freedman, tribesman, slave — which can cause a malus to your population’s growth. This is also something mentioned earlier regarding the “bad research ratio” notification. It means you have too few citizen-type people in your lands. You’ll need to do a few promotions. 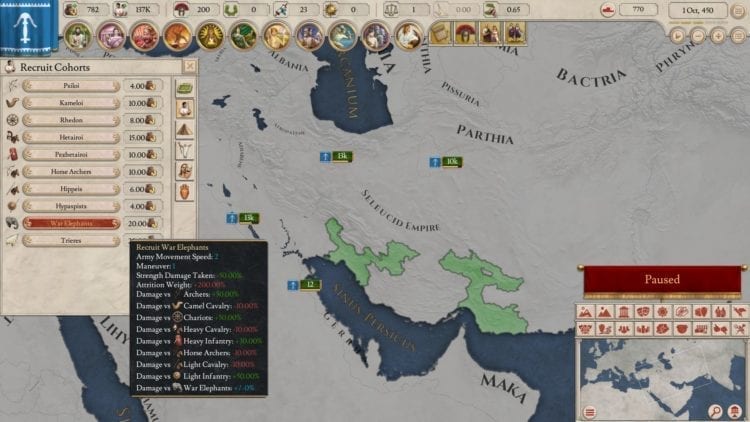 The macro builder’s icon can be found underneath your country’s standard on the left side of your screen. From here, you can easily construct buildings or recruit units in cities.

As for those population promotions, it’s easy to do that when using this tool as well. Conversion and assimilation are not that necessary unless you’re attempting to colonize adjacent territory. You can also make changes to your population’s demographics on each city’s panel. 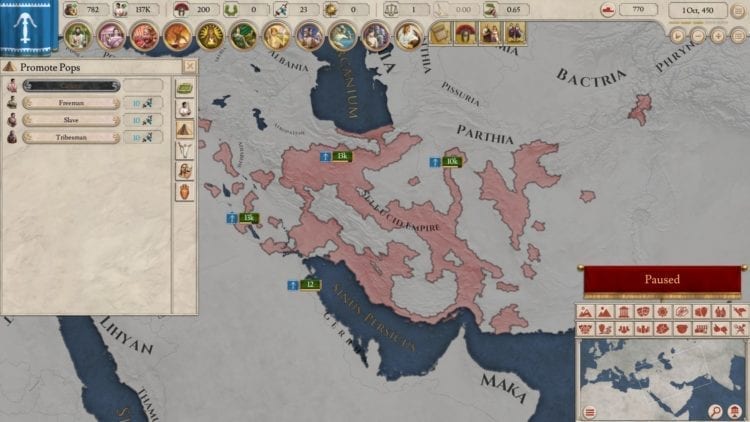 That about does it for our Imperator: Rome guide. These are just some of the basics you need to know about this grand strategy title. Don’t forget to check out our official review as well.

Oh, what’s that, general? What do you need to do next? Well, now you can finally unpause the game.

How Two Studios Are Bringing Back Epic’s MOBA Paragon

By Brielle Bullard2 days ago
Features