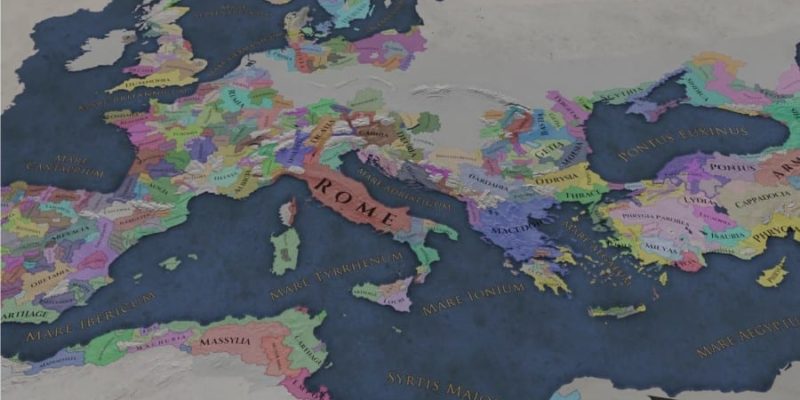 Imperator: Rome marches on. Although we’ve mentioned some issues in our official review, one has to note the sheer number of nations that you can play as during the time period. Hundreds of nations may play similarly when compared to others, but there are those that are just a tad bit more interesting be it due to geographical location, historical factors, or even by design. Consider this as a companion piece for our previous guide on Imperator: Rome’s basics and what you need to do before unpausing. 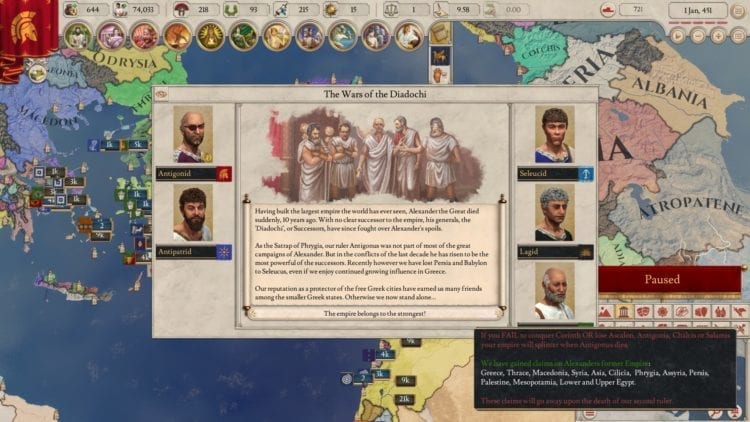 Yes, Phrygia is already listed as an interesting nation prior to starting the game so this might seem moot. What bears mentioning, however, is what makes Phrygia more interesting compared to the other Diadochi factions.

Imperator: Rome starts two decades after the death of Alexander the Great. The conqueror’s demise divided his empire into numerous successor kingdoms. You can pick Egypt led by Ptolemy, the Seleucids led by Seleucus, Phrygia led by Antigonus the “One-eyed,” Thrace under Lysimachus, or Macedon led by Cassander.

I’m kidding about the last one. Always kill Cassander in your playthrough. The murderer of Alexander’s family deserves nothing but death. 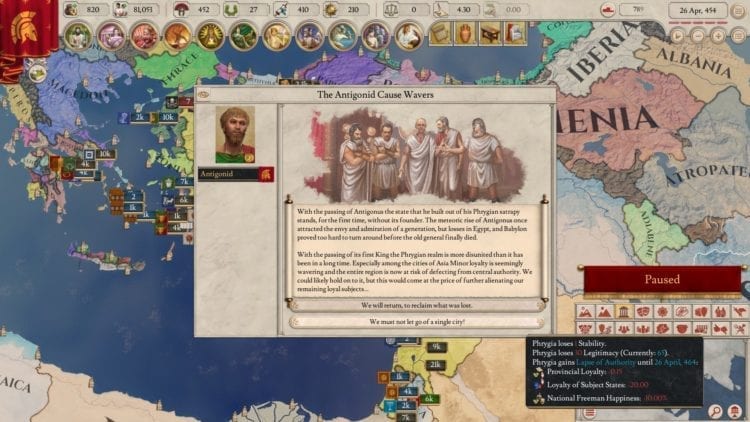 Anyway, all Diadochi factions have claims on Alexander’s former territories. What sets Antigonus apart is that Phrygia will slowly crumble upon his death should you fail to capture Corinth. Historically, Antigonus’ belligerence led him closer to the reunification of Alexander’s lands. Unfortunately, the same attitude alienated the other Diadochi. Antigonus’ death at the Battle of Ipsus in 301 BC led to his lands being swallowed up by other rivals.

After Antigonus’ death at Ipsus, his heir Demetrios managed to assassinate Cassander’s son. This led to the Antigonid Dynasty ruling Macedon until the Roman invasion in 168 BCE. 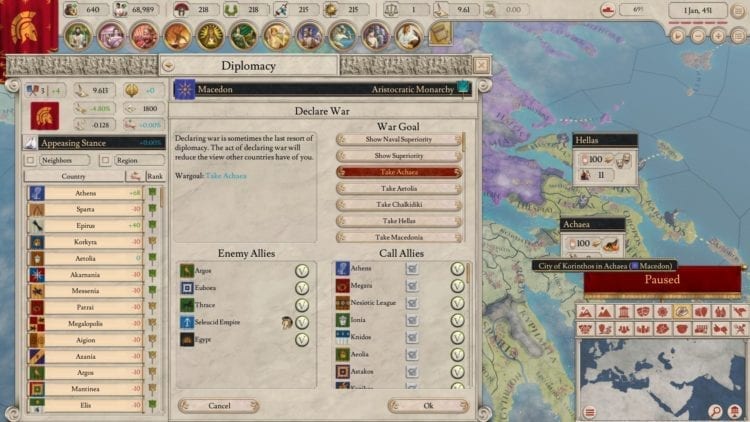 In-game, Antigonus is nearing his 80s. Failure to capture Corinth before his death leads to a decision: Make Pergamon independent, or keep control of your territory. I’m not sure how the AI weighs its decisions, but as a human player, you can choose to pick the latter. Doing so leads to massive drops that affect you internally and externally. It can lead to more revolts, a succession crisis, and your subjects breaking away from your rule (and you have a dozen of them when you start the game).

It’s not like the capturing Corinth would be a walk in the park. The Seleucids and Egypt are guaranteeing Macedon which is, likewise, allied to Thrace. It’s you against the world. 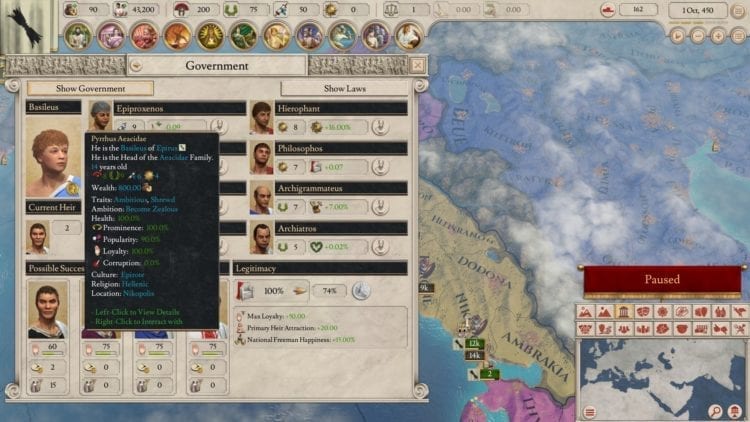 Speaking of you against the world, there’s one reason why you’d want to choose Epirus in Imperator: Rome. That’s all due to its leader, Pyrrhus of mother-expletive Epirus himself!

Pyrrhus was one of the greatest commanders of the age, distinguishing himself in the Wars of the Diadochi before claiming Epirus and expanding its borders. Later, he would face off against a fledgling Rome, dealing them numerous defeats. These battles, however, were so costly that it led to the term “pyrrhic victory.”

He would eventually take on mighty Carthage, taking control of territory in Sicily. Unfortunately, Pyrrhus had a tendency to overexert himself and overextend his ambitions. He soon found himself with few allies and beset on all sides. Towards the end, he made a bid for power in Sparta and Argos.

His death was as ignominious and bizarre as you can imagine. While leading troops in Argos, an old lady threw a brick that hit him in the head. That’s the ancient world’s version of William Howard Taft getting stuck in a bathtub then dying, if Taft ever exuded coolness during his time.

In Imperator: Rome’s start date, Pyrrhus is but a 14-year-old monarch, ready to take on the world. Will you lead him to a grander destiny while averting disasters?

The Greek Colonies Of Iberia 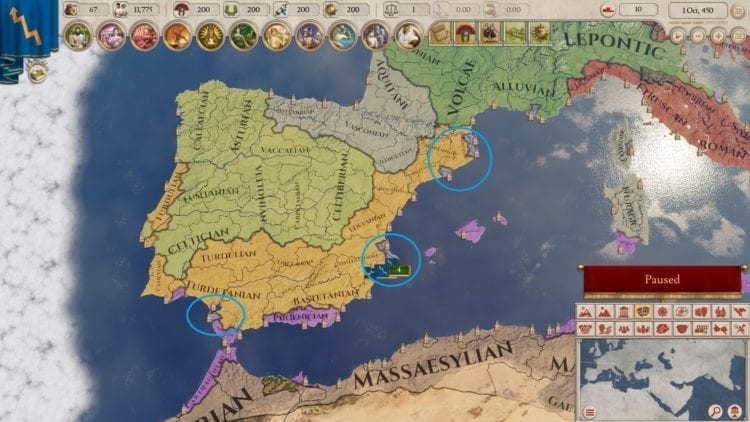 Hellenistic culture is alive and well in many parts of Europe at the time. While I’ve provided some notable examples above, one cannot help but look at the multitude of Greek colonies found around the world. There are lands in Southern Gaul controlled by Greeks, as well as Hellenic followers in the Black Sea.

Likewise, you’ll find some Greek colonies dotting Iberia’s/Spain’s coastline. Surrounded by the Celtiberians following druidic traditions and nearby Carthage, can you ensure that these colonies survive? 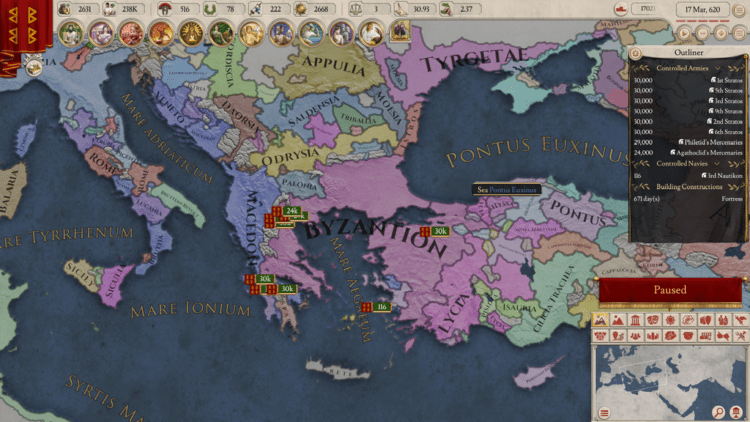 The image above comes from Reddit user Sabttolf. That particular nation is Byzantion which starts out with only three cities straddling the Golden Horn. This would, later on, become the site of Constantinople — or Istanbul, but that’s nobody’s business but the Turks.

Byzantion is interesting due to the location and theme. The standard itself would remind you of the Palaiologid Dynasty’s coat of arms, minus the cross, obviously. Can you create a Byzantine Empire centuries before it came to be in our history? 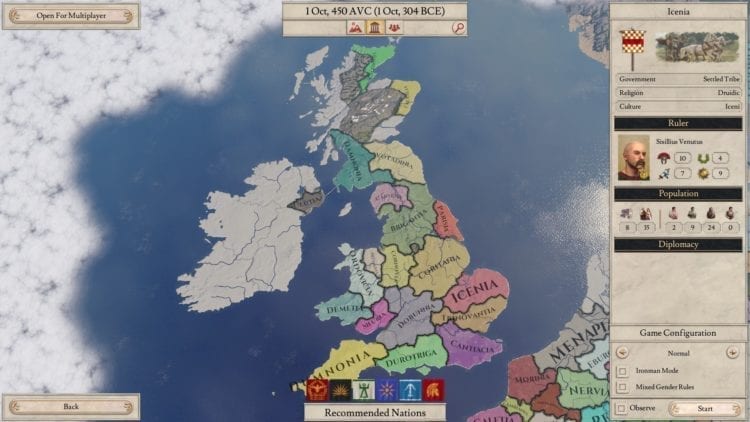 Tribal nations allow for female leaders if they become chieftains of their own clans. You’ll find this out soon enough when you take a look at some choices in Britannia.

So why Icenia in particular? Well, the Iceni were the famed Celtic tribe that once rose in revolt against Roman rule. Their leader at the time was Boudicca. That event happened in 47 AD just past Imperator: Rome’s end date. Still, who knows? Maybe the AI can expand further as Rome just in time to face off against a player-controlled Iceni led by a female ruler. 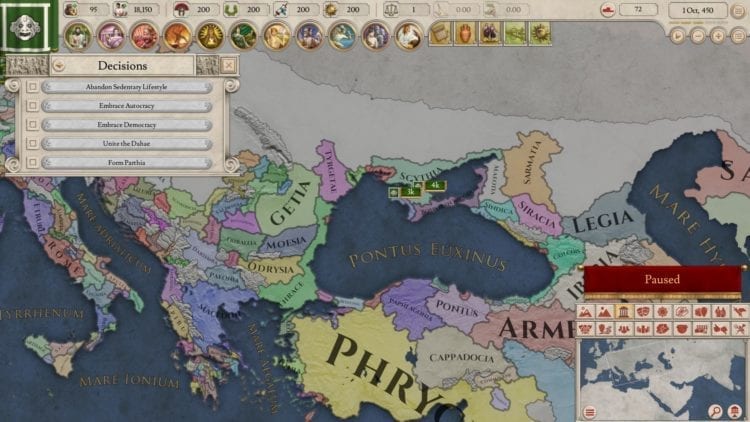 Some nomadic peoples of Central Asia settled in the rich and fertile lands of the Caucasus and the Caspian Sea. One particular tribe came to prominence: Scythia.

In Imperator: Rome, Scythia’s days of glory are long past although it still holds considerable territory backed by its famed horse archers. Other tribal nations vie for power such as Sarmatia and Siracia, and further east are the Sakian and Parnian tribes of Dahae origin.

Scythia starts as a settled tribe. You can, however, choose to decentralize your government to switch back to a migratory one. This allows you to move your populace to new lands. Alternatively, stick to a more centralized government while increasing your civilization level. This eventually lets you choose between a republic or a monarchy.

Later on, you may unite all the disparate Dahae tribes under your banner. Given that you’re also part of the Indo-Persian culture group, you may form Parthia as well (although Parthia, as a nation, is already in the game). 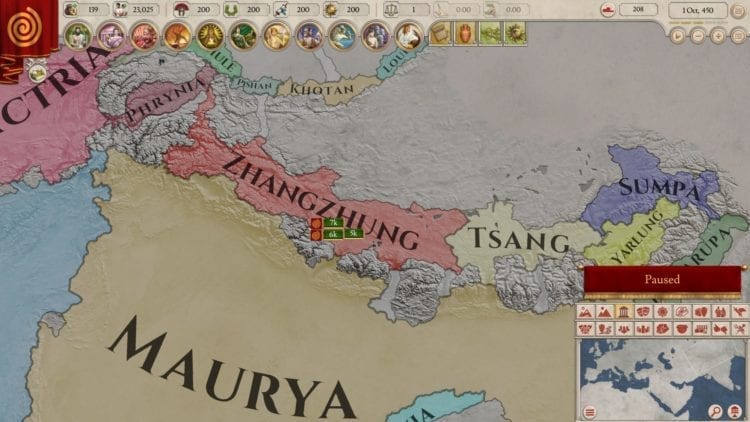 Even further east past Scythia is Zhangzhung. Situated in the Tibetan highlands, Zhangzhung’s an interesting choice due to terrain features. Rather than getting attacked from all sides due to a wide front, Zhangzhung’s dangerous mountain passes funnel in opposing armies (and yours too). Impassable terrain means that you’ll need to figure out how to make your approach.

The biggest challenge you’ll have is the Mauryan Empire under Chandragupta. You’re bordering six cities to the west, while the eastern part of your territory is connected only via three mountain passes. If you do manage to defeat Maurya, go ahead and consider that a fatality. As Shang Tsung says, “Your soul is mine!” 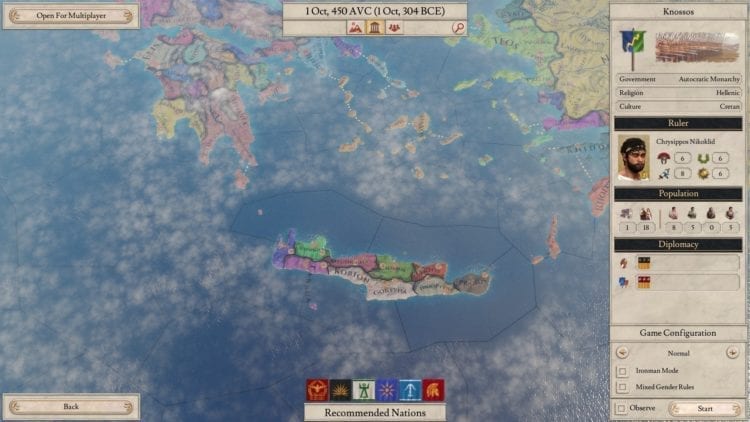 Last but not least, Crete definitely deserves a mention. One can call it tutorial island since you have a handful of city-states and one local power. You’re not bound by pacts with other Greek, Latin, and North African powers at the start.

Knossos is a city-state, but it’s allied with Praisos and has Eleutherna as its subject. Next to it is Gortyna, the sole local power which has Tarrhae as a subject. From here, you can learn more about the game’s mechanics while taking control of the entire island.

That does it for our Imperator: Rome guide on some interesting nations to pick in the game. If you think we might’ve missed some cool choices, let us know.

By Lauren Sayles22 mins ago
Guides

By Tim McDonald2 hours ago
Guides