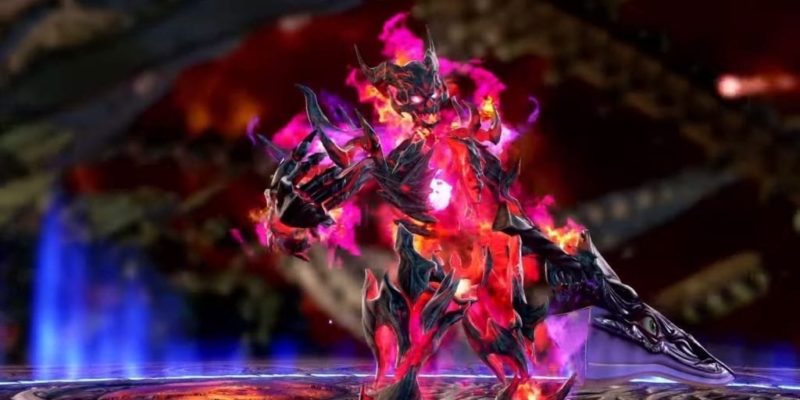 As the soul still burns, so too does the gnarled, smoldering monster known as Inferno. He returns to the fight in Soulcalibur VI, developer Namco said today. The longtime Soulcalibur antagonist shows off some new moves in his latest trailer. However, much of what made him such a dangerous adversary remains the same.

Inferno has been with the franchise for a long time, so it makes sense to see him make a blazing comeback. He once took the form of Cervantes, albeit with more fire, in Soul Edge. A master of all weapon types, he stood as the final challenge in the early Soulcalibur games but slowly phased out. His last appearance, as an alternate costume for Cervantes in Soulcalibur V, was more of an homage.

Now, the fiery skeletal demon returns to blazing glory in Soulcalibur VI. He’s sporting a new look, giving him more of a corporeal, skeletal form. His trailer also confirms that he’s still very much a mimic character, meaning he can use any weapon and fighting style owned by the other fighters. In the video below, he wields the Soul Edge, showing off some impressive new moves.

Inferno is the embodiment of Soul Edge’s will, an evil amalgamation of all the warriors’ souls it has claimed. Its motives for being are unknown. Some say it simply follows a desire to fight, maim, and gather souls. The eerie fire that surrounds Inferno is the result of the many souls the sword has reaped being burned to sustain it.

It’s unknown at this time whether or not Inferno returns to his old role as the game’s big bad. So far what we know comes out of Destructoid, who reported that Inferno can be unlocked via the game’s Soul Chronicle story mode. Apparently, reaching at least level 20 will reward you with an on-screen notification that you have unlocked the character.

One other detail the trailer itself drops, however, is that players cannot use Inferno in the game’s multiplayer mode. Sadly, due to his wildly varying fighting style, Bandai Namco has banned him from the online arena. Sorry, Inferno fans, but it looks like you’re stuck with the LAN parties.

Soulcalibur VI fights his way onto PC as a digital-only download on October 19. For more, check out the official page.

Achtung! Cthulhu Tactics Review – Not A R’lyeh, More Like A R’lmeh

By Otto Kratky40 mins ago
News