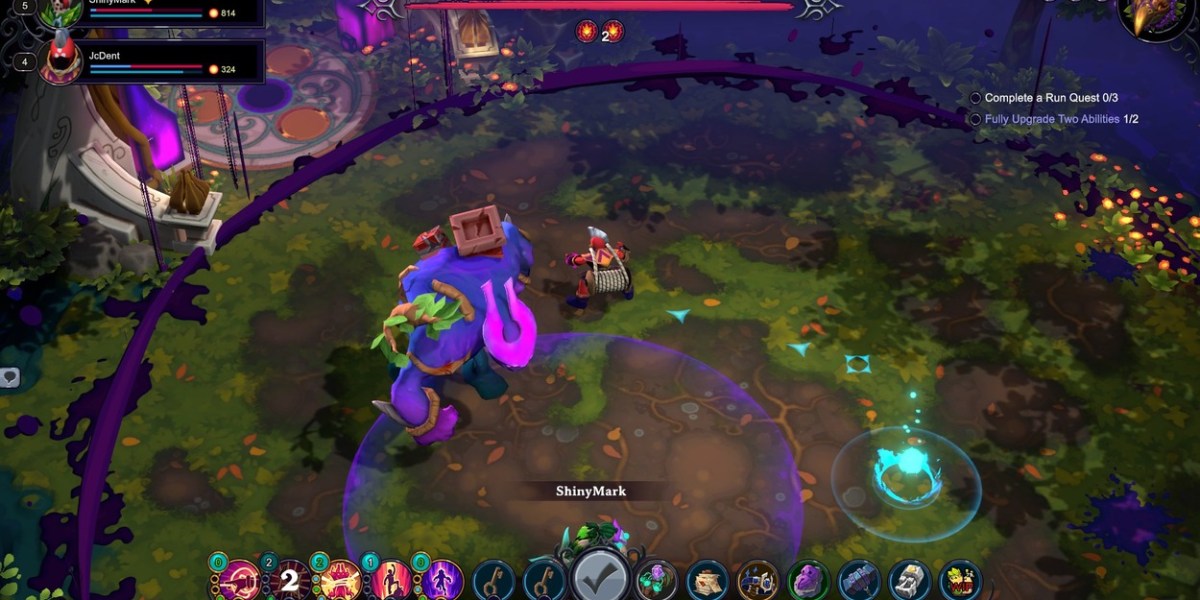 There are fewer gaming truths I can utter with certainty than “I love Monster Train.” I don’t have the best deck builder chops, but I still spent plenty of hours on that relentlessly charming game. Guess what? The developer Shiny Shoe is back, but as I saw during my guided Inkbound preview event, it’s taking decks in a very different direction.

Atheneum is the world in which all the stories ever written reside. But it ‘s under assault by monsters who want to unbind all the stories. You, however, are a newly spawned Binder, one of the many fated to stand against this tide.

Going to throw the proverbial book

Inkbound is a game of real-time exploration and turn-based battles, of roguelike runs through procedurally generated levels, and of stacking, switching, and upgrading enhancements until you become an unstoppable blender. It’s like Monster Train with no cards or units, but with you and your co-op friends. Help, I can’t see my co-op friend through the monsters! Screenshot by PC Invasion

The emphasis on co-op is prevalent in whichever promotional material you turn to. That’s why I had a developer run around in the game with me. I immediately went for the mage class, for I am wise in the ways of CRPG. Turns out, my powers revolved around attaching bonds to the enemies and then using powers that affect those bonds. For example, an explosion that deals 150 damage split between all the bonded creatures. It was great for clearing out the chaff or to wipe out a single bound target.

The developer, meanwhile, took the equivalent of a rogue class character and quickly found that his build had 100% guaranteed critical hits. I felt only a little underpowered.

And while this was a new development for Shiny Shoe, one which they immediately set to addressing and documenting, building a stupidly powerful combo is the core of the roguelike run progression in Inkbound. You’ll be constantly drafting new powers, power upgrades, and items that transform how you and your abilities work. 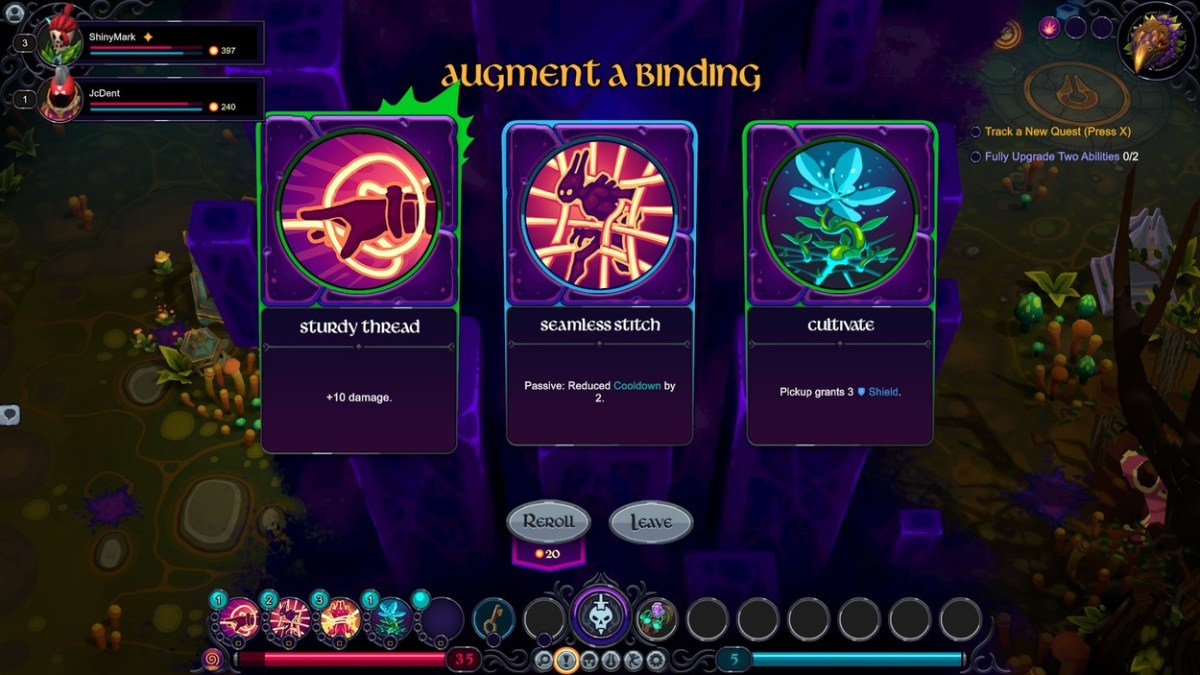 Two of those are upgrades for my core powers, but the plant is something I picked up. Screenshot by PC Invasion

So I immediately beelined for stacking shields to protect my precious health. It worked; I was a very shielded mage.

The battles in Inkbound aren’t simple turn-based ARPG affairs. First of all, you don’t just run into enemies anywhere. They’re found in arenas that all players have to agree to activate. Then the enemies of all storydom come in waves — you’ll often know where they’ll spawn.

Oh, and so you wouldn’t back into a corner (which is already hard to do in a round arena) and cheese it with your powers, the arena shrinks. The black border isn’t the instant battle royale death, but you become a lot more vulnerable in it. Some enemies can be a little more literature-based than others. Screenshot by PC Invasion

It’s a good thing that the players act first in Inkbound — and act at the same time. Instead of waiting one by one to walk their three squares and launch their one attack, the players can mill around and spend their action points freely. A single action point (AP) gives you a certain radius to freely move around. It’s a lot more freeform than you’d expect.

At the same time, you and your friends will always see where the enemy attacks will fall. This mean that you can coordinate actions to get out of the way, and maybe cause some red-on-red fire. After all, Monster Train was full of enemies that didn’t play by the rules. So it was that I saw some foes that acted after a set amount of player moves or changed the attack direction based on who attacked them last. You have to make sure that your hasty maneuvers don’t imperil your teammates as well.

All in all, a single run of Inkbound will allow you to traverse three books. Each book will have its own biomes — jungles, port markets, even weirder stuff — and you’ll eventually have to beat a big boss. And a new book can be chosen at the end of the previous one, so you’ll have a lot of choice when it comes to variety. 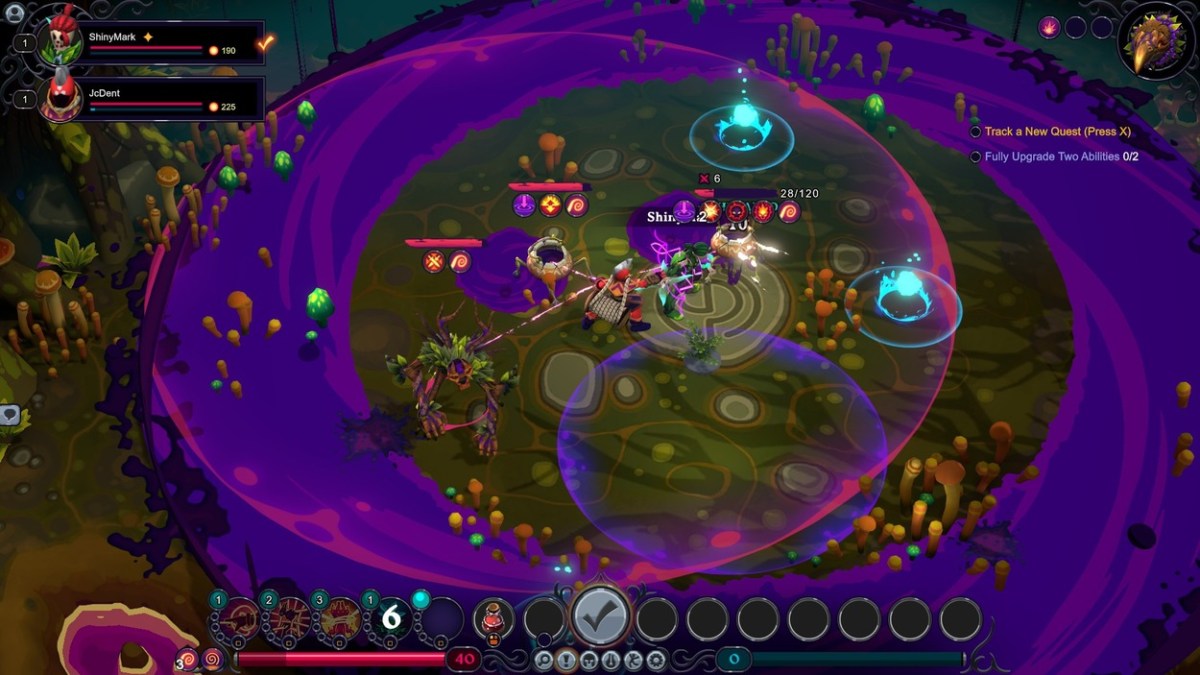 There’s a reason why none of these screenshots look like they’re from a turn-based game. Screenshot by PC Invasion

And variety is what we’re getting promised. Shiny Shoe maintains that Inkbound will be constantly supported by new, free content: new biomes, new enemies… the works. At the same time, the players who want to spend more money Inkbound will have the chance to buy cosmetics, what I call the only ethical monetization model. Cosmetics will be just that: major swag, and no money will be paid for stuff that gives you gameplay advantages.

If you’ve played Monster Train, you already know that the studio has the chops to produce great cartoony art. Shiny Shoe continues bringing its A-game to Inkbound, and you’ll find yourself zooming through beautiful worlds.

All in all, Inkbound seems like it will be a nice game. And so long as you have a couple of friends, you should have a fun time crushing the enemies of all your favorite stories. That and I hope that a joke I made about a cosmetic during the demo will make it into the final description.

Garganacl weaknesses and best counters in Pokémon Scarlet and Violet

Pokémon Scarlet and Violet: How to make a Dragon Shiny Sandwich