Intel 13th gen CPUs are here, bringing another generational improvement to gaming and more flexibility for content creators than before. Consider it an enhanced version of last year’s revolutionary Alder Lake Hybrid core design that mixes high performance cores and efficiency cores on a single die. The high clock speeds are sure to turn heads, but there’s more to Intel’s codenamed Raptor Lake lineup than just that. In this review of the i9-13900K, we’ll cover Intel’s major architecture changes, what to know about the specs and platform, how the gaming performance stacks up, and if it’s worth the cash.

The CPU market competition is fierce now thanks to AMD’s Ryzen 7000 Series. However, it’s interesting to consider that both Intel’s 12th gen and AMD’s Ryzen 5000 are still excellent processors for gaming while being more affordable. This raises the question of whether or not it makes sense to buy the latest gen from either company. While AMD appears to be struggling with selling its overall platform as worthwhile, Intel’s Raptor Lake lineup does feel more compelling at the moment.

Buyers not only have the options of purchasing compatible, but cheaper, last gen B660 and Z690 motherboards with nearly the same features. DDR4 memory is also compatible with these CPUs, meaning you can reuse any decent DRAM you already have. Cooler compatibility is another thing that’s already solved, because you can get LGA 1700 adapters from major manufacturers which only cost a couple dollars. You can potentially put together a high-end Intel i9-13900K system for far less money, and it’ll run great. Alternately, you can splurge some cash and get Z790 and DDR5 to get some of the latest specs for a system that’ll age a bit more gracefully.

The point is that you have more options for your budget with Intel 13th gen, though AMD might have Intel in the long run. We’ll discuss that more later. Let’s talk differences between Intel’s 12th and 13th gen CPU lineups now. 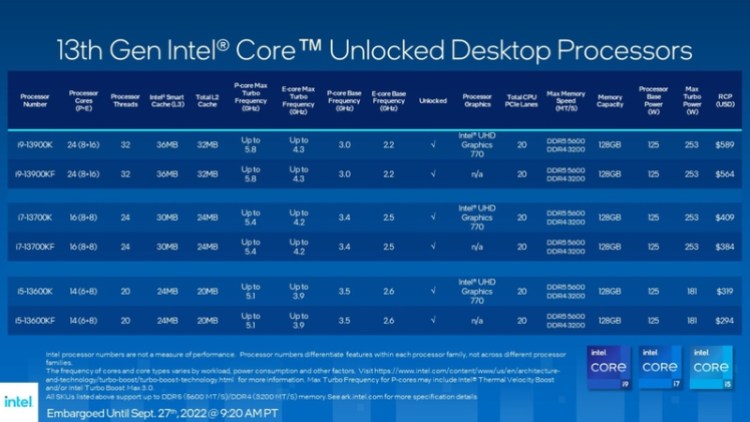 As we already touched upon, Intel’s 13th gen Raptor Lake CPUs are like enhanced versions of Alder Lake in simple terms. It’s based on the same Intel 7 manufacturing process, albeit improved to support things like higher clock speeds. Additionally, the same Hybrid architecture approach combines higher performance, low latency P-cores with low power, compact E-cores. This allows Intel to deliver strong performance to users, while content creators get more multi-threaded performance without the excessive power consumption needed for the P-cores. It’s essentially a win-win for both parties in that regard.

This time around, Intel’s adding even more of those E-cores to models across the whole lineup. It’s a clear value add for users who need more multi-threaded performance. For instance, the i7-13700K now sports four more E-cores to basically match the previous gen i9 without that added price markup. P-core counts remain the same across the lineup, but again, frequencies are up. Most games can’t even benefit from more P-cores due to design, so increased frequencies along with some other changes lend to the increased framerates for games new and old. In the case of the i9-13900K, that’s up to a 600MHz increase in a single generation, and something that will reflect in gaming performance if Intel’s claims hold true. 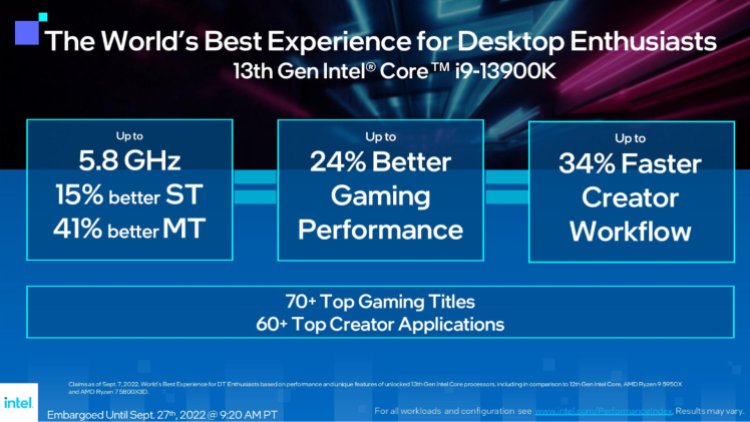 As for those other changes, Intel did tweak each of the core architectures. The P-cores are now referred to as Raptor Cove cores, but the E-cores are still known as Gracemont cores. Users will be pleased to know that Intel doubled the L2 cache for the 13600K/F, 13700K/F, and 13900K/F models. This is another thing that games will benefit from, which is clearly evident with AMD’s 5800X3D CPU that featured lower clock speeds, but tons of extra L3 cache.

Overall, this Hybrid core design allows Intel 13th gen processors to allocate more resources towards producing higher framerates, while also keeping the system running smoothly overall. To help Windows send these tasks to the right cores, Intel created the Thread Director scheduler, which was designed for Windows 11. You can still use Windows 10 with 12th gen Intel processors should you wish, but Intel has optimized the design to work with Microsoft’s “latest and greatest” OS. Intel also states that the scheduler is on revision two for Raptor Lake, though the company has not been forthcoming with details about the improvements. The hope is that games will eventually be able to utilize E-cores as well to offload more tasks from the P-cores, but the higher latency E-cores are not useful for games yet.

All of this comes at similar prices to 12th gen Alder Lake CPUs, but some segments like the i5 will cost more. According to Intel, i7 and i9 pricing will be the same. We’ll have to see how this translates to retail pricing. On paper, Intel 13th gen Raptor Lake CPUs like the 13700K/F and 13900K/F models will offer more gen-to-gen value for the performance you get. 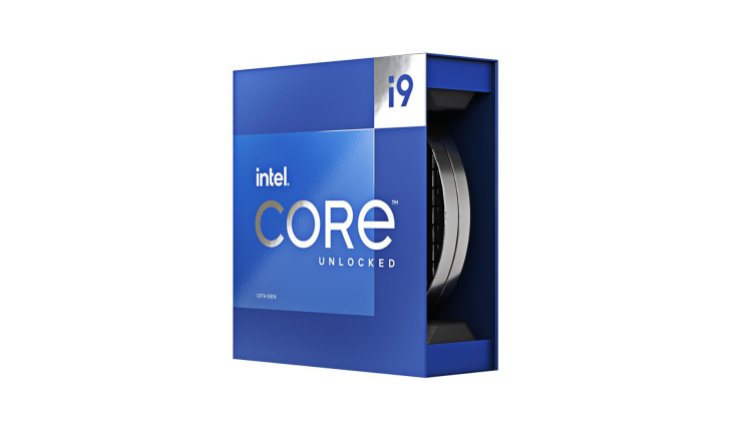 Refer to the chart below for the full spec sheet. The important things to take note of are the increased max frequencies and the doubled L2 cache amount versus the previous gen i9. These two spec improvements hold a strong correlation with gaming performance both for average framerates as well as those pesky 1% and 0.1% lows we often call stutters. There are still eight P-cores, which is more than enough for modern games, but Intel did double the E-cores to 16 which will help a lot more with managing background tasks and streaming so as not to burden the P-cores and hurt game framerates.

Maximum power consumption is also slightly up, and Intel now officially supports DDR5 5600, which is a decent jump from previous-gen support at 4800. However, you can still use XMP 3.0 for DDR5 up to 7600. The last thing to note is PCIe support remains the same from last gen. There are 16 PCIe 5.0 lanes that can go to the graphics card slot along with four PCIe 4.0 lanes for an SSD. The rest of the connectivity depends on the chipset and motherboard you choose. We will discuss the significance of the PCIe configuration options in more detail near the end of this review. You can find additional specs about the 13900K on Intel’s Ark database.

Our test system consists of a high airflow case, with all fans and the liquid cooler running on the iCUE “Balanced” profiles to produce realistic performance benchmarks for average users. For our testing, we used Windows 11 per Intel’s guidance to coincide with the Thread Director technology that improves utilization of the Hybrid core design. Windows 11 is now generally considered stable and ready for widespread adoption, and we haven’t encountered any issues since adopting it last year for our Alder Lake 12th gen review. However, users can still use Windows 10 for Intel 13th gen CPUs if desired.

For basic power and frequency settings, we allowed the ASUS ROG motherboard to deliver up to 253W to the CPU if requested, enabled the ASUS AI auto-OC tool, enabled XMP 3.0 on the Corsair Vengeance DDR5 memory, enabled Resizable BAR, set the Windows power plan to “Performance,” selected “Prefer Max Performance” for the EVGA RTX 3070 Ti FTW3 Ultra in the Nvidia Control Panel, set an aggressive fan curve on the graphics card, and set the H150i Elite to the “Balanced” preset in iCUE. All other settings were set to default or automatic.

Software can also easily skew performance data, so we’ve organized a basic profile of what our test system looks like. It’s a daily use system, but we were careful to close all unnecessary programs before gathering data. We intentionally left a few common gaming applications and background processes running though to simulate real use cases. These include the critical Windows 11 applications, a single tab instance of Google Chrome, Corsair iCUE, EVGA Precision X1, the necessary associated game launcher, and Discord.

There are also some additional notes about the performance metrics we gathered. We acknowledge that the RTX 3070 Ti GPU and DDR5 4800 create bottlenecks on this system, but these tests also seek to show what this CPU is capable of without the most expensive components on the market. We also tested the games on low settings to mitigate the GPU bottlenecks for our power consumption tests and provided the framerates for reference. Peripheral polling rates can also affect performance. For the majority of our tests, we used standard 1,000Hz polling rates and reserved hyper-polling for a specific section of the review which is noted under “gaming and multi-tasking.”

Raptor Lake is an impressive and efficient architecture for gaming. It can handle huge framerates if you have a graphics card to pair with it, but you'll need to spend big on your whole system to unleash the 13900K's top-tier performance.