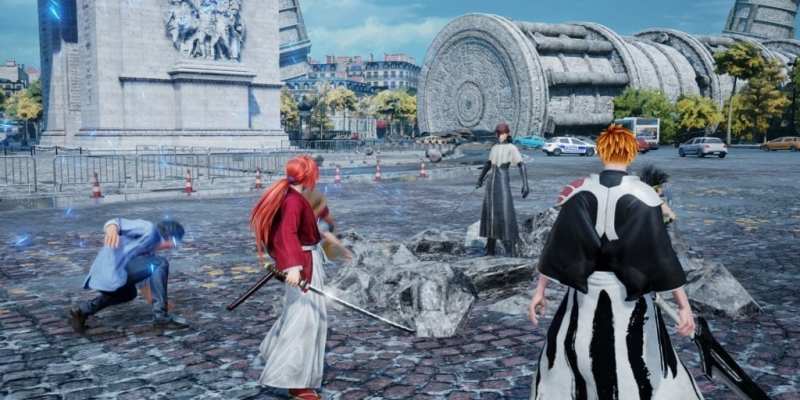 Jump Force is the sort of thing that, a decade ago, would have surprised me with a western appearance. A fighting game mashing together characters from all across the Jump manga series – Naruto, One Piece, Dragon Ball Z, and more – is plausible enough.

Then you factor in that most of these franchises are translated and distributed by different companies in the west, and legal hell begins to ensue. This, I think, is why we’ve largely missed out on Jump games… at least until the slightly rubbish J-Stars Victory VS.

We’ll get into the nitty-gritty of what it really is in a full review once I’ve finished it up, and the online play is more populated. For now, what you need to know is that Jump Force is a fairly simplistic arena fighting game that lets you punch Goku, Luffy, and Naruto in the face, with a user-created avatar if you so desire. Now: let’s get into the nitty-gritty of the PC version. 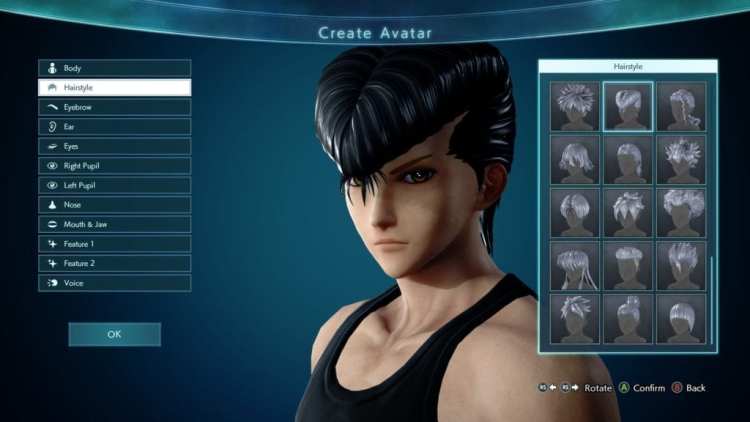 Your avatar can have a really cool pompadour, so that’s +1 for Jump Force.

Jump Force Of Your PC

Jumping Into How It Looks

With the specs out of the way, let’s look at what we’ve got in terms of graphical options. 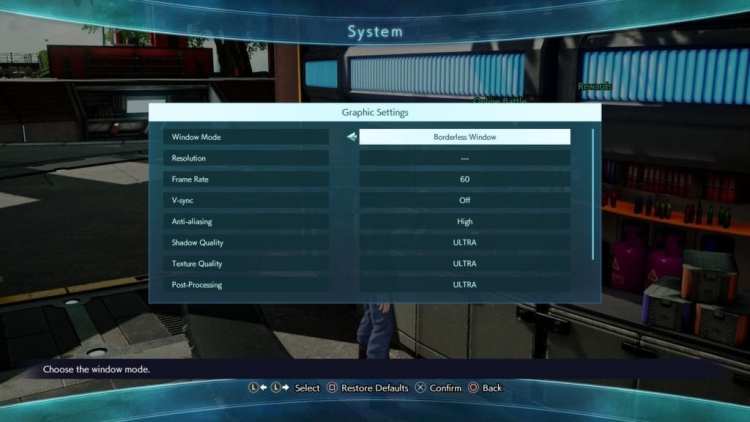 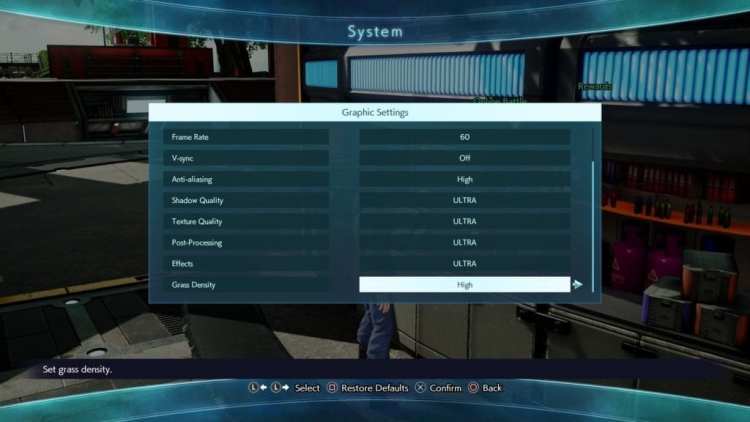 Not terrible, but there are some glaring omissions. Borderless window is always nice to see, at least, and every option – with the exception of Anti-aliasing and Grass Density – goes Low/Medium/High/ULTRA. V-sync can be enabled or disabled at a whim, and you can cap your framerate at either 30 or 60. No higher, I’m afraid, but that’s not much of a surprise for a PC port of a console-focused fighting game.

I do have issues with the very nebulous “Post-Processing” and “Effects” options. I’m still not entirely certain on some of what they turn on or off on different settings, barring some very, very obvious changes, but my biggest problem is that motion blur is tied to Post-Processing. In fact, motion blur appears to turn up if you have Post-Processing set to anything above Low, which gets us screenshots like this: 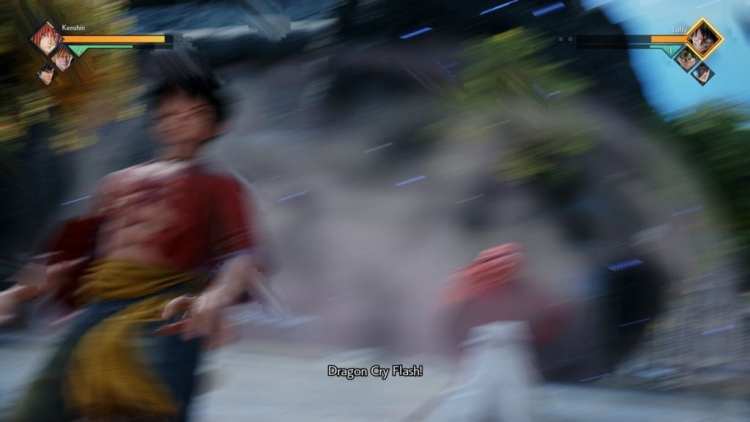 3D glasses not required, I promise.

Post-Processing is also responsible for some other very, very important visual effects. Let’s have a look, shall we? It’s very difficult to get identical maximum and minimum settings in a fast-paced fighting game, but I’ve done my best to get some reasonable comparison shots. 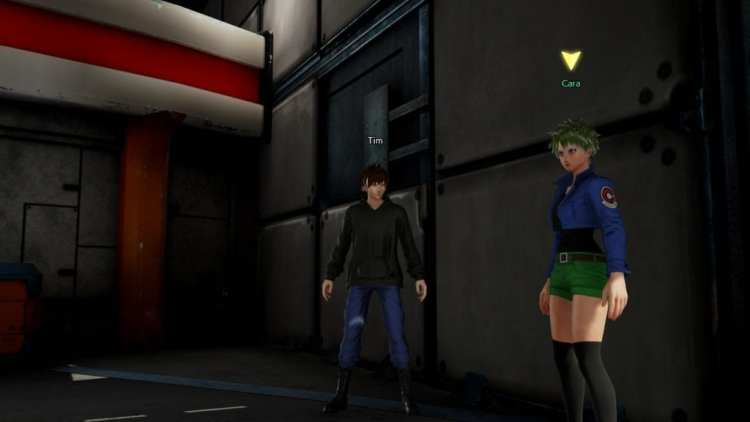 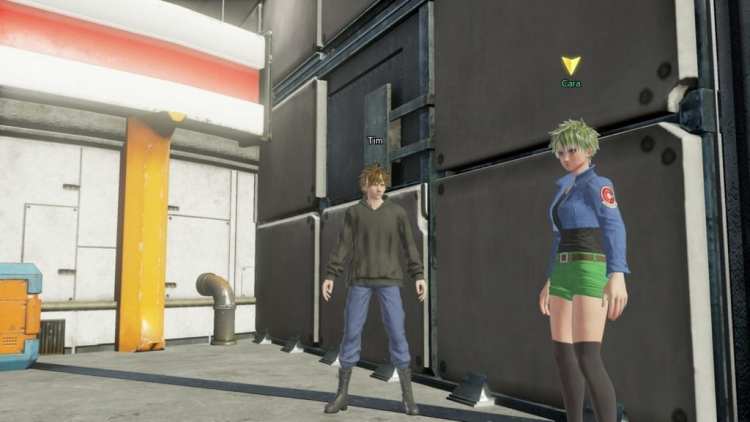 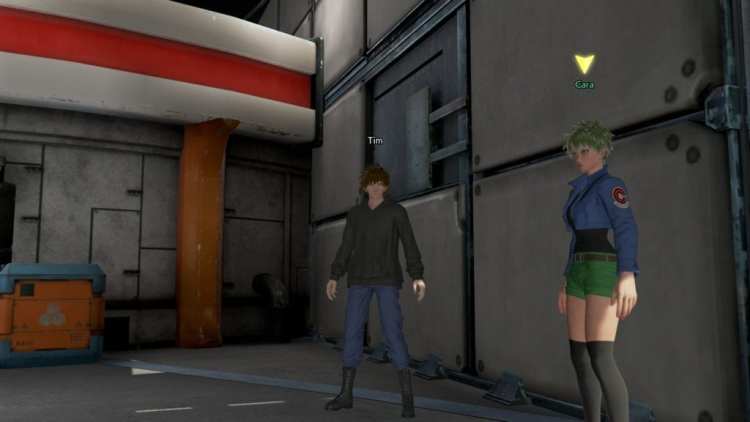 Maximum settings with post-processing off. 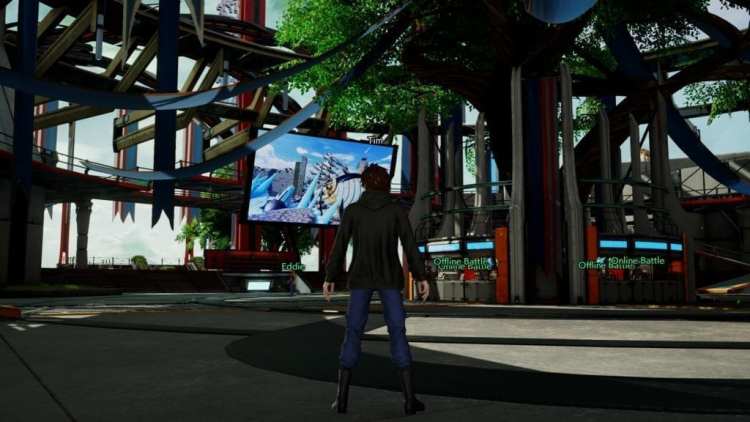 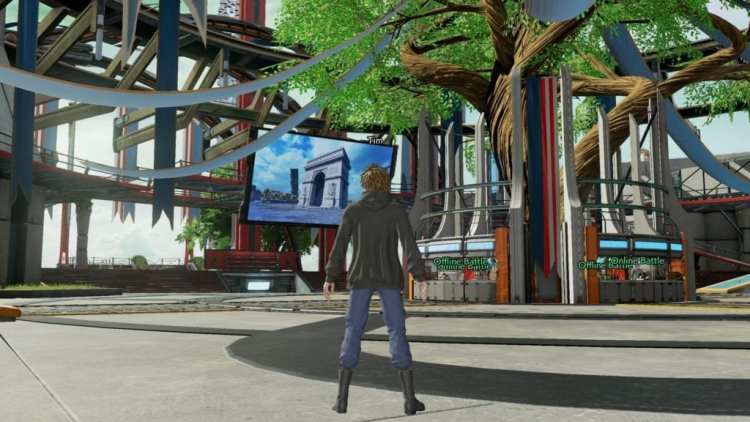 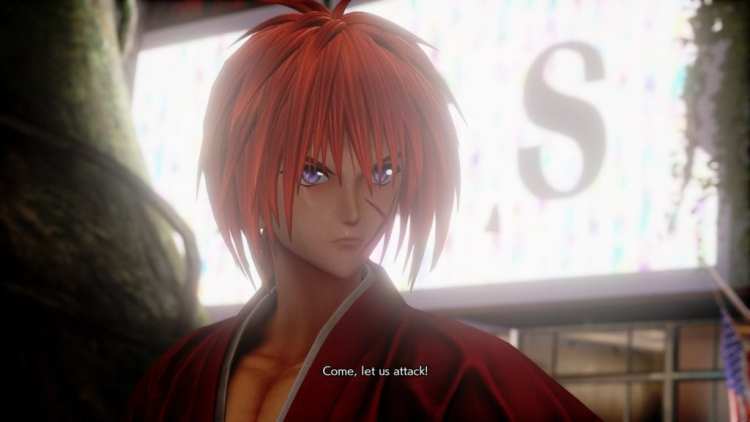 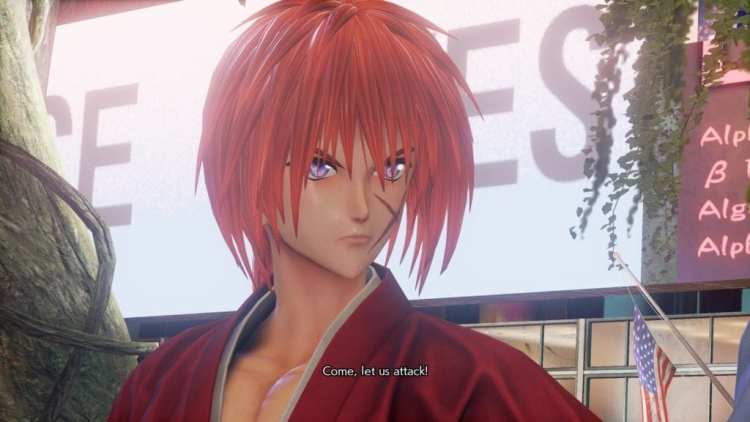 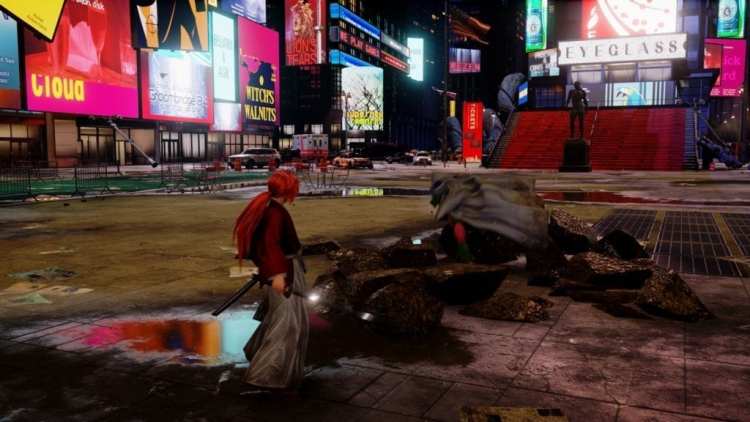 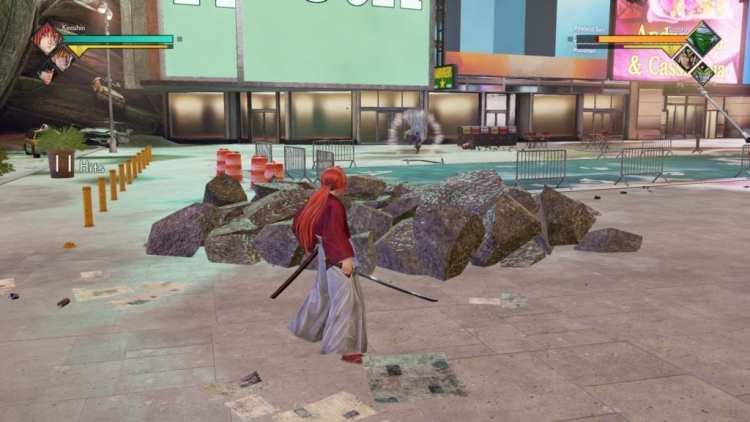 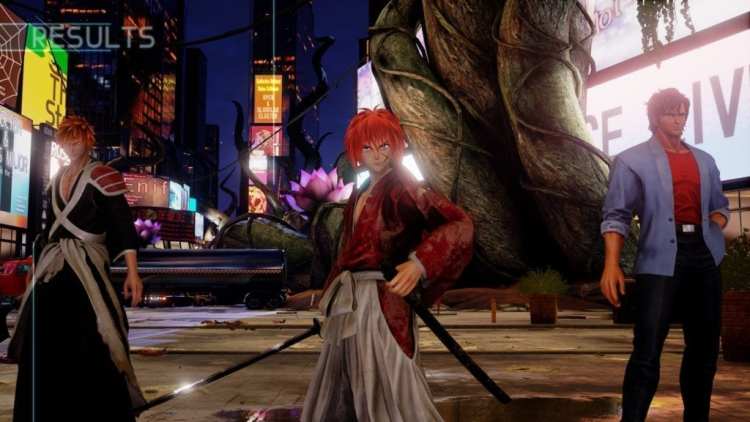 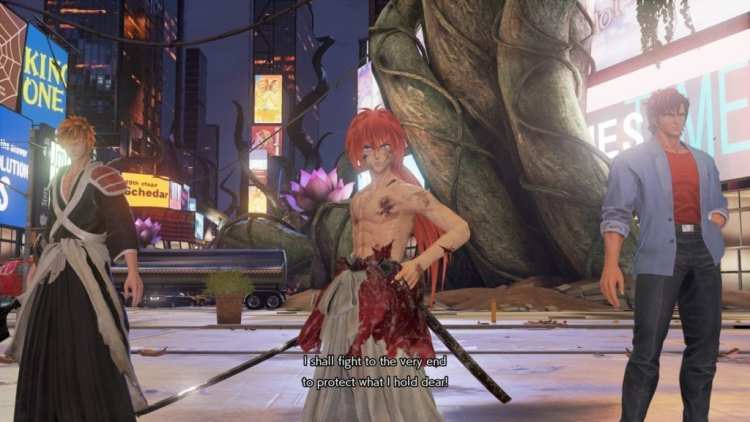 Minimum settings. Please note that Kenshin’s top is not shredded because of the settings, here. The game doesn’t have difficulty rendering it on minimum settings or anything.

The difference is almost literally night and day, especially in the two screens I took in the lobby area. Shadow quality definitely plays a part there (as setting that to Low pretty much turns off all environmental shadows), but Post-Processing is responsible for the brightened, washed-out look that appears to desperately need a contrast adjustment. In short, while you might want to turn that off to get rid of motion blur, you want to turn it on to make things look… well, normal. An unpleasant trade-off. On the plus side, characters look pretty good regardless of settings; on the downside, the environmental details take a huge hit if you lower them. The weird lighting, significantly weaker ground textures, and lack of reflections do a lot to hurt the way Jump Force looks.

In terms of frame rate, drops were generally non-existent. I had a stable 60 FPS throughout all gameplay, with the exception of the lobby area. This was also usually stable at 60, but when online, hordes of players roaming around could drop this by 10 or so. Changing my graphical settings didn’t appear to impact this, though: it happened with about the same frequency no matter what. 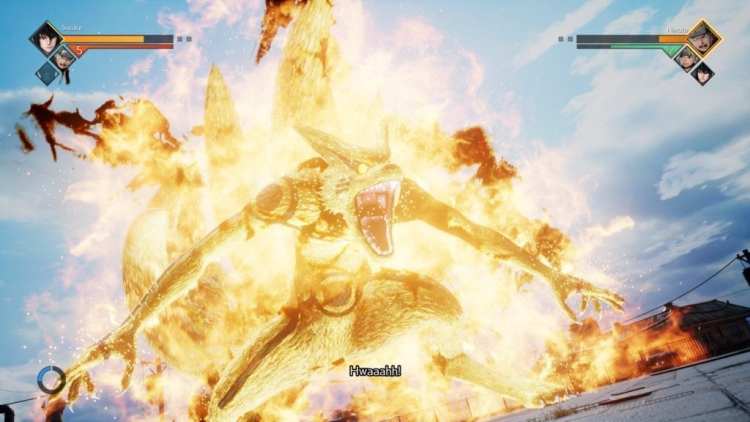 Predictably, each character’s ultimate attack is wonderfully bombastic and over-the-top.

Online play is also something we should talk about. Until launch, it’s going to be hard to talk about netcode and stability with any degree of accuracy, but my pre-launch experience has been mixed. I haven’t had any issues finding or playing games. Lag hasn’t been a problem that I’ve noticed, though there are some moves (fast dodges and counters, in particular) that rely on perfect timing. I’m crap at these regardless, so it’s hard to tell if lag is impacting my ability to pull them off.

What I have noticed – and what is troubling – is the rate with which I lose connection to the servers.

When you load into Jump Force, you can choose to play either online or offline. Offline lets you access the in-game shops, play against the computer, go through the story mode, and the like. Online has all of the above but also has roaming players in the lobby (who you can challenge), online play, events, log-in rewards, and more. Online, really, is the way to play. 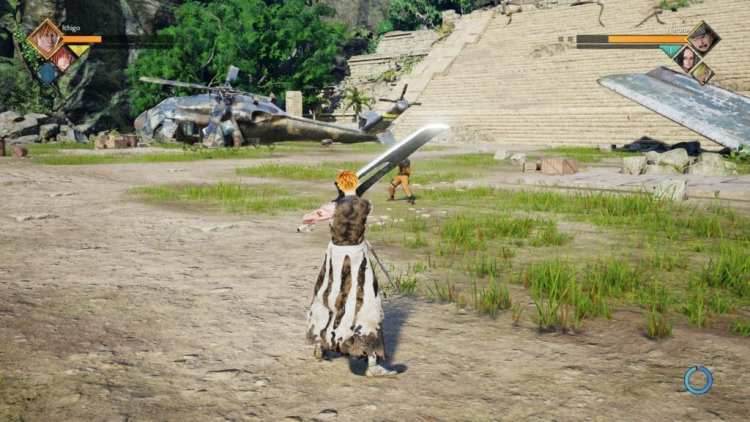 Personally, I’m hoping that the DLC adds in some less obvious characters from series that don’t currently appear in Jump Force.

Except that Jump Force routinely loses connection to the servers, kicking me back to the main menu without saving my most recent bit of progress. I might’ve won a round in a battle, or possibly just finished a battle, or done some reconfiguring of my abilities, and then CONNECTION LOST. This happened with enough frequency that I’m now largely choosing to play offline.

There are two possibilities! One is that this is still technically pre-launch, so maybe the Jump Force servers have some kinks that need working out. The slightly more worrying alternative is that the servers are getting slammed by people already, and this is only going to get worse at launch.

Jump In With A Gamepad

We should also talk about controls, but I’m going to keep that relatively brief because this is an arena fighting game, and everyone should be using a gamepad of some sort. This is actually playable via keyboard, if only because the right stick has basically no bearing in actual fights thanks to the automated camera, so you only need two hands. So, hey, if you really want to, you can use your keyboard. You’ll need to do some redefining, and the game will not give you keyboard prompts, but it’s possible!

The better option is inevitably a gamepad, though. Happily, Jump Force gives you a manual selection as to whether you want Xbox or PlayStation prompts, so you’re not stuck with one (or reliant on Steam’s occasionally iffy controller type autodetection).

Jump Force-d To Discuss This 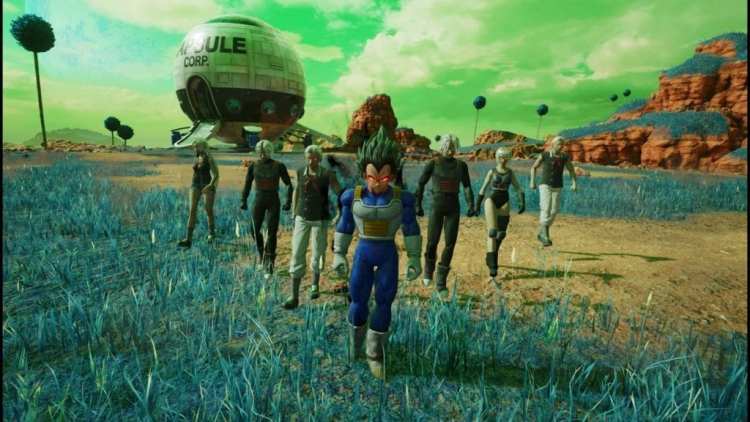 This cutscene is 90 seconds of Vegeta staring at people until a cube floats up behind him. Then his eyes turn red and he slowly walks forward. 90 seconds.

That’s all of the PC-specific technical stuff out of the way, but we should probably address the elephant in the room: those cutscenes.

If you’ve been paying attention to Jump Force stuff over the past week, you’ve probably seen a lot of people complaining about the cutscenes. Justifiably. In most of the cutscenes, characters are basically cardboard cut-outs who will occasionally shift to a new position or possibly float off-screen, if they move at all. Much of the dialogue is unvoiced, and the few animations that occur tend to be almost hilariously stiff. I’m still early in the campaign so there’s time for things to improve, but I’m not holding my breath.

What’s odd is that the rest of the game is frenetic, flashy, and beautiful. While the cutscenes have less emotion in them than your average sack of bricks, the actual combat is gorgeous and full of personality, especially if you have any affection for these characters. So while the cutscenes are certainly a Thing, they also shouldn’t be your main focus if you’re looking at Jump Force. 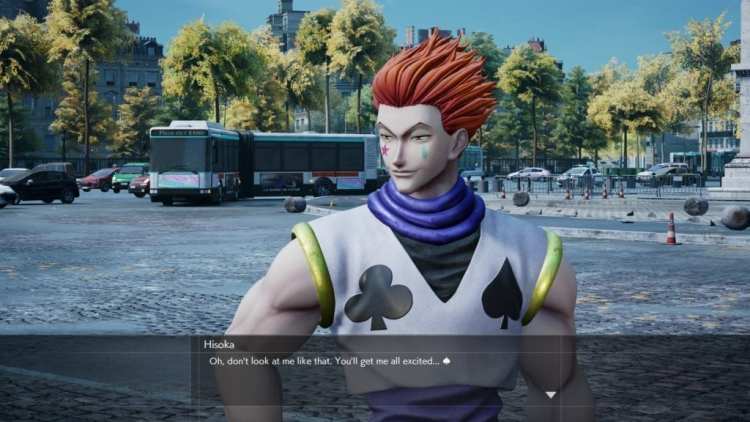 I’m possibly one of the few people who’s pleased to see the incredibly creepy murder-clown Hisoka make a playable appearance.

You could also complain about the character designs, which look somewhat like animated action figures… but honestly, I kinda like it. Some of them look a bit off, and the mix of styles can occasionally look a bit jarring, but they’re generally solid representations of the characters. Quite impressive, considering the varied art styles from their source material.

So: a solid, if uninspired, PC port. Nothing much to complain about port-wise – short of the lumping together in Post-Processing and Effects options, and what may or may not be server issues, at least. If you’ve got a gamepad, Jump Force‘s jump to PC appears to be a perfectly decent version. There’s a lot I want to talk about game-wise, but for that, you’ll have to wait for the review.

By Andrew Farrell20 hours ago
Tech