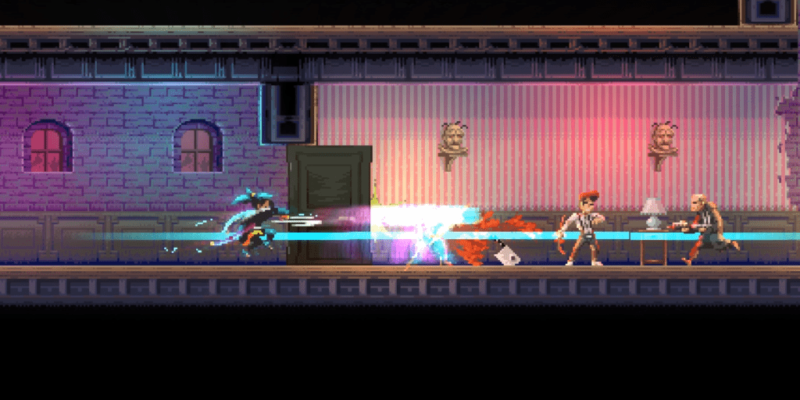 Katana ZERO scratches one of those eternal itches of gaming. It lets you be a master swordsman of superhuman caliber: bounce off a wall, deflect a bullet back at the gunman with a perfectly-timed sword swing, roll under a shotgun blast, and then cleave its wielder in two.

From what I’ve played, it also makes this extraordinarily satisfying. It does this by being bastard hard. I don’t like making direct comparisons to other games too often – it’s lazy writing, frankly – but Katana ZERO wears a lot of Hotline Miami inspirations on its sleeve.

Caked in gore? Check. Use of one-shot environmental pickups as ranged weapons? Check. A single hit kills you and basically every enemy? Check. Death returns you to the start of the section? Check. A lot of 80s theming, with VHS tapes used for levels and visual effects? Check. Electronic and synth music? Check. Segments between levels that reveal parts of a plot, which may actually be the written equivalent of a jigsaw designed by MC Escher? Big check. 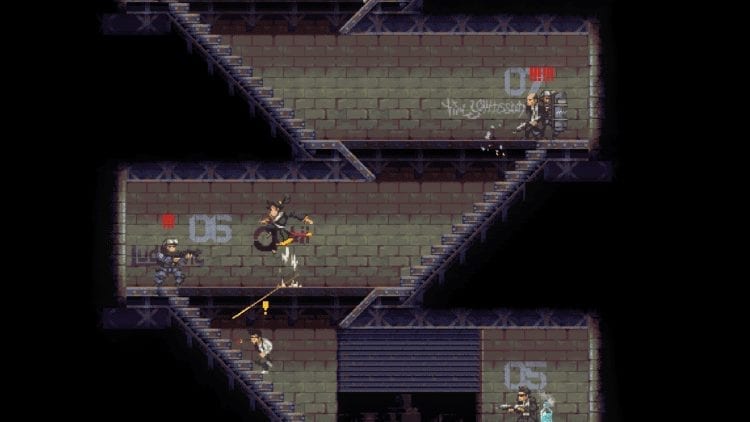 This is what we in the assassin business call “a bit of a pickle.”

Katana ZERO is still very distinctly its own game, though. In gameplay terms, the side-on perspective gives it a unique, platform-y feel, and there are plenty of aerial acrobatics to be performed. More to the point, though, is that your protagonist has two very useful abilities: an invincibility-granting roll and the power to slow time for limited periods.

At first, this feels somewhat overpowered: it makes deflecting bullets and dodging attacks all too easy. Later, when you ascend a set of stairs guarded by three rifle-wielding soldiers and some guy with a riot shield, you have to be both careful and clever to survive. At this point, slowing time is far from a guarantee of success. Thankfully, death is little more than a slap on the wrist. It returns you to the start of the section, so you’ve usually lost – at most – 30 seconds.

The entire game is rendered in beautifully animated pixel art, which adds another little stylistic twist to the proceedings. The violence, too, is oddly beautiful: blood splatters onto the background, leaving a trail of crimson destruction in your wake.

So far, at least, every level has also offered some unique touches to the gameplay experience. While the first level is a pretty basic “kill everyone, go to exit”, every level since has mixed things up. One level has both background and foreground elements, and heading out onto the balcony is required. Another requires you to sneak your way through a busy nightclub by mingling, Assassin’s Creed style, with the dancers. Yet another has you tasked with not killing anyone except the target, demanding heavy stealth. Each level has gradually added new factors and taught new uses for your abilities, but in a very natural way, rather than with a giant text box saying “YOU NEED TO ROLL PAST MURDER LASERS.”

Battle Without Honor Or Humanity 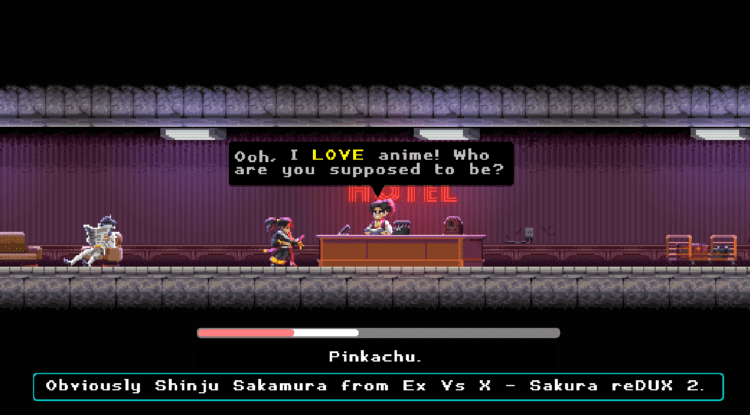 I mean, OBVIOUSLY. I guess you’re just not cool enough to keep up with the latest anime.

Another neat touch is in the dialogue options. With this being preview code, I have no idea if these actually impact things (barring other dialogue options, I guess), but the between-level segments offer plenty of these. Before each mission, the protagonist – codenamed the Dragon – goes to visit his psychiatrist to receive medication and discuss his increasingly weird dreams. Said psychiatrist then issues him with his next assignment, and it’s onto the carnage. And then, post-murder spree, the Dragon returns home or goes out for a drink. All of this gives insight into both the setting and the story.

It’s up to you how cooperative you want to be in these segments. You can talk frankly with the psychiatrist or cut him off at every turn. You can befriend the little girl who lives in the apartment next to yours or blank her completely. And that stealth level I mentioned? Well, you don’t actually have to be stealthy. As noted, though, I don’t know if these choices will actually impact the story or progression much, or if they’ll just tie into particular achievements and maybe change the dialogue. Still, they do at least feel like they have some impact. I talked my way past a hotel receptionist by claiming to be a cosplayer; on leaving the gore-soaked scene, she assured the suspicious police that I was a cosplayer and not the serial killer they were hunting. Would things have changed if I’d said something else? Maybe, maybe not. 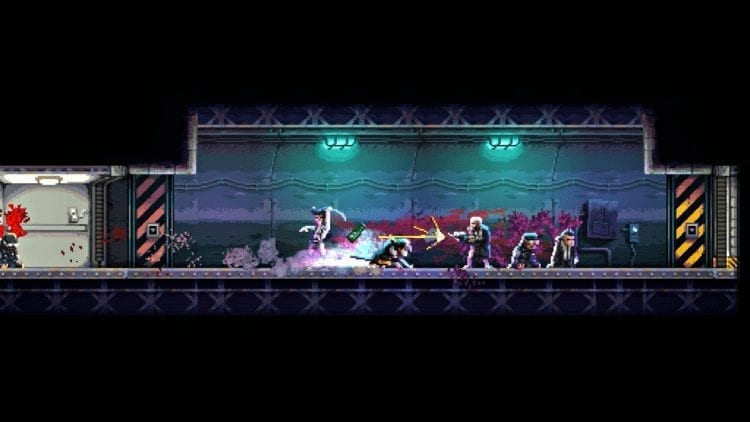 I want to go back to the feel and atmosphere, though, because it’s always the little details that heighten things for me. There’s a brief pause, a flash, and some screen shake (most of which you can disable) when your sword connects with a foe. The little detail of the Dragon putting on his headphones and pressing play on his cassette player to kick off the level’s music is lovely. And I do love the mashup of 80s aesthetic and cyberpunk/neo-noir dystopia, with drugs and shady dealings and status-segregated districts and ninja assassins all mixed in with the bright lights of a shining city.

I’m also amazed that the time-slowing mechanic hasn’t actually been essential thus far. Bullets are absurdly fast if you’re not using it, for sure. But you can still time a sword swing to deflect them without having to slow time. After getting murdered a bunch of times near the end of a level, I found that I had the timing down for the start of the level. I could cut through everything in my path through sheer muscle memory, deflecting bullets and disemboweling foes without once resorting to slowing down. And it felt good.

And, y’know, you don’t have to do that. While levels are time-limited, it’s a very generous timer. Your time-slowing powers recharge, so you can inch forward bit by bit and play carefully… but that’s no fun. The fun is in engaging five people at once, deflecting bullets and rolling under attacks, and dispatching the lot of them in two seconds flat. Most levels also offer a variety of options and paths, so you can always try something else out.

A Look At The Future 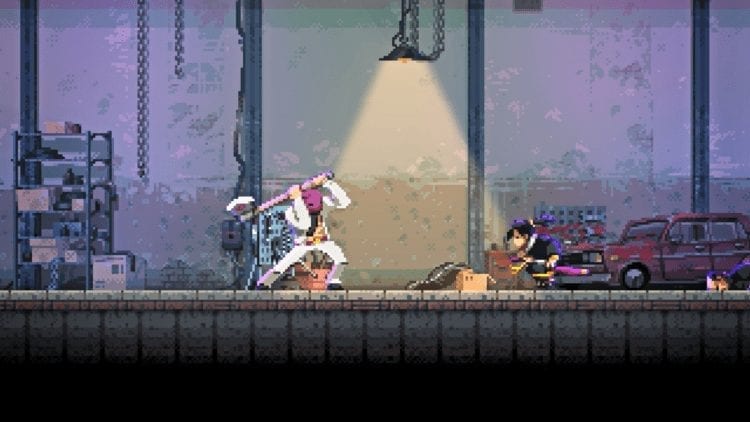 This boss battle marked the end of my preview time with Katana Zero. As you might expect, I died quite a lot.

I’m curious as to how far the rest of Katana ZERO will push these mechanics past what I’ve seen in the preview, and if we’ll get new time-manipulating powers. I’m also curious as to how long it’s going to be, because I get the sense this might be a fairly short game with an emphasis on replaying levels for the sake of speed and… well, just being cool. Hotline Miami balanced this out with collectibles; maybe this will too, or maybe there really are alternate paths. Either way, there’s still triumph found in redoing a section that took you 10 minutes of retries in under 20 seconds, without breaking a sweat, simply because you’re now that good.

Other than my worry about a short-but-sweet length, I have one or two nagging issues with the controls. Pretty much everything works perfectly with a mouse and keyboard, except for the dodge roll. This is triggered by pressing a direction and down, which is absolutely fine… unless you’re on a platform that you can drop down from, in which case you will drop down. There is a separate Roll key, but I have yet to find a comfortable and instinctive place to put it.

Katana ZERO is definitely one to keep an eye on. There are Hotline Miami vibes for sure, and also more than a touch of turn-based ninja platformer Ronin. From what I’ve played, though, these comparisons don’t really do it justice. Katana ZERO is its own game, and it’s one that simply bleeds style.