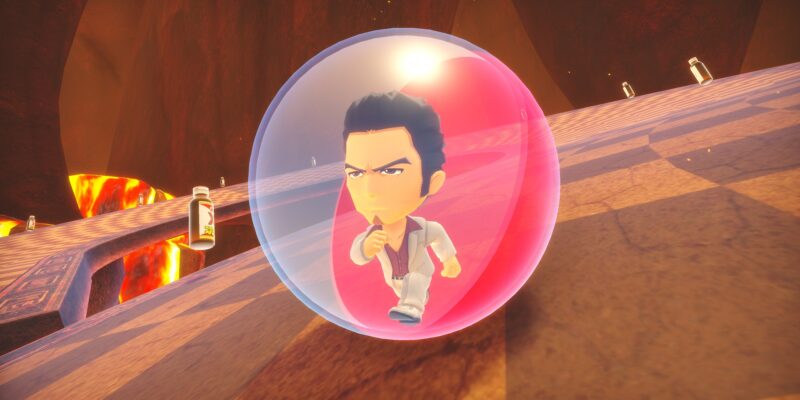 Earlier this month, Sega revealed that classic characters such as Sonic, Tails, and Beat from Jet Set Radio will join the playable cast of monkeys in the upcoming Super Monkey Ball Banana Mania. Although these characters will not change up the gameplay in any significant way, they nonetheless serve as fun nods to Sega’s extensive history. But as it turns out, Sega did not stop with just adding Sonic, Tails, and Beat to the game. The company announced that Kazuma Kiryu, the main protagonist of the Yakuza series, will join Super Monkey Ball Banana Mania as well.

Much like with Beat, Kiryu sports a new chibi look so as to not look out of place in the Super Monkey Ball world. In his new trailer, Kiryu stoically rolls through classic Super Monkey Ball stages with the Yakuza Kiwami remix of “Funk Goes On,” the main battle theme of the first Yakuza game, playing in the background. Dedicated Yakuza fans will notice that, instead of collecting bananas, Kiryu collects bottles of Staminan X, a nod to the Yakuza series.

Kiryu leaving Kamurocho again — the significance of this crossover

For a long time, Sega seemed reluctant to reference the Yakuza series despite its usual eagerness to reference even the most obscure Sega IPs in its games. Even the Sonic & Sega All-Stars Racing duology, which extensively explored the deepest parts of Sega’s history, lacked even a passing mention of Yakuza. But now that Yakuza has become exponentially more popular in the West, it seems that Sega finally feels more comfortable with representing the series in its latest games. Yakuza 0 is when the franchise finally started hitting its stride in the West. As a prequel to the 2005 original, it was a good way for new players to get introduced to Kiryu and the gang.

The addition of Kiryu in Super Monkey Ball Banana Mania appears to be proof of that, which is fortunate for diehard Yakuza fans, especially those who have stuck with the series since its inception on the PS2.