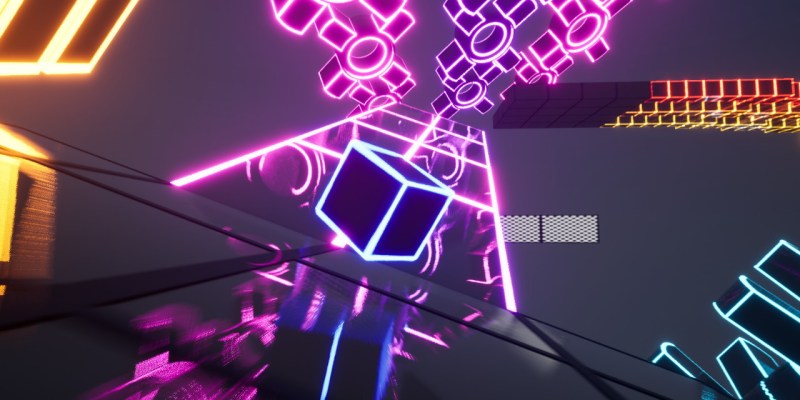 Physics-based racing games have been around for years. I’m not talking about Forza Horizon or Asseto Corsa, but rather racing platformers like Super Monkey Ball and Marble It Up! These games have you roll around while attempting to avoid obstacles and navigate your way to the end of each stage as fast as possible. The genre isn’t overly represented on PC, but the topic of today’s review, Kinetic Edge, could help solve that.

Kinetic Edge is developed by SCT, an indie studio that began found its footing after developing the Half-Life mod Prospekt. In 2018, it released the well-received Gunsmith, an early access arms manufacturing tycoon game. From FPS mod to tycoon simulation, SCT hasn’t been afraid to try out new ideas. And Kinetic Edge continues that approach with the studio’s first deep dive into platforming. Considering that this is its first attempt, Kinetic Edge shows a lot of promise.

One of the defining mechanics of Kinetic Edge is shapeshifting. Throughout stages, you will occasionally pass through markers that change what shape you become. Every stage will start you off as a sphere but you can switch to a pyramid, cube, cylinder, icosahedron, prism, and a molecule lookalike.

These all interact with obstacles differently and affect how you approach each course. I think this mechanic works well enough, but is somewhat negated by how overpowered jumping is. It doesn’t matter if you’re a sphere or a pyramid. You can usually just spam the jump button to bypass obstacles. Obviously, this doesn’t apply to anything timing-based, but for general parkour, obstacles are easy to avoid regardless of shape. Putting a limit on how often you can jump would help offset this issue. 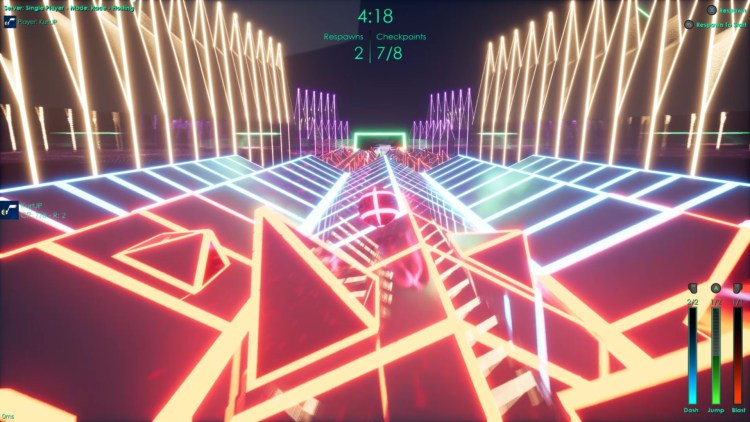 Otherwise, players also have the choice to dash and blast. The dash feature is an ability that lets you speed over or around various obstacles. This is useful when you’re at risk of falling short on a difficult jump.

Meanwhile, the blast ability is only useful in multiplayer. It can be used to knock back nearby opponents. This is honestly peak trolling material, as you can ruin someone’s day as they navigate a tight, tricky obstacle. When timed properly, you can even double-boost on top of an enemy and nuke blast them off the course. A real friendship breaker for sure, but well worth it for a good laugh. 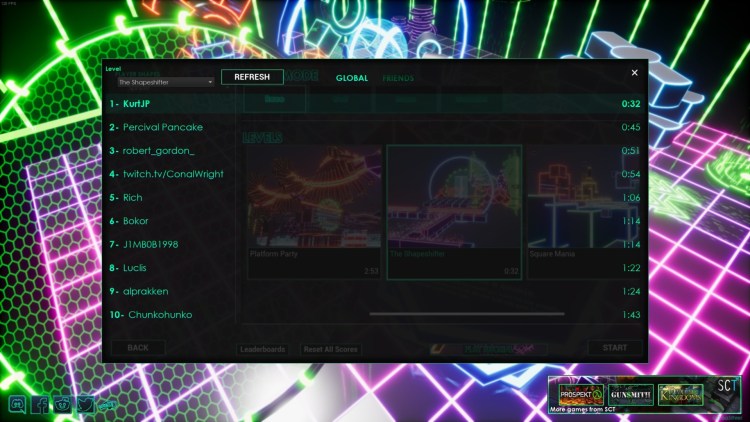 Let it be known that I was first in the world on the Shapeshifter stage in Kinetic Edge. It might not last long, but I’m claiming it regardless.

Of these two abilities, I think blast is better implemented. The dash does work fine and is integrated into most levels well, but it can take away from the challenge. I remember when SEGA made the controversial choice to add a jump function into Super Monkey Ball. It wasn’t received well, as it took away from the franchises’ iconic physics-based level design. Similarly, I think that Kinetic Edge would be a more fulfilling game if dash didn’t exist.

The physics do feel just right though in most cases. It’s also easy to pick the game up and quickly figure out what you can and can’t get away with. But once you realize that you can often just dash over and ignore half of each level, it feels like a waste given that you can tell a lot of effort and time was put into the level design. And when I took my time to complete levels without using the dash feature, I often enjoyed them more. But doing so goes against the whole idea of settings the best time possible.

Kinectic Edge has four different game modes to explore: Race, Golf, Maze, and The Gauntlet. First and foremost, Race is the core mode that Kinetic Edge is built upon. You are tasked with simply finishing a level in as short a time as possible. Each level has several checkpoints and usually takes a couple of minutes to finish. If you play online, this mode acts similarly to something akin to Trackmania. It’s simple, but fun to see how you fare against others.

If you’ve played Golf With Your Friends, you’ve played golf in Kinetic Edge. Mechanically speaking, it’s almost identical and is effectively just another decent mini golf simulator. There are some slight annoyances though that can interfere with gameplay. Perhaps most notable is the camera clipping through walls and occasionally impeding your view of the course. Otherwise, this is a perfectly serviceable game mode that is best enjoyed with friends. 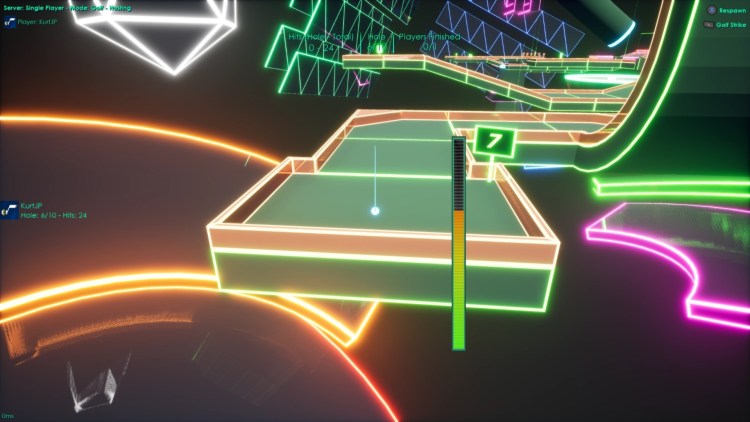 Maze is perhaps the worst overall mode. As the name suggests, it requires you to navigate a maze. The quicker you find the exit, the better. This game mode tends to only produce one of two outcomes. One, you don’t know the route, and just follow the left wall until you complete it. Or two, you do know the optimal route, and it’s over in well under a minute. It’s functional, but I don’t overly recommend playing this.

Finally, there’s the Gauntlet. This is similar to the race mode, but adds a slight competitive feel that helps differentiate it. In the Gauntlet, there are no checkpoints and the timer counts down instead of up. If you fall off the map, you start all the way from the beginning. If the timer runs out, you fail. I enjoy playing this a lot as it reminds me of the fantastic Hill Climb mode in Trials Rising. Although be aware that it can get awfully frustrating and will require many attempts to perfect.

At a glance, Kinetic Edge‘s most defining trait is very apparent. Its visual design is something special. Everything you look at is neon-lit and highly reflective which creates a futuristic, almost ray tracing like appearance. It’s what I would imagine Geometry Wars would have looked like if it was 3D. And I have to say it results in a genuinely beautiful game with some of the most striking visuals I’ve seen in a while.

However, this art style isn’t without its problems. The sheer quantity of reflective surfaces creates areas that can be confusing to navigate. I’d consider it something akin to those mirror mazes you probably explored as a kid. At times this can make it difficult to figure out where you’re going or even what direction you’re facing. This isn’t an issue that arises at every stage, but it’s common enough to be a problem. 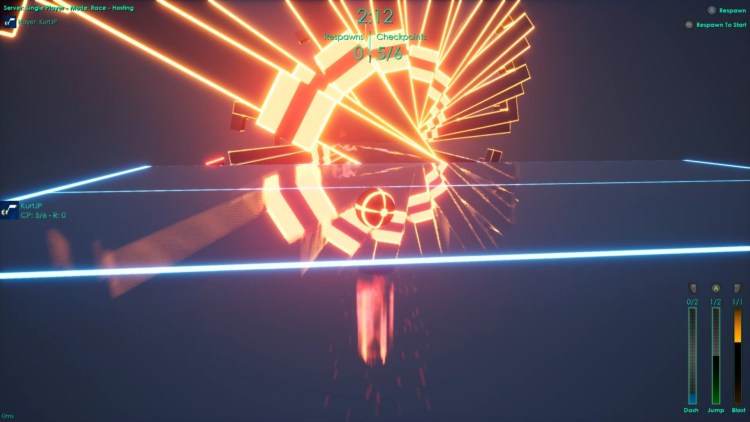 As for performance, I have nothing to complain about. There’s a wide range of resolutions supported. Players also have the choice to tweak shadows, anti-aliasing, textures, and effects separately. Most modern gaming PCs should be able to run Kinetic Edge on max settings easily as, during this review, I never dropped below a locked 120 fps. This is great as Kinetic Edge‘s precision platforming benefits greatly from its silky-smooth performance.

As a player who spent most of his time reviewing Kinetic Edge on a controller, I did notice one big problem. By default, the controller analog stick sensitivity is way too high. This is particularly annoying during the Golf mode where minor adjustments are necessary to line up shots. There is currently no option in-game to tweak sensitivity, so the only solution is to use third-party software. Given that Kinetic Edge gives you the option to toggle Xbox or PlayStation control overlays, which is surprisingly absent in most games, I’d put this down to being an oversight rather than laziness. This isn’t as bad If you play on mouse and keyboard, as you can use a DPI switch to work around the issue.

Kinetic Edge is not a medium changing game by any means. It sets out on achieving the simple goal of being a fun and easily accessible physics-based platformer. If that’s what you’re looking for, there’s plenty enough to enjoy. Its gorgeous visuals, natural feeling physics, and variety of game modes should keep you entertained for a while. However, there are a fair few limitations to its gameplay, and not all of the available content is equally fun to play. Regardless, this is an overall good effort and is certainly worth checking out.

Even though Kinetic Edge is by no means spectacular, it does achieve what it sets out to do. This is a platformer that is easy to get into, which can be great fun with some friends. Its striking visuals also help differentiate it. Despite its shortcomings, there are more positives than negatives on display. All in all, it is a good game that comfortably justifies its price tag.

Where to find all the mystery box locations in Firebase Z